The coats of arms of Ulrich II of Cilli

The Counts of Cilli[1] or Celje represent the most important medieval aristocratic and ruling house with roots and territory in present-day Slovenia. When the house died out its head held the rank of prince of the Holy Roman Empire and many other titles in territories of present-day Central Europe. They ruled areas of what is now Slovenia as well as parts of surrounding countries from the thirteenth to fifteenth centuries, rivaling the Habsburgs for some of this time. Families such as the Celje, who ruled and administered territory over a long period, helped to maintain political stability while their subjects also developed a cultural identity.

It would not be until 1992 that Slovenia would again be governed by Slovenians, when it broke away from Yugoslavia, of which it had been a constituent republic since 1918. Memory that the Counts of Celje had not only governed Slovenia but other lands as well continued to inspire Slovenian's desire to reunify their territory, and to gain their freedom. Yet, equally conscious of belonging to a wider world within which the Counts of Celje as princes of the Holy Roman Empire had also operated, they quickly joined a larger community of nations, the European Union. They did so, however, as a nation among nations, not as a nation under another nation; most Slovenians saw Serbia as dominating the rest of Yugoslavia. The Counts of Celje's coat of arms was incorporated into Slovenia's in 1991, in honor of their role in the history of Slovenia. 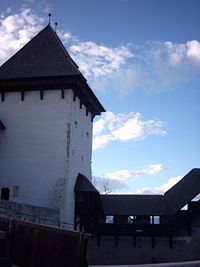 The name "Counts of Cilli" (von Cilli) was given to the Lords of Sanneck or Sannegg by Emperor Louis IV in 1341 and was derived from the medieval name Cilli of the city of Celje in Lower Styria. Celje itself became a property of the dynasty in 1333. Most of the information about this chapter of European history comes from The Chronicles of Celje, a document written after 1435, translated and published in 1883 by F. Krones.[2]

Their rise to a powerful family started in the small castle of Sannegg or Sanneck, on the river Sann, today's Savinja river, at Braslovče in the Upper Savinja valley[3], but in a short period of time they owned more than 20 castles all over the territory of modern Slovenia and beyond through the marriages of their daughters. The dynasty began with Gebhard I de Saun in 1130.[4]

In the fourteenth century they allied with the Habsburgs in their war against the counts of Gorizia-Tirol, making Cilli vassals of the Habsburgs in 1308. Acquiring large estates in the adjoining duchies of Styria, Carinthia, and Carniola as well as in the territories of the Hungarian crown (Croatia, Slavonia) their influence rose, making them one of the most powerful families in the area.[5] They were related by marriage with rulers of Bosnia and Polish and Hungarian kings.

Savior of the King

Their rapid rise started after the Battle of Nicopolis (1396) where Hermann II of Cilli saved the life of Sigismund of Luxemburg (Hungarian king, from 1433 Holy Roman emperor). As a reward king Sigismund donated (1397-1399) the city of Varaždin, the county of Zagorje, and many estates in present-day Croatia to the family. As their power grew, the Counts "minted their own money" as well as constructing "castles and churches."[6]

The House of Cilli and Sigismund became even closer through the marriage of Hermann's daughter Barbara of Cilli to King Sigismund. Barbara was actively involved in political and the economic matters, independently administering large feudal fiefdoms and taxes. She was also instrumental in creating famous royal Order of the Dragon, a monarchical chivalric order for selected nobility. She served as the regent of the Hungarian kingdom in the absence of her husband.

In 1436 the Emperor elevated the counts to the rank of princes of the Holy Roman Empire (although they retained their title of Count). This resulted in the Habsburg regarding them as among their strongest rivals[7] and they reacted with a war that lasted until 1443, when an agreement of mutual inheritance was signed. The Celje were the only ethnically Slovenian noble family at this time, and they competed for supremacy with the Habsburgs for two centuries.[8]

Keeper of the young king

Ulrich II of Cilli was the most powerful member of the Cilli family. He was influential in many courts, which originated from the relationships the Cilli family had made in the past. He ran the family's affairs from his grandfather's death in 1435; "his father, Frederick, seems not to have minded and lived a life of retirement in a Slavonian castle."[9] He tried to obtain the regency of Hungary, Bohemia and Austria through controlling Ladislas the Posthumous, at the time a minor. With such ambitions, he also made many enemies, such as the Hunyadi family. After an unsuccessful claim to the Bosnian crown, Cilli obtained some territories in Croatia and Slavonia and finally succeeded in forcing Frederick III, Holy Roman Emperor to hand over (1452) the boy king Ladislas the Posthumous to his keeping. Practically, this made Ulrich II the ruler of Hungary.

In 1456, when his rival John Hunyadi died, Ulrich II was named Captain General of Hungary, an office that Hunyadi had previously. This prompted a plot, by the Hunyadi family against him, and he was assassinated on November 8, in Belgrade.

With the death of Ulrich II the male line of the Counts of Cilli died out, and after a war of succession all of their estates and property were handed over to the Habsburgs on the basis of the inheritance agreement. The Habsburgs then "expanded their authority over the whole of Slovene ethnic territory."[10]

Part of their coat of arms - the three golden stars on a blue background, which, as Lords of Sanneck, they had inherited from the once powerful Carinthian Counts of Heunburg upon their becoming extinct in 1322 - was incorporated into the Slovenian coat of arms in 1991. It is also the current coat of arms of Celje. Their rule " united almost the entire Slovenian territory that is known today."[11] The Celje were the "the last great medieval dynasty to have its seat on Slovene territory."[12] Under Habsburg rule, Slovenia was divided into a number of administrative units, including the Counties of Gorizia and Gradisca and Lower Styria.

For three hundred years, the Counts of Celje were among Europe's most important and powerful ruling families.[13] "The first drama in Slovenian is believed to have been a work written in 1817 entitled "Ulrich, Count of Cilli," which suggests that their legacy remains important for Slovenian national identity.[14]

After the end of Celje rule, Slovenia was governed as a province of successive entities, as well as co-founding what became Yugoslavia. In June 1991, after the introduction of multi-party representative democracy, Slovenia split from Yugoslavia and became an independent country. Yet, just as even under the Counts of Celje, the Slovenes were also consciously part of the wider Balkans, so, as a sovereign nation they have identified strongly with other people in Europe, becoming a member state of the European Union in 2004. Slovenian nationalism took them "away" from "Yugoslavia"; "they wanted to reduce the bonds tying them to the other nationalities, especially the Serbs."[15] Centuries of political domination by others increased their desire for freedom. Yet their consciousness of being part of a wider space then led them to join the European Union, where they relate with other states on the basis of equality, as a "nation among nations."

The Lords of Sanneck or Barons of Soune, Counts of Cilli Counts of Cilli in the structure of the Holy Roman Empire, illustration from the Nuremberg chronicles.

Retrieved from https://www.newworldencyclopedia.org/p/index.php?title=Counts_of_Celje&oldid=1066992
Categories:
Hidden category:
This page was last edited on 7 April 2022, at 01:03.
Content is available under Creative Commons Attribution/Share-Alike License; additional terms may apply. See Terms of Use for details.