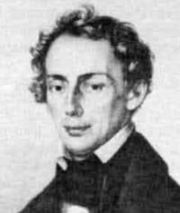 Johann Christian Andreas Doppler (November 29, 1803 – March 17, 1853) was an Austrian mathematician and physicist. He was the first to quantify the change in frequency of a wave motion experienced by an observer moving relative to the medium in which the waves occur. Doppler's name has become linked to a wide range of phenomena relating to both sound and light waves, and many are familiar with the term "Doppler radar" used for weather reports. Moreover, the impact of Doppler's work on astronomy has been enormous, particularly as the Doppler effect has been applied to measure the relative velocity between the Earth and distant stars.

Christian Doppler was born in Salzburg, Austria, the son of a well-to-do stone-mason, Johann Evangialist Doppler and his wife, Therese. Doppler was not of strong constitution and did not follow his father into the construction trades. Instead, he was allowed to follow an academic career. His father asked the advice of Simon Stampfer, a local educator, as to the boy's future. Stampfer recognized Doppler's potential and recommended that his father send him to Vienna to further his education (Maulik 1997, 2).

After completing high school, Doppler spent three years at the Polytechnic Institute in Vienna, and returned to Salzburg, where he continued his studies while tutoring mathematics and physics. He graduated in 1829, and returned to the Polytechnic Institute in Austria for four years, where he taught higher mathematics. It was during this period that he wrote his first papers in mathematics and electricity.

Relative speed and the frequency of light

Unable to find a teaching position after leaving the Polytechnic, he contemplated a move to the United States. But after making preparations for the trip, he unexpectedly secured a post in 1835, as professor of mathematics and accounting at the State Secondary School in Prague. In 1841, he was employed at the State Technical Academy as a mathematics professor. A year later, in 1842, he read his first work on the changes in frequency of waves through a medium measured by an observer moving with respect to the waves' source. This has come to be known as the Doppler effect.

In air or water, small displacements produced by disturbances are conveyed to adjacent portions of each medium until the appearance of a large motion is produced. In this way, sound is transmitted from the origin to the hearer, not through bulk displacements of air, but rather through vibrations that the air transmits. The same happens with waves in a puddle, which radiate from a dropped pebble. The motion of the wave is only apparent, the real motions being small displacements in each portion of the water's surface through which the wave passes.

The wave theory of light was current during Doppler's time. This theory held that light is transmitted by wave motion through a medium that scientists called the ether. This theory tied each color of the spectrum with a particular wave frequency—the number of waves that pass a particular point in a second. The frequency of sound waves, on the other hand, is connected with the pitch of a sound, the higher frequencies being associated with the higher pitched sounds. Sound waves have a frequency of thousands per second, but light waves are much closer together and move much faster, producing frequencies of a vastly higher order.

On May 25, 1842, Doppler presented a paper before the Royal Bohemian Society of Sciences entitled "On the colored light of the double stars and certain other stars of the heavens."[1] His work was an extension of that of James Bradley, the eighteenth century astronomer who measured the speed of light by analyzing the effect of the Earth's orbit on the apparent positions of stars.

In Doppler's own words, "…nothing seems to be more intelligible than that, to an observer, the path length and the interim durations between two consecutive breakings of a wave must become shorter if the observer is hurrying toward the oncoming wave, and longer if he is fleeing from it…" (Schuster 2005, 63).

Two investigators, C.H.D. Buys-Ballot in 1845, and John Scott Russell in 1848, verified Doppler's prediction with respect to sound, by observing the changes of pitch with a change in relative velocity between the hearer and the origin of sound. But Buys-Ballot also criticized Doppler's assumptions about the change in color of stars, emphasizing that the entire range of colors in the spectrum would change, but in combination would still produce white light. Doppler's contention about starlight was also shown to be lacking on another ground. A color change, if it were to occur, would be so slight, due to the great velocity of light as compared with any possible stellar motions, as to be undetectable by the eye.

In 1847, the Italian astronomer Benedict Sestini published a catalog of star colors and addressed some of Doppler's ideas.

Doppler's principle was applied more effectively in a presentation by H. Fizeau in 1848, who discussed the effect that velocity would have on the position of so-called Fraunhofer lines, which mark specific frequencies in the light spectra. Twenty years would pass before Fizeau's ideas were translated into actual measurements.

Doppler continued to elaborate on his theory, as well as publishing numerous papers on other topics, particularly optics. In 1843, he was made a full professor, and in 1846, he published equations applicable to the case in which both the observer and the wave source were in motion.

Doppler was unsure regarding the application of his principle to transverse waves, where the undulatory motion is perpendicular to the direction of wave propagation, such as the up-and-down motion of sea waves. This was an important case, since it was believed that light waves were transverse waves. It was successfully addressed by the mathematical physicist B. Bolzano, who announced his findings shortly after Doppler's first paper on the subject appeared. Bolzano, who was a colleague of Doppler in Prague, predicted that Doppler's principle would enjoy great utility in determining the velocity and other characteristics of stellar objects (Merz 1912, 10).

Doppler's principle would later find important applications in both the theory of light and of sound (Campbell 1913, 12-15).

In 1846, Doppler calculated the resolution that could be obtained with a photographic plate, estimating that it was 40,000 times more susceptible to impressions than the human eye. He thus recommended that astronomers concentrate on magnifying the image made on a photographic plate by a stellar or planetary object through a telescope, instead of trying to increase the telescope's power, which he believed was reaching its limit.[2]

Doppler's research career in Prague was interrupted by the revolutionary incidents of March 1848, when he fled to Vienna. There, he was appointed head of the Institute for Experimental Physics at the University of Vienna, in 1850. During his presence at the University of Vienna, Doppler, along with Franz Unger, played an influential role in the development of young Gregor Mendel, who later laid claim to the title as the founding father of genetics.

Doppler died from a pulmonary disease in Venice, at age 49 on March 17, 1853. His tomb can be found in the city of Venice, Italy, just inside the entrance to the island cemetery of San Michele.

Some scientists have argued that Doppler's principle was merely an extension of that of Ole Roemer, who by measuring the fluctuations in the apparent periods of revolution of Jupiter's moon's in the 1600s, showed that light had a finite velocity. Doppler did take an additional step, however, in applying the wave theory of light to the effect that a variation in velocity would have on the observer of a light source.

As the history of science often demonstrates, it is a small step that sometimes has an inordinate impact on scientific progress. Doppler's name is practically a household word, with weather reports relying on "Doppler radar," while his name remains connected with a wide range of phenomena relating to both sound and light waves.

The power of the Doppler principle, defined more clearly by Fizeau, was taken a step further by British astronomer William Higgins, who in 1868, applied the Doppler effect to obtain concrete measurements of the relative velocity between the Earth and stars from the shift in spectral lines.[3] Since that time, the impact of Doppler's work on astronomy has been enormous.

Retrieved from https://www.newworldencyclopedia.org/p/index.php?title=Christian_Doppler&oldid=1003319
Categories:
Hidden category:
This page was last edited on 18 February 2017, at 20:57.
Content is available under Creative Commons Attribution/Share-Alike License; additional terms may apply. See Terms of Use for details.