Brachiosaurus is an extinct genus of huge, sauropod dinosaurs that lived during the late Jurassic period. Sauropods comprise a suborder or infraorder of the saurischian ("lizard-hipped") dinosaurs, and in general were large, herbivorous dinosaurs. Brachiosaurus, which means "arm lizard," (from the Greek brachion/βραχιων meaning "arm" and sauros/σαυρος meaning "lizard") was so-named because the forelimbs were longer than the hind limbs. Brachiosaurus has become one of the most famous groups of all dinosaurs and is widely recognized worldwide.

Brachiosaurus represented one stage in the history of life. When the age of dinosaurs was over, it gave rise to a new stage that prepared the foundation for the modern earth, with the ascension of mammals and birds. For young earth creationists (YEC), the presence of dinosaurs such as Brachiosaurus represents a problem, for their appearance 150 millions years ago conflicts with the YEC's belief in an Earth only thousands of years old. But for most religious adherents, there is no conflict between their religious beliefs and an Earth billions of years old, which passed through various stages leading to the appearance of human beings.

Brachiosaurus was a sauropod (Sauropoda), a group of large, four-legged, plant-eating, dinosaurs with long necks, relatively small heads and brains, and generally long tails. Unlike other sauropods, Brachiosaurus had a giraffe-like build, with long forelimbs and a very long neck. Brachiosaurus had spatulate teeth (resembling chisels), well-suited to its herbivorous diet. Its skull featured a number of holes, probably aiding weight-reduction. The first toe on its front feet and the first three toes on its hind feet were clawed.

Brachiosaurus traditionally had been characterized by its distinctive high-crested skull, but many scientists now assign the specimen which this depiction was based on to the genus Giraffatitan.

One complete Brachiosaurus skull is known. O. C. Marsh used it on his early reconstructions of Apatosaurus. Carpenter and Tidwell studied it in 1998 and found that it belonged to one of the North American Brachiosaurus species. The skull of Brachiosaurus is more camarasaur-like than the distinctive high-crested skull of Giraffatitan and it lends support to the opinion that Giraffatitan is a distinct genus.

For many decades, the brachiosaurs were the largest dinosaurs known. It has since been discovered that a number of giant titanosaurians (Argentinosaurus, for example) surpassed brachiosaurs in terms of sheer mass. More recently, another member of the same family, Brachiosauridae, but different genus, Sauroposeidon, has been discovered that seems likely to have outweighed the known brachiosaurs, albeit on incomplete fossil evidence. 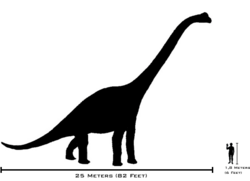 Size comparison between Brachiosaurus and a human

Brachiosaurus is often considered to be the largest dinosaur known from a relatively complete fossilized skeleton. However, the most complete specimens, including the Brachiosaurus in the Humboldt Museum of Berlin (excavated in Africa, the tallest mounted skeleton in the world), are members of the species Brachiosaurus brancai, which some scientists now place in the genus, Giraffatitan.

The holotype material of the type species, Brachiosaurus altithorax, includes a sequence of seven posterior dorsal vertebrae, sacrum, proximal caudal vertebra, coracoid, humerus, femur, and ribs—enough from which to estimate size. Based on a complete composite skeleton, Brachiosaurus attained 25 meters (82 feet) in length and was probably able to raise its head about 13 meters (42 feet) above ground level. Fragmentary material from larger specimens indicates that it could grow 15 percent longer than this. Such material includes an isolated fibula HMN XV2, 1340 centimeters in length, as well as the brachiosaurid scapulocoracoid referred to Ultrasaurus.

Brachiosaurus had been estimated to have weighed anywhere between 15 metric tons (Russell et al. 1980) and 78 tons (Colbert 1962). These extreme estimates can be discarded as that of Russell et al. was based on limb-bone allometry rather than a body model, and that of Colbert on an outdated and overweight model. More recent estimates based on models reconstructed from osteology and inferred musculature are in the range 32 tons (Paul 1988) to 37 tons (Christiansen 1997). The 15 percent longer specimens hinted at above would have massed 48 to 56 tons.

Like other "long-necked" dinosaurs, Brachiosaurus may not have been able to pump sufficient oxygenated blood from its heart to its brain if it raised its head high above its shoulders, though this is disputed by some researchers.

If Brachiosaurus was endothermic (warm-blooded), it would have taken an estimated ten years to reach full size. If it were instead poikilothermic (cold-blooded), then it would have required over 100 years to reach full size. As a warm-blooded animal, the daily energy demands of Brachiosaurus would have been enormous; it would probably have needed to eat more than 400 lb. (~200 kg) of food per day. If Brachiosaurus was fully cold-blooded, or was a passive bulk endotherm, it would have needed far less food to meet its daily energy needs. Scientists now believe that like most large dinosaurs, it was a gigantotherm. Gigantothermy refers to the phenomena were large, bulky ectothermic (cold-blooded, controlling temperature through external means) animals are more easily able to maintain a constant, relatively high body temperature than smaller animals by virtue of their greater volume to surface area ratio. A bigger animal has proportionately less of its body close to the outside environment than a smaller animal of otherwise similar shape, and so it gains heat from, or loses heat to, the environment much more slowly. 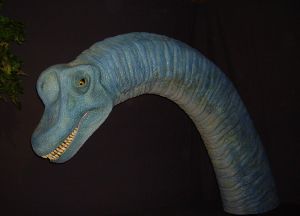 Brachiosaurus was one of the largest dinosaurs of the Jurassic period; it appeared to have lived on prairies filled with ferns, bennettites, and horsetails, and it moved through vast conifer forests and groves of cycads, seed ferns, and ginkgos. Some of its contemporary genera included Stegosaurus, Dryosaurus, Apatosaurus, and Diplodocus. While it is speculated that groups of Brachiosaurus moved in herds, fully grown individuals had little to fear from even the largest predators of the time, Allosaurus and Torvosaurus, on account of their sheer size.

Brachiosaurus nostrils, like the huge corresponding nasal openings in its skull, were long thought to be located on the top of the head. In past decades, scientists theorized that the animal used its nostrils like a snorkel, spending most of its time submerged in water in order to support its great mass. The current consensus, however, is that Brachiosaurus was a fully terrestrial animal. Studies have demonstrated that water pressure would have prevented the animal from breathing effectively while submerged and that its feet were too narrow for efficient aquatic use. Furthermore, new studies by Larry Witmer (2001) show that, while the nasal openings in the skull were placed high above the eyes, the nostrils would still have been close to the tip of the snout (a study which also lends support to the idea that the tall "crests" of brachiosaurs supported some sort of fleshy resonating chamber). 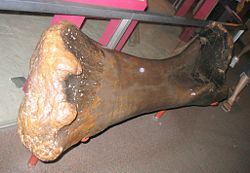 The front leg bone of a Brachiosaurus.

The first Brachiosaurus was discovered in 1900 by Elmer S. Riggs, in the Grand River Canyon of western Colorado in the United States. B. altithorax is the type species and is known from two partial skeletons, the one recovered in Colorado and one recovered in Utah. It lived from 145 to 150 million years ago, during the Kimmeridgian to Tithonian faunal stages of the late Jurassic period.

The species B. alataiensis de Lapparent & Zbyszewski, 1957, is known from back bones (vertebrae), and parts of the hip and limbs, which were recovered in Estremadura, Portugal. It lived about 150 million years ago, during the Kimmeridgian. However, recently B. alataiensis, which was originally described by Lapparent and Zybszewski in 1957, has been reclassified to a new genus, Lusotitan and the type species is now known as Lusotitan atalaiensis.

Another species, B. nougaredi de Lapparent, 1960, is known from a set of fused bones over the hip (sacrum) and parts of a forelimb, which were recovered in Wargla, Algeria in Africa. It lived 100 to 110 million years ago, during the Albian to Cenomanian ages of the middle Cretaceous period. However, this may not be a distinct species.

Historically, the best specimens of Brachiosaurus were from the species B. brancai, which was found in the Tendaguru Beds of Tanzania, in Africa in 1909 by Werner Janensch. Howevever, in 1991, George Olshevsky placed them in a new genus, Giraffatitan, because they do not share the derived characteristics of Brachiosaurus. Giraffatitan has withers over its shoulder and a rounded crest over its nostrils. The type species of Giraffatitan brancai Janensch, 1914 (formerly B. brancai), is known from five partial skeletons, including at least three skulls and some limb bones, which were recovered in Mtwara, Tanzania, in Africa. It lived from 145 to 150 million years ago, during the Kimmeridgian to Tithonian ages of the Late Jurassic period.

Brachiosaurus is one of the most well-known dinosaurs amongst both paleontologists and the general public. As such, the genus has appeared in many films and television programs, most notably Jurassic Park, Jurassic Park 3, and Walking with Dinosaurs. It also appeared briefly at the end of Walking With Monsters, A main belt asteroid, 1991 GX7, has been named 9954 Brachiosaurus in honor of the genus (Williams 2007; JPL 2007).