Allosaurus was a large (up to 9.7 m long) bipedal (moving on two legs), carnivorous dinosaur that lived during the late Jurassic period, 155 to 145 million years ago. Allosaurus is the most common large predator whose fossils are found in the Morrison Formation, a distinctive sequence of Late Jurassic sedimentary rock that in the western United States and Canada—the most fertile source of dinosaur fossils in North America.

The name Allosaurus comes from the Greek allos/αλλος, meaning "strange" or "different" and saurus/σαυρος, meaning "lizard" or "reptile" (Liddell and Scott 1987). It was named "different lizard" because its vertebrae were different from those of other dinosaurs known at the time of its discovery.

Allosaurus was named by famous palenotologist O. C. Marsh, who found the type species during the famed competition with E. D. Cope. Competition can spur individuals to greater accomplishment. However, the Marsh-Cope competition was so vicious that that there were efforts to destroy each other's reputation. There were allegations of spying, stealing workers, stealing fossils, treaty violations, and bribery. Marsh's camp was even accused of dynamiting a fossil site rather than let it fall into Cope's hands.

Allosaurus shared the landscape with several genera of giant sauropods such as Apatosaurus, Diplodocus, and Camarasaurus as well as other herbivores such as Stegosaurus and Camptosaurus, all of which may have been potential prey. 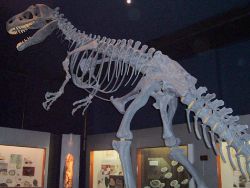 A replica Allosaurus skeleton in Canterbury Museum, Christchurch, New Zealand. The current view is that the animal normally stood in a more horizontal position.

Allosaurus was a typical large theropod, having a massive skull on a short neck, a long tail, and reduced forelimbs. Theropods were a group of bipedal saurischian dinosaurs that first appear during the Late Triassic about 220 million years ago and were the sole large terrestrial carnivores from the Early Jurassic until the end of the Cretaceous, about 65 million years ago. The most distinctive feature of Allosaurus was a pair of blunt horns, just above and in front of the eyes. Although short in comparison to the hind limbs, the forelimbs were massive and bore large, eagle-like claws. The skull showed evidence of being composed of separate modules, which could be moved in relation to one another, allowing large pieces of meat to be swallowed.

The skeleton of Allosaurus, like other theropods, displayed bird-like features, such as a furcula (wishbone) and neck vertebrae hollowed by air sacs.

The animal had an average length of 7-9 meters (~30 feet), with the largest definitive Allosaurus specimen (AMNH 680) measuring 9.7 m (32 ft). Several gigantic specimens have been attributed to Allosaurus, but may in fact belong to other genera. The closely related genus Saurophaganax (OMNH 1708) reached 10.9 m (36 ft) in length, and has sometimes been included in the genus Allosaurus as Allosaurus maximus. Recent studies, however, lend support to the idea that it should remain a separate genus (Chure 2000). Another specimen, assigned to the genus Epanterias (AMNH 5767), may have measured 12.1 m in length. But scientists now think Epanterias may be a species of Allosaurus or Saurophaganax (Mortimer 2003).

Allosaurus is the most common theropod fossil in the vast tract of dinosaur-bearing rock of the American Southwest known as the Morrison Formation. Remains have been recovered in U.S. states of Montana, Wyoming, South Dakota, Colorado, Oklahoma, New Mexico, and Utah. One species of Allosaurus has been described from Portugal, A. europaeus (Mateus et al. 2006).

The first Allosaurus fossil to be described was a "petrified horse hoof" given to Ferdinand Vandiveer Hayden in 1869, by the natives of Middle Park, near Granby, Colorado. It was actually a caudal vertebra (a tail bone), which Joseph Leidy tentatively assigned first to the Poekilopleuron genus and later to a new genus, Antrodemus (Leidy 1870). However, it was Othniel Charles Marsh (1877) who gave the formal name Allosaurus fragilis to the genus and type species in 1877, based on much better material he found, including a partial skeleton, from Garden Park, north of Cañon City, Colorado. The species epithet fragilis is Latin for 'fragile', referring to lightening features in the vertebrae.

A famous fossil bed can be found in the Cleveland Lloyd Dinosaur Quarry in Utah. This fossil bed contains over 10,000 bones, mostly of Allosaurus, intermixed with the remains of other dinosaurs, such as Stegosaurus and Ceratosaurus. It is still a mystery how the remnants of so many animals were preserved in one place. The ratio of fossils of carnivorous animals to fossils of herbivores is normally very small. Findings like these can be explained by pack hunting, although this is difficult to prove. Another possibility is that the Cleveland Lloyd site formed a "predator trap," similar to the La Brea Tar Pits, that caused large numbers of predators to become mired in an inescapable sediment.

The material from the Cleveland Lloyd Dinosaur Quarry specimen is much smaller and more lightly-built than the huge and robust Allosaurus from Brigham Young University's Dry Mesa Quarry. It is unclear how many species of Allosaurus there are.

One of the more significant finds was the 1991 discovery of "Big Al" (MOR 593), a 95% complete, partially articulated, specimen that measured 7.5-8 meters (24-26 feet) in length. Nineteen bones were broken or showed signs of infection, which probably contributed to the animal's death (Hanna 2002). The fossils were excavated near Shell, Wyoming by the Museum of the Rockies and the University of Wyoming Geological Museum. The completeness of this skeleton, not its size, is what gave Big Al its name—the individual itself was below the average size for Allosaurus fragilis, and may have been a subadult or a new, smaller species. The specimen was described by Breithaupt (1996).

This skeleton was initially discovered by a Swiss team, led by Kirby Siber. The same team later excavated a second Allosaurus, "Big Al Two," which is the best preserved skeleton of its kind to date.

Along with its distant relative Tyrannosaurus, Allosaurus has come to represent the quintessential large, carnivorous dinosaur in popular culture. Allosaurus has been featured in such films as The Lost World, One Million Years B.C.E., The Valley of Gwangi, A Sound of Thunder, and others. It was the top predator in Arthur Conan Doyle's novel, The Lost World, appeared in episodes of BBC's series Walking with Dinosaurs, and appeared in the television show When Dinosaurs Roamed America.