Obon (Japanese:お盆) or just Bon (盆) is a Japanese Buddhist custom to honor the spirits of one's ancestors. It has been celebrated in Japan for more than 500 years and traditionally includes a dance, known as Bon Odori. This custom has evolved into a family reunion holiday during which people return to ancestral family places and visit and clean their ancestors' graves, and when the spirits of ancestors are supposed to revisit the household altars.

The festival of Obon lasts for three days; however, its starting date varies within different regions of Japan. In modern Japan, it is held on July 15 in the eastern part (Kantō), on August 15 in the western part (Kansai), and in Okinawa and the Amami Islands it is celebrated like China's Ghost Festival on the 15th day of the 7th lunar month.

For the Japanese, Obon is one of the few events in the year that focuses on the importance of families. They are able to spend time together, recalling their roots and their beloved ancestors. 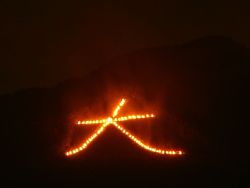 Kyoto's Gozan no Okuribi bonfire lit during the Obon festival 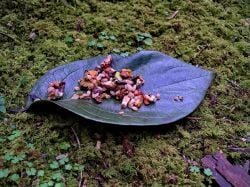 Obon is a shortened form of Ullambana (Japanese: 于蘭盆會 or 盂蘭盆會, urabon'e), a Sanskrit term meaning "hanging upside down," which implies great suffering.[1] The suffering of these spirits is ameliorated through the segaki ritual.

The segaki (Japanese: 施餓鬼) "feeding the hungry ghosts" is a ritual of Japanese Buddhism, traditionally performed to stop the suffering of the gaki or muenbotoke (the dead who have no living relatives), ghosts tormented by insatiable hunger.[2] The segaki began as a way for Moggallana (Maudgalyayna), on instruction of his master, the Buddha Sakyamuni, to free his mother from gaki-do, the realm of the gaki.

Alternatively, Sakyamuni ordered Moggallana to preach the Lotus Sutra or to travel to hell himself, a feat that resulted in the escape of all gaki into the world and necessitating the segaki to force them to return to their realm. Another story says that the student Ananda was told by a gaki that he would become one himself in three days; he thus had to feed strangers to prevent the transformation.

When the lunar calendar was changed to the Gregorian calendar at the beginning of the Meiji era, the localities in Japan responded differently, which resulted in three different times of Obon. Shichigatsu Bon (Bon in July) is based on the solar calendar and is celebrated around the 15th of July in eastern Japan (Kantō region such as Tokyo, Yokohama and the Tōhoku region), coinciding with Chūgen. Hachigatsu Bon (Bon in August), based on the lunar calendar, is celebrated around the 15th of August and is the most commonly celebrated time. Kyū Bon (Old Bon) is celebrated on the 15th day of the seventh month of the lunar calendar, and so differs each year. Kyū Bon is celebrated in areas such as the northern part of the Kantō region, Chūgoku region, Shikoku, and Okinawa Prefecture. These three festival days are not listed as public holidays, but it is customary for people to be given leave to return to their hometown.

The festival is an annual Buddhist event for commemorating one's ancestors. It is believed that each year during the three-day period of Obon, the ancestors' spirits return to this world in order to visit their relatives. The holiday has become a time for family reunions, as people return to their hometowns to visit and clean the graves of their ancestors and share memories of their departed loved ones.[3]

Among the traditional preparations for the ancestors' return are the cleaning of grave sites and preparing a path for them to the house and the provision of straw horses or oxen for the ancestors' transportation. A shoryodana ("spirit altar") is set up in the home in front of the Butsudan (Buddhist family altar) to welcome the ancestors. Offerings of fruit, incense, and flowers may be placed on the altar for the spirits. A priest is usually asked to come and read a sutra (tanagyo).

The three-day celebration traditionally begins with Mukaebi, the lighting of fires to guide spirits home. At the end of the festival, families traditionally sent their ancestors' spirits back to their permanent dwelling place under the guidance of fire in a ritual known as Okuribi (”sending fire”).[4] Lanterns may be used representing fire, hung in front of houses to guide and welcome the spirits of the ancestors. At the end of the Obon period, floating lanterns may be used to guide them back into their world.

During the festival time, the segaki ritual is held at Buddhist temples. Offerings (traditionally rice and water) are presented for hungry ghosts who are wandering in this world as muenbotoke, with no living relatives. There is also a custom to place segaki-dana (rack for gaki) or gaki-dana (shelf for gaki) at people's homes.

As Obon occurs in the heat of the summer, participants traditionally wear yukata, a kind of light cotton kimono. 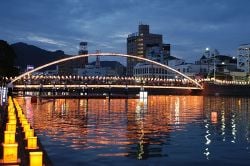 Tōrō nagashi in Sasebo during Obon

Tōrō nagashi (Japanese: 灯籠流し) is a Japanese ceremony in which participants float paper lanterns down a river; tōrō is a word for "lantern," while nagashi means "cruise" or "flow." This activity is traditionally performed on the final evening of the Bon Festival in the belief that it will help to guide the souls of the departed to the spirit world.

Bon Odori originates from the story of Maha Maudgalyayana (Mokuren), a disciple of the Buddha, who used his supernatural powers to look upon his deceased mother only to discover she had fallen into the Realm of Hungry Ghosts and was suffering.[5] Greatly disturbed, he went to the Buddha and asked how he could release his mother from this realm. Buddha instructed him to make offerings to the many Buddhist monks who had just completed their summer retreat on the fifteenth day of the seventh month. Mokuren did this and, thus, saw his mother's release. He also began to see the true nature of her past selflessness and the sacrifices she had made for him during her lifetime. The disciple, happy because of his mother's release from suffering and grateful for her many kindnesses, danced with joy. From this dance of joy comes Bon Odori or "Bon Dance", a time during which ancestors and their sacrifices are remembered and appreciated.

Scene from a bon odori dance festival at the Hanazono Shrine, Shinjuku, Tokyo. Yukata-clad people dance in circles around the yagura as the music plays.

The way in which the dance is performed is also different in each region, though the typical Bon dance involves people lining up in a circle around a high wooden scaffold made especially for the festival called a yagura. The yagura is usually also the bandstand for the musicians and singers of the Obon music. Some dances proceed clockwise, and some dances proceed counter-clockwise around the yagura. Some dances reverse during the dance, though most do not. At times, people face the yagura and move towards and away from it. Still some dances, such as the Kagoshima Ohara dance, and the Tokushima Awa Odori, simply proceed in a straight line through the streets of the town. 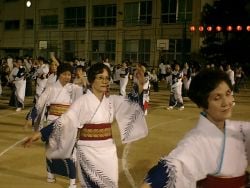 The dance of a region can depict the area's history and specialization. For example, the movements of the dance of the Tankō Bushi (the "coal mining song") of old Miike Mine in Kyushu show the movements of miners, i.e. digging, cart pushing, lantern hanging, etc.; the Sōran Bushi of Hokkaidō mimics the work of fishermen, such as hauling in the nets.

The Bon Festival is celebrated every year in many Japanese communities all over Brazil, as Brazil is home to the largest Japanese population outside Japan. São Paulo is the main city of the Japanese community in Brazil, and also features the major festival in Brazil, with street odori dancing and matsuri dance. It also features Taiko and Shamisen contests. This festival is also a unique experience of a variety of Japanese food and drinks, art and dance.

In Malaysia, Bon Odori Festivals are also celebrated every year in Esplanade, Penang, Shah Alam Stadium in Shah Alam, Selangor, and also Universiti Malaysia Sabah at Kota Kinabalu, Sabah.The festival is less associated with Buddhism and more with Japanese culture. Held mainly to expose locals to a part of Japanese culture, the festival provides the experience of a variety of Japanese food and drinks, art and dance, with the vast number of Japanese companies in Malaysia taking part to promote their products.

Bon Odori festivals are also celebrated in North America, particularly by Japanese-Americans or Japanese-Canadians affiliated with Buddhist temples and organizations. Buddhist Churches of America (BCA) temples in the U.S. typically celebrate Bon Odori with both religious Obon observances and traditional Bon Odori dancing around a yagura. Many temples also concurrently hold a cultural and food bazaar providing a variety of cuisine and art, also to display features of Japanese culture and Japanese-American history.[6] Performances of taiko by both amateur and professional groups have recently become a popular feature of the festival.[7] Bon Odori melodies are also similar to those in Japan; for example, the dance Tankō Bushi from Kyushu is often performed in the U.S. 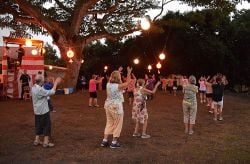 Bon dance in Ke'ei, Island of Hawaii (at Ke'ei Buddhist mission and cemetery)

The "Bon season" is an important part of the present-day culture and life of Hawaii. It was brought there by the plantation workers from Japan, and now the Bon dance events are held among the five major islands (Kauai, Oahu, Molokai, Maui, and Hawaii) on weekend evenings from June to August. They are held usually at Buddhist missions, but sometimes at Shintoist missions or at shopping centers. At some Buddhist missions, the dance is preceded by a simple ritual where the families of the deceased in the past year burn incense for remembrance, but otherwise the event is non-religious. The participants, Japanese descendants and people of all races, dance in a circle around the yagura, the central tower set up for the dance, from which recorded songs are broadcast and, most of the time, the taiko group accompany the songs playing drums. The songs played differ among the regions, and may include both Japanese traditional Bon Odori songs and contemporary popular songs.