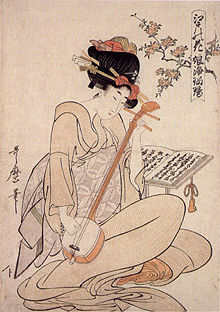 A shamisen or samisen (Japanese: (三 味), (:線, literally "three taste strings"), also called sangen (literally "three strings") is a three-stringed musical instrument played with a plectrum called a bachi. The pronunciation in Japanese is usually "shamisen" (in western Japan, and often in Edo-period sources "samisen") but sometimes "jamisen" (when used as a suffix, e.g. Tsugaru-jamisen).

It is derived from a Chinese stringed instrument with a drum-like body covered with snakeskin, the sanxian, which was introduced to Japan during the sixteenth century. Traditionally it was made with the skin of a dog or cat, but today synthetic materials are being used.

The shamisen can be played solo or with other shamisen, in ensembles with other Japanese instruments, as an accompaniment to singing such as nagauta, or as an accompaniment to drama, notably Kabuki and Bunraku. The shamisen is used in several genres of music, including nagauta, or long song; joruri, meant to accompany the narrator (tayu) of a puppet play; Kabuki theater; and gidayū, named after Takemoto Gidayū (1651-1714), an icon of the Bunraku puppet-theater.

A Japanese man playing a shamisen while another sings.

The shamisen is similar in length to a guitar, but its neck is much slimmer and without frets. Its drum-like rounded rectangular body, known as a dō, is covered with skin in the manner of a banjo, and amplifies the sound of the strings. The skin is usually from a dog or cat, but in the past a special type of paper was used and recently various types of plastics are being tried. On the skin of some of the best shamisen, the position of the cat's nipples can be seen.[1]

The three strings are traditionally made of silk, or, more recently, nylon. The lowest passes over a small hump at the "nut" end so that it buzzes, creating a characteristic sound known as sawari (This is a little like the "buzzing" of a sitar, which is called jawari). The upper part of the dō is almost always protected by a cover known as a dō kake, and players often wear a little band of cloth on their left hand, to facilitate sliding up and down the neck. This band is known as a yubi kake. There may also be a cover on the head of the instrument, known as a tenjin.

The most prized wood used in making a shamisen is koki, a very hard imported kind of rosewood, but rosewood, walnut and mulberry are also used. The sao (neck) is 62.5 cm. long, but of different thicknesses depending on the type of shamisen. The three basic types are "hosozao" ("narrow neck"), which is used for Nagauta; "chuzao" ("middle-sized neck"), which is used for Tokiwazu, Kiyomoto and Shinnai; and "futozao" ("thick necked"), used for Gidayu. The sao is made from one piece of wood, often divided into two or three pieces so that it can be disassembled to be carried compactly. The dō is made from Chinese quince, mulberry or zelkova wood.

In most genres the shamisen is played with a large weighted plectrum called a bachi, which was traditionally made with ivory or tortoise shell but which now is usually wooden, and which is in the shape of a ginkgo leaf. The sound of a shamisen is similar in some respects to that of the American banjo, in that the drum-like skin-covered body, or dō, amplifies the sound of the strings. As in the clawhammer style of American banjo playing, the bachi is often used to strike both string and skin, creating a highly percussive sound.

In kouta ("short song") and occasionally in other genres the shamisen is plucked with the fingers.

The shamisen derives from the sanshin (a close ancestor from the southernmost Japanese prefecture of Okinawa, and one of the primary instruments used in that area), which in turn evolved from the Chinese sanxian, itself deriving originally from Central Asian instruments. Around 1562, the sanxian was introduced by trading ships into two geographical areas of Japan, the cities of Sakai and Osaka and the port of Hakata in Kyushu. In Kyushu, the instrument was played by blind priests. After some thirty years of experiments and improvements, by the beginning of the Azuchi period the basic shape of the modern shamisen was established. The oldest shamisen in existence today, called "Yodo," was made by an artisan in Kyoto on the orders of Toyotomi Hideyoshi. Although in the early days of Kabuki the music ensemble was virtually identical to the Noh ensemble with no shamisen, during the Edo period the shamisen became an indispensable part of Kabuki and of almost all types of musical performance.

The predominant genre of music played by the shamisen players was nagauta, or long song. This was a simple, lyrical style dating from the later seventeenth century, but during the nineteenth century it grew more ornate and complex. Shamisen players also play a genre of music called joruri, after the joruri singing style in puppet plays. Such music was meant to accompany the narrator (tayu) as he sang the story of the play. In the joruri theater, all the action is sung by a narrator, but Kabuki theater alternates narrative with spoken dialogue. When a shamisen player in Kabuki theater plays in both nagauta and joruri styles, this mixture of genres is called kake ai performance.

The most famous and perhaps most demanding of the narrative styles is gidayū, named after Takemoto Gidayū (1651-1714), who was heavily involved in the Bunraku puppet-theater tradition in Osaka. The gidayū shamisen and its plectrum are the largest of the shamisen family, and the singer-narrator is required to speak the roles of the play, as well as to sing all the commentaries on the action. The singer-narrator role is often so vocally taxing that the performers are changed halfway through a scene. There is little notated in the books (maruhon) of the tradition except the words and the names of certain appropriate generic shamisen responses. The shamisen player must know the entire work perfectly in order to respond effectively to the interpretations of the text by the singer-narrator. From the nineteenth century female performers known as onna-jōruri or onna gidayū also carried on this concert tradition.

In the early part of the twentieth century, blind musicians, including Shirakawa Gunpachirō (1909-1962), Takahashi Chikuzan (1910-1998), and sighted musicians such as Kida Rinshōe (1911-1979), evolved a new style of playing, based on traditional folk songs ("Min'yo") but involving much improvisation and flashy fingerwork. This style, now known as Tsugaru-jamisen, after its home region in the north of Honshū, continues to be relatively popular in Japan. The virtuosic Tsugaru-jamisen style is sometimes compared to bluegrass banjo.

One contemporary shamisen player, Takeharu Kunimoto, plays bluegrass music on the shamisen, having spent a year studying bluegrass at East Tennessee State University and performing with a bluegrass band there. Another player using the Tsugaru-jamisen in non-traditional genres is Michihiro Sato, who plays free improvisation on the instrument. The Japanese American jazz pianist Glenn Horiuchi played shamisen in his performances and recordings.