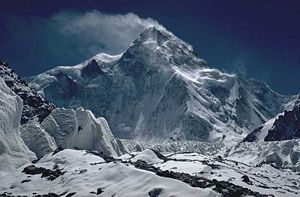 The mythical land of Shambhala is alleged to be located somewhere near the Himalayas or around the Kashmir region.

In Tibetan Buddhism, Shambhala (Tibetan: bde byung, pron. 'De-jung') meaning "Source of happiness," is a mythical kingdom or hidden place somewhere beyond the snowpeaks of the Himalayas. The kingdom is mentioned in various ancient texts, including the Kalachakra Tantra.[1] The Bön[2] scriptures also speak of a closely-related land called 'Olmolungring'.

The concept of Shambhala plays an important role in Tibetan religious teachings, and has particular relevance in Tibetan mythology about the future. The Kalachakra Tantra states that a great army will arise out of the Shambhala kingdom to restore the earth at a future time. This militant vision has been interpreted both metaphorically and literally. For the literalists, Shambhala is a real place and various ideas about its location have been propounded: it is often placed in central Asia, north or west of Tibet. Ancient Zhang Zhung culture, which pre-dates Tibetan Buddhism in western Tibet, identifies Shambhala with the Sutlej Valley in Himachal Pradesh. Mongolians identify Shambala with certain valleys of southern Siberia.

The 14th Dalai Lama has given many Kalachakra initiation ceremonies, which are intrinsically related to the Shambhala concept. 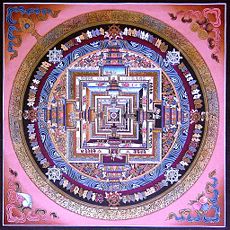 Shambhala is a Sanskrit term meaning "place of peace/tranquility/happiness." Shakyamuni Buddha is said to have taught the Kalachakra tantra on request of King Suchandra of Shambhala; the teachings are also said to be preserved there. Shambhala is believed to be a society where all the inhabitants are enlightened, actually a Buddhist "Pure Land," centered by a capital city called Kalapa. An alternative view associates Shambhala with the real empire of Sriwijaya where Buddhist master Atisha studied under Dharmakirti from whom he received the Kalachakra initiation.

Shambhala is ruled over by a line of Kings known as Kulika, or Kalki Kings (Tib. Rigden), who uphold the integrity of the Kalachakra tantra. Tibetan Buddhism prophesizes that when the world declines into war and greed, and all is lost, the twenty-fifth Kalki king will emerge from Shambhala with a huge army to vanquish "Dark Forces" and usher in a worldwide Golden Age. Using calculations from the Kalachakra Tantra, scholars such as Alex Berzin[4] put this date at 2424 C.E.

One of these Kalki Kings, named Rigdan Tagpa (c. 159 B.C.E.), allegedly ruled over a kingdom of 300,510 followers of the Mlechha (Yavana or "western") religion, some of whom worshiped the sun. He is said to have expelled all the heretics from his dominions but later, after hearing their petitions, allowed them to return. For their benefit, and the benefit of all living beings, he explained the Kalachakra teachings. In 59 B.C.E., he abdicated his throne to his son, Puṇdaŕika, and died soon afterwards, entering the Sambhoga-káya of Buddhahood.[5]

As with many concepts in the Kalachakra Tantra, the idea of Shambhala is said to have an "outer," "inner,' and "alternative" meaning. The outer meaning understands Shambhala to exist as a physical place, although only individuals with the appropriate karma can reach it and experience it as such. The inner and alternative meanings refer to more subtle understandings of what Shambhala represents in terms of one's own body and mind (inner), and the meditation practice (alternative). These two types of symbolic explanations are generally passed on orally from teacher to student.

In modern times, Chögyam Trungpa, founder of Shambhala International, taught that Shambhala kingdom is seen as enlightened society that people of all faiths can aspire to and actually realize. The path to this is provocatively described as the practice of warriorship[6]—meeting fear and transcending aggression, and of "secular sacredness"—joining the wisdom of the past and one's own culture with the present in nowness. 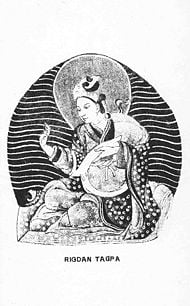 The Western fascination with Shambhala has often been based upon fragmented accounts of the Kalachakra tradition, or outright fabrications. Tibet was largely closed to outsiders until very recently, and so what information was available about the tradition of Shambhala was haphazard at best.[9]

The first information that reached western civilization about Shambhala came from the Portuguese Catholic missionaries João Cabral and Estêvão Cacella who had heard about Shambala (which they transcribed as "Xembala"), and thought it was another name for Cathay or China. In 1627, they headed to Tashilhunpo, the seat of the Panchen Lama and, discovering their mistake, returned to India.[10]

The Hungarian scholar Sàndor Körösi Csoma, writing in 1833, provided the first geographic account of "a fabulous country in the north...situated between 45' and 50' north latitude."

During the nineteenth century, Theosophical Society founder Helena P. Blavatsky alluded to the Shambhala myth, giving it currency for Western occult enthusiasts. Later esoteric writers further emphasized and elaborated on the concept of a hidden land inhabited by a hidden mystic brotherhood whose members labor for the good of humanity.

The mystic Nicholas Roerich[11] and the Soviet agent Yakov Blumkin led two Tibetan expeditions to discover Shambhala, in 1926 and 1928.[12] Apparently inspired by Theosophical lore, Heinrich Himmler and Rudolf Hess sent German expeditions to Tibet in 1930, 1934-35, and 1938-39.[13]

The myths of Shambhala were part of the inspiration for the story of Shangri-La told in the popular novel Lost Horizon published in 1933, possibly influenced by the accounts of Nicholas Roerich published under the title Shambhala three years earlier.[12]

Madame Blavatsky, who claimed to be in contact with a Great White Lodge of Himalayan Adepts, mentions Shambhala in several places without giving it especially great emphasis. (The Mahatmas, we are told, are also active around Shigatse and Luxor.) Blavatsky's Shambhala, like the headquarters of the Great White Lodge, is a physical location on our earth, albeit one which can only be penetrated by a worthy aspirant.

Later esoteric writers like Alice Bailey (the Arcane School) and the Agni Yoga of Nicholas and Helena Roerich do emphasize Shambhala. Bailey transformed it into a kind of extradimensional or spiritual reality on the etheric plane, a gigantic castle in which the governing deity of Earth, Sanat Kumara, is said to dwell. The Roerichs see its existence as both spiritual and physical.

Related "hidden land" speculations surrounding the underground kingdom of Agartha led some early twentieth-century occultists (especially those associated with Nazi or Neo-Nazi occultism) to view Shambhala as a source of negative manipulation by an evil (or amoral) conspiracy. Nevertheless, the predominant theme is one of light and hope, as evidenced by James Redfield's and Chogyam Trungpa Rinpoche's respective books by that name.

The myth has been appropriated in a variety of modern comic books including The Shadow, Prometheus, 2000 C.E., Gargoyles #6, and Warlord.