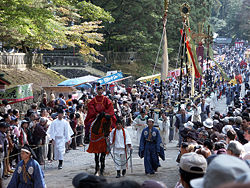 The procession of a thousand warriors is the highlight of the autumn festival at Toshogu in Nikko.

Matsuri is the Japanese word for a festival or holiday. Some festivals have their roots in Chinese festivals but have undergone dramatic changes as they mixed with local customs. Some are so different that they do not even remotely resemble the original festival despite sharing the same name and date. There are also various local festivals (e.g., Tobata Gion) that are mostly unknown outside a given prefecture. There are not specific matsuri days for all of Japan; dates vary from area to area, and even within a specific area, but festival days do tend to cluster around traditional holidays such as Setsubun or Obon (Bon Festival). Almost every locale has at least one matsuri in late summer/early autumn, usually related to the rice harvest. It is commonly said that you will always find a festival somewhere in Japan.

Festivals are often based around one or two main events, with food stalls, entertainment, and carnival games to keep people entertained. Some are based around portable shrines, others hana-bi (fireworks), and still others around contests where many of the participants sport loin cloths. Notable matsuri often feature processions which may include elaborate floats. Karaoke contests, sumo matches, and other forms of entertainment are often organized in conjunction with matsuri. 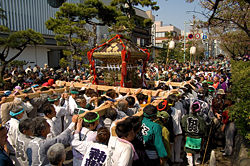 This mikoshi enshrines Tokugawa Ieyasu at the Tōshō-gū in Nikkō. Participants carry the mikoshi during the spring and autumn matsuri of the shrine.

Matsuri is the Japanese word for a festival or holiday. In Japan, festivals are usually sponsored by a local jinja (shrine) or temple, though they can be secular or Christian.

There are not specific matsuri days for all of Japan; dates vary from area to area, and even within a specific area, but festival days do tend to cluster around traditional holidays such as Setsubun or Obon (Bon Festival). Almost every locale has at least one matsuri in late summer/early autumn, usually related to the rice harvest.

Notable matsuri often feature processions which may include elaborate floats. Preparation for these processions is usually organized at the level of neighborhoods, or machi. Prior to these, the local kami may be ritually installed in mikoshi(portable shrines) and paraded through the streets.

In the vicinity of a matsuri, one can usually find booths selling souvenirs and food such as takoyaki(octopus balls), and games, such as snatching goldfish. Karaoke contests, sumo matches, and other forms of entertainment are often organized in conjunction with matsuri.

Favorite elements of the most popular matsuri, such as the Nada Kenka Matsuri of Himeji or the Neputa Matsuri of Hirosaki, are often broadcast on television for the entire nation to enjoy. 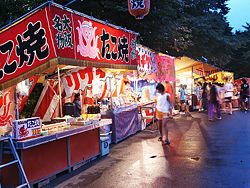 Stalls selling food or toys are a familiar sight at festivals throughout Japan. 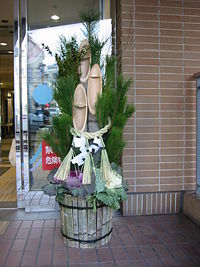 Other Names: Oshogatsu (O is an honorific prefix)

Information: Unlike most people of East Asian descent, Japanese people generally do not celebrate Chinese New Year (it having been supplanted by the Western New Year's Day in the late nineteenth century); although Chinese residents in Japan still do. In Yokohama Chinatown, Japan's biggest Chinatown, tourists from all over Japan come to enjoy the festival. And similarly the Nagasaki Lantern Festival is based in Nagasaki's China town. New Year observances are the most important and elaborate of Japan's annual events. Before the New Year, homes are cleaned, debts are paid off, and oseichi (food in lacquered trays for the New Year) is prepared or bought. Oseichi foods are traditional foods which are chosen for their lucky colors, shapes, or lucky-sounding names in hopes of obtaining good luck in various areas of life during the New Year. Homes are decorated and the holidays are celebrated by family gatherings, visits to temples or shrines, and formal calls on relatives and friends. The first day of the year (ganjitsu) is usually spent with members of the family.

People also visit Buddhist temples and Shinto shrines. Traditionally three shrines or temples are visited. This is called sansha-mairi. In the Imperial Palace at dawn on the 1st of January, the emperor performs the rite of shihohai (worship of the four quarters), in which he does reverence in the direction of various shrines and imperial tombs and offers prayers for the well-being of the nation. On January 2 the public is allowed to enter the inner palace grounds; the only other day this is possible is the emperor's birthday (December 23). On the 2nd and 3rd days, acquaintances visit one another to extend greetings (nenshi) and sip otoso (a spiced rice wine). Some games played at New Year's are karuta (a card game) and hanetsuki (similar to badminton). Exchanging New Year's greeting cards (similar to Christmas Cards in Western countries) is another important Japanese custom.

A later New Year's celebration, Koshogatsu, literally means "Small New Year" and starts with the first full moon of the year (around January 15). The main events of Koshogatsu are rites and practices praying for a bountiful harvest. 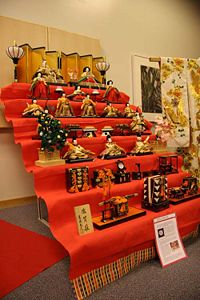 Information: This holiday is also known as the Peach Festival because peach blossoms herald the coming of spring and are the symbol of courage and feminine beauty. Young girls put on their kimonos and visit the homes of their friends. Tiered platforms for hina ningyo (hina dolls are a set of dolls representing the emperor, empress, attendants, and musicians in ancient court dress) are set up in the home, and the family celebrates with a special meal of hishimochi (diamond-shaped rice cakes) and shirozake (rice malt with sake).

Information: Various flower festivals are held at Shinto shrines during the month of April. Excursions and picnics for enjoying flowers, particularly cherry blossoms, are also common. In some places flower viewing parties are held on traditionally fixed dates. This is one of the most popular events during spring. The subject of flower viewing has long held an important place in literature, dance and the fine arts. Ikebana (flower arrangement) is also a popular part of Japanese culture and is still practiced by many people today. 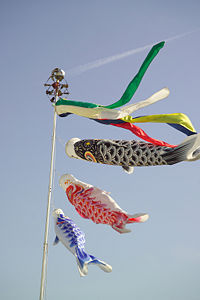 Information: May is the month of the Iris Festival. The tall-stemmed Japanese iris is a symbolic flower. Its long, narrow leaves resemble the sharp blades of a sword, and for many centuries it has been the custom to place iris leaves in a boy's bath to give him a martial spirit. Originally May 5th was a festival for boys corresponding to the Doll Festival, for girls, but in 1948 it was renamed Children's Day and made a national holiday. However, this might be a misnomer; the symbols of courage and strength mainly honor boys. It is customary on this day for families with male children to fly koinobori (carp streamers, a symbol of success) outside the house, display warrior dolls (musha ningyo) or helmets inside, and eat chimaki (rice cakes wrapped in cogan grass or bamboo leaves) and kashiwamochi (rice cakes filled with bean paste and wrapped in oak leaves). 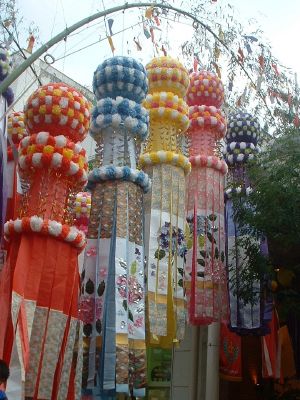 Other Names: The Star Festival

Information: It originated from a Chinese folk legend concerning two stars - the Weaver Star (Vega) and the Cowherd Star (Altair) - who were said to be lovers who could meet only once a year on the 7th night of the 7th month provided it didn't rain and flood the Milky Way. It was named Tanabata after a weaving maiden from a Japanese legend who was believed to make clothes for the gods. People often write wishes and romantic aspirations on long, narrow strips of colored paper and hang them on bamboo branches along with other small ornaments.

Information: A Buddhist observance honoring the spirits of ancestors. Usually a "spirit altar" (shoryodana) is set up in the home in front of the Butsudan (Buddhist family altar) to welcome the ancestors' souls. A priest is usually asked to come and read a sutra (tanagyo). Among the traditional preparations for the ancestors' return are the cleaning of grave sites and preparing a path for them to the house and the provision of straw horses or oxen for the ancestors' transportation. The welcoming fire (mukaebi) built on July 13 and the send-off fire (okuribi) built on the 16th are intended to light the path.

Information: The customary practice to mark the end of the (O)Bon Festival. Small paper lanterns containing lighted candles are placed to float on rivers or the sea. They are believed to light the way for the ancestral spirits as they depart. Usually a message is written on the outside of the paper lantern.

Other Names: Choyo no Sekku

Information: Now the least celebrated of the five sekku or seasonal celebrations. The chrysanthemum is a flower of special importance to the Japanese; the sixteen-petaled chrysanthemum is the imperial crest. Every year in September, the Chrysanthemum Festival takes place. Hundreds of species of this flower developed by the Japanese are on display. An even more interesting part of this festival is the Chrysanthemum Doll Fete. Lifelike clay figures are dressed in robes made of fresh chrysanthemums and are arranged as parts of legendary and historical scenes.

Information: Five-year-old boys and seven- or three-year-old girls are taken to the local shrine to pray for their safe and healthy future. This festival started because of the belief that children of certain ages were especially prone to bad luck and hence in need of divine protection. Children are usually dressed in traditional clothing for the occasion and after visiting the shrine, many people buy chitose-ame ("thousand-year candy") sold at the shrine.

Preparation for the New Year and Year-end Fair

Information: Preparations for seeing in the New Year were originally undertaken to greet the toshigami, or deity of the incoming year. These began on the 13th of December, when the house was given a thorough cleaning; the date is usually nearer the end of the month now. The house is then decorated in the traditional fashion: A sacred rope of straw (shimenawa) with dangling white paper strips (shide) is hung over the front door to prevent evil spirits from entering and to show the presence of the toshigami. It is also customary to place kadomatsu, an arrangement of tree sprigs, beside the entrance way. A special altar, known as toshidana ("year shelf"), is piled high with kagamimochi (flat, round rice cakes), sake (rice wine), persimmons, and other foods in honor of the toshigami. A fair is traditionally held in late December at shrines, temples or in local neighborhoods, in preparation for the New Year holidays. Decorations and various goods are sold at the fair. Originally these year-end fairs provided opportunities for farmers, fisher-folk and mountain dwellers to exchange goods and buy clothes and other necessities for the coming year.

Information: People do the general house cleaning (Osouji) to welcome the coming year and to rid of impure influences. Many people visit Buddhist temples to hear the temple bells rung 108 times at midnight (joya no kane). This is to announce the passing of the old year and the coming of the new. The 108 rings originate in the Buddhist belief that human beings are plagued by 108 earthly desires or passions (bonno). With each ring one desire is dispelled. It is also a custom to eat toshikoshi soba ("year-crossing noodles") in the hope that one's family fortunes will extend like the long noodles.