Her iconic bathing suit photo made her the number-one pin-up girl of the World War II era. It was later included in the LIFE magazine project "100 Photos that Changed the World." Her famous pin-up pose during World War II adorned barracks all around the world. With that pin-up and as the star of lavish musicals, Grable became the highest-paid star in Hollywood.

She appeared in her first film at age 14, but it took her a decade to reach stardom and then she became one of the Top 10 box office draws for another decade. During her lifetime, she became one of the most prolific singing actresses of her time, starring in over one hundred films, including Pin Up Girl and How To Marry A Millionaire.

With the nation immersed in war, wholesomeness and innocence was at a premium. Grable was a balanced mixture of sexiness and innocence who even the women back home could look up to. Grable's pin-up image and her escapist musical films accommodated the viewer's need to dream and escape.

She was born Elizabeth Ruth Grable in St. Louis, Missouri to John Conn Grable (1883-1954) and Lillian Rose Hofmann (1889-1964). She was the youngest of three children; she had a sister named Marjorie and a brother, named John Carl (who passed away as a child).[1]

Elizabeth, who later became Betty, was enrolled in Clark's Dancing School at the age of three. With her mother's guidance, Betty studied ballet and tap dancing. She was introduced to acting in 1929 when her mother moved with her to Hollywood.

Grable finally obtained a role as a 'Goldwyn Girl' in Whoopee! (1930), starring Eddie Cantor. In addition to appearing in dance routines directed by Busby Berkeley, making his Hollywood debut, Betty was also the featured soloist in a few lines of the film's opening song Cowboy Number.

It was two years before Betty's name appeared on screen when she received seventh billing in the film Child of Manhattan. Previous to this, she was doing bit parts appearing with Lucille Ball and Paulette Goddard, also Goldwyn Girls, in other Cantor films titled Palmy Days and The Kid From Spain.[3]

Grable then worked in small roles at different studios for the rest of the decade, including the Academy Award-winning The Gay Divorcee (1934), starring Fred Astaire and Ginger Rogers. RKO Pictures was impressed by her performance in The Gay Divorcee so they signed her to a five-year contract and gave her a part in the Wheeler and Woolsey comedy murder mystery film The Nitwits. This film gave her third billing. This was followed by the film Old Man Rhythm that starred Charles "Buddy" Rogers in a campus caper.

In the summer of 1935 Betty met and fell in love with former child star Jackie Coogan. The publicity of this union made Betty's name a household word. She and Coogan were given a contract for a cross-country touring show called Hollywood Secrets. In one of the sketches on the show the couple appeared as movie stars on an authentic Hollywood set and would show the audience how it was all done.[3]

While under contract at Paramount Pictures, she was dropped and took a job touring with Eddie Rochester Anderson's vaudeville show. When the tour ended she went to work for Jack Haley in a show he was producing in San Francisco.

Grable earned good reviews while with Haley and as a result 20th Century Fox head Darryl F. Zanuck took notice and signed her to a contract, though he didn't offer her any work. Zanuck simply wanted to keep her around as backup in case something happened to his reigning star, Alice Faye. Grable continued to work for Haley then co-starred in the Broadway production of Du Barry Was a Lady, with Ethel Merman. 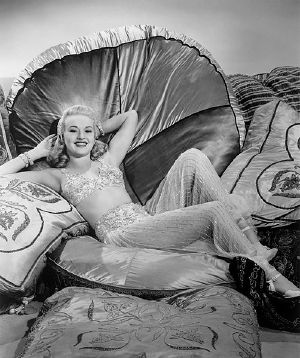 Grable was a hit on Broadway, but Hollywood finally called in 1940 when Faye became ill and Zanuck needed a replacement for the musical Down Argentine Way. Though the film was a vehicle for Carmen Miranda, Grable was a hit with audiences, leading Zanuck to star her in several more musicals as well as a few dramatic roles. She was cast in Tin Pan Alley (1940), co-starring Faye. As the Lily sisters, both Grable and Faye received favorable reviews for their performances. 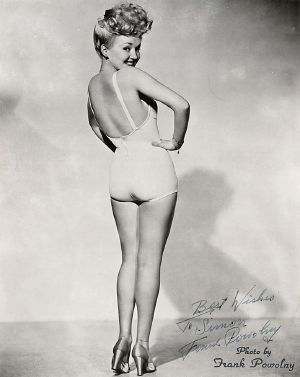 It was during her reign as box office queen (in 1943) that Grable posed for her famous pinup photo, which (along with her movies) soon became escapist fare among GIs fighting in World War II. The image was taken by studio photographer Frank Powolny, who died in 1986.[4] The famous shot featured Grable in a tight, one-piece bathing suit. One particular pose showed Grable's back to the camera as she playfully smiled looking over her right shoulder, with the pose chosen because she was several months pregnant with her first child.[5]

Despite solid competition from Rita Hayworth, Dorothy Lamour, Veronica Lake, Carole Landis and Lana Turner, Grable was the top pinup girl for American soldiers. She was very popular at home as well becoming the No. 1 female box office attraction in 1942, 1943, 1944 and remained in the Top 10 for the next decade. By the end of the 1940s Grable was the highest-paid female star in Hollywood.[2]

Although she never toured outside the United States for the U.S.O., she actively participated in War efforts, appearing at Camps across the country and at Bond Rallies where she auctioned off her nylons for thousands of dollars. Volunteering at the Hollywood Canteen, a club for servicemen staffed entirely by film stars and studio workers, she 'Jitterbugged' the night away with hundreds of soldiers, sailors and marines."[2]

When her studio circulated the famous bathing suit picture they became an instant hit. LIFE magazine had coined the term "pinup" in the July 7, 1941, special issue on National Defense and anointed "Dottie" Lamour as the nation's first official pinup girl. Grable's 1943 image would far surpass Lamour's popularity when the Fox studio reportedly issued about five million copies of the pose.[2]

Did you know?
Betty Grable was known as the "Girl with the Million Dollar Legs" thank to an insurance policy taken out by 20th Century-Fox on her legs

Known as the “Girl With the Million Dollar Legs,” thanks to rumors about an insurance policy filed with Lloyd's of London. The story was that Fox was concerned that damage to Grable's legs could spell the end of her career, so they negotiated the then highly unusual insurance policy on her shapely legs.[6]

Zanuck released the film Pin Up Girl on May 10, 1944, to capitalize on the famous photo, and used the photo to publicize many of the wartime films of the Fox studio. Her yearly salary of $320,000 by 1947 made her the highest paid salaried woman in America. However, her contract with Fox ended in 1953 as the studio began to feature a new "blond bombshell" by the name of Marilyn Monroe.

Her postwar musicals included: That Lady in Ermine (1948) with Douglas Fairbanks Jr., When My Baby Smiles at Me (1948) again with Dailey, Wabash Avenue (1950) (a remake of Grable's own Coney Island) with Victor Mature, My Blue Heaven (1950), and Meet Me After the Show (1951). Studio chief Darryl F. Zanuck lavished his star with expensive Technicolor films, but also kept her busy—Grable made nearly 25 musicals and comedies in 13 years. Her last big hit for Fox was How to Marry a Millionaire (1953) with Lauren Bacall and Marilyn Monroe. Grable next starred in Three For The Show (1955) with Jack Lemmon and this film was one of her last musicals.

Transition to TV and Broadway

Grable's later career was marked by feuds with studio heads. At one point, in the middle of a fight with Zanuck, she tore up her contract and stormed out of his office. Gradually leaving movies entirely, she made the transition to television and starred in Las Vegas.

Betty appeared on many TV shows during the late Fifties. She appeared on The Shower of Stars, The Jack Benny Show and the Lucy-Desi Comedy Hour.

She made many nightclub appearances, opening up in New York's Latin Quarter and many shows in Vegas. Her and Dan Dailey opened at the Dunes Hotel in December of 1962 in a production of Guys and Dolls. They played to packed houses and the show ran until the following summer the next year.[3]

In 1967, she took over the lead in the touring company of Hello, Dolly!. She starred in a 1969 musical called Belle Starr in London, but it was closed early after bad reviews.

Grable's last role was Billie Dawn in Born Yesterday, and the last stage she performed on was the Alhambra Dinner Theatre in Jacksonville, Florida in February, 1973.[3]

In 1937, Grable married another famous former child-actor, Jackie Coogan. He was under considerable stress from a lawsuit against his parents over his earnings, however, and the couple divorced in 1939.

In 1943, she married trumpeter and big band leader Harry James. The couple had two daughters, Victoria and Jessica. They endured a tumultuous 22-year marriage that was plagued by alcoholism and infidelity. The couple divorced in 1965. Grable entered into a relationship with a dancer, Bob Remick, several years her junior. Though they did not marry, their romance lasted until the end of Grable's life.

Grable died of lung cancer at age 56 in Santa Monica, California. Her funeral was held July 5, 1973, 30 years to the day after her marriage to Harry James—who, in turn, died on what would have been his and Grable's fortieth anniversary, July 5, 1983. She is interred in Inglewood Park Cemetery, Inglewood, California.

Betty Grable was truly a potent force in 1940s Hollywood. For a decade she ranked among the film industry's top stars. During the 1940s there was no more popular female movie star in the world. Grable's Technicolor musicals, with their high and consistent revenues, powered Fox from years in the red in the late 1930s to a position just behind Paramount Pictures in the film industry's race for profits. More than any film star of the 1940s, Grable was able to move beyond her films to become a universally popular icon.[7]

Neil Sedaka composed and recorded his original song Betty Grable for his 1973 Laughter in the Rain album.

Retrieved from https://www.newworldencyclopedia.org/p/index.php?title=Betty_Grable&oldid=1073658
Categories:
Hidden category:
This page was last edited on 23 July 2022, at 14:44.
Content is available under Creative Commons Attribution/Share-Alike License; additional terms may apply. See Terms of Use for details.