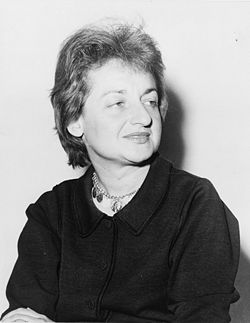 Betty Friedan (February 4, 1921 – February 4, 2006) was an American feminist, activist, and writer. Her 1963 book, The Feminine Mystique, is considered by many to have given important impetus to the women's rights movement. It was a bestseller in 1964, the year of the passage of the Civil Rights Act, when it sold over three million copies. Her book, geared to the suburban housewife of post–World War II America, and based on a survey she took of her Smith College colleagues, told of women's disaffection with societal roles prescribed for them. In an era when a woman could choose to stay at home or have a career—two paths that were normally deemed mutually exclusive—Friedan's book opened the way for women to rethink their places in the family, the community, and the world at large.

Friedan was born Bettye Naomi Goldstein on February 4, 1921, in Peoria, Illinois. Her father, Harry Goldstein, owned a jewelry shop and her mother, Miriam Horowitz Goldstein, quit her job as a women's page editor for a newspaper when she became pregnant with Betty. When Betty's mother took over running the shop after her husband fell ill, Betty noted that she seemed happier and more gratified than when she was an at-home mother. Although the family was well-off, her mother's frustration and unhappiness at being a housewife, coupled with the fact that the family was Jewish and did not fit into the cultural milieu of Peoria, led to Betty's feelings of isolation and anger as a teenager.

Betty channeled her dissatisfaction with the status quo into seeking social change. She became active in Marxist and Jewish radical circles. Eventually, she became disillusioned with ideologies, like communism, that did not fit her experience. “But in the America where I lived, abstractions of that world revolution of the masses didn't seem all that real, didn't really work, didn't actually change real life...,” she said in her autobiography. “But later this struggle to make sense of it all made me wary of any tinge of authoritarianism in the women's movement and the danger of perversion of feminism by its own extremists.”[1]

After high school, she left Peoria and attended Smith College, where she edited a campus newspaper and graduated summa cum laude in 1942. After graduation, she spent a year at the University of California, Berkeley doing graduate work in psychology. She declined a Ph.D. fellowship for further study, leaving to work as a journalist for leftist and union publications. Turning down the fellowship, partly due to lack of confidence about her own path in life as a woman, was a decision that she later regretted. However, while Friedan was doing research for her groundbreaking book The Feminine Mystique, she utilized her background in psychology, along with her knowledge of statistics and surveys, to bring a keen power of observation to her writing.

Career and The Feminine Mystique

In 1952, Friedan was fired from the union newspaper UE News when she was pregnant with her second child. This experience helped to shape her views about the importance of securing rights for women in terms of employment opportunities.

For her fifteenth college reunion in 1957, Friedan conducted a survey of Smith College graduates, focusing on their education and their subsequent experiences and satisfaction—or dissatisfaction—with their current lives. Her article on the survey, which lamented the lost potential of her female classmates and present-day female college students, was submitted to women's magazines in 1958. It was rejected by all editors to whom it was submitted, even after Friedan rewrote portions at the request of some of the editors.

Friedan then decided to rework and expand the article into a book. The book, which took Friedan five years to write, was published in 1963, and was titled The Feminine Mystique. The book depicts the roles of women in industrial societies, and in particular the full-time homemaker role, which Friedan saw as unfulfilling for some women. The book became an overnight bestseller, and was said to have significantly spurred second-wave feminism and the modern-day women's movement.

The book provoked reaction throughout the country from both men and women. Although controversial, many women wrote to Friedan suggesting that her book helped them to make positive choices in their lives, which had, heretofore, been experiencing stagnation. As for her rationale for writing it, the book's preface reads:

My answers may disturb the experts and women alike for they imply social change. But there would be no sense in my writing this book at all if I did not believe that women can affect society as well as be affected by it; that, in the end, a woman, as a man, has the power to choose, and to make her own heaven or hell.[2]

NOW and the Women's Movement

Friedan co-founded the U.S. National Organization for Women (NOW) with 27 other women and men and was its first president, serving from 1966 to 1970. She wrote its statement of purpose with Pauli Murray, the first African American female Episcopal priest. The first issue that NOW tackled was helping to enforce the ending of sex discrimination, ruled illegal by Title VII of the Civil Rights Act. The group petitioned the Equal Opportunity Employment Commission (EEOC) to rescind its guidelines allowing help-wanted ads in newspapers to be segregated into male and female categories. They also supported the cause of airline stewardesses, who in 1967 had a class action suit against the airlines, who were forcing them from their jobs at the age of 32 or when they married.[3]

Friedan helped found NARAL (originally National Association for the Repeal of Abortion Laws) in 1969, together with Bernard Nathanson and Larry Lader. NARAL's purpose was to work to decriminalize abortion laws; an issue barely touched on in the late 1960s. Friedan's first address to their convention addressed the rights of women to have unlimited, safe, legal medical access to all forms of birth control and abortion, if necessary. Although Friedan had her own personal feelings about abortion, she supported a woman's right to choose. Later, she said, "…in recent years I've gotten a little uneasy about the movement's narrow focus on abortion as if it were the single, all important issue for women when it's not.”[4]

In 1966, Friedan traveled to India to cover the first female prime minister, Indira Gandhi. It was from her meeting with Gandhi that Friedan realized how effective women could be in leadership positions without having to assume a male political style. Friedan had a cape, made by the designer Rudi Gernreich, sent to Gandhi as a gift, who invited her back to India. Indira was assassinated, though, in 1984, before Friedan was able to make a return visit.

Although they had opposite views, Freidan met with Pope Paul VI in 1973. Many Catholic nuns, were in fact involved with the women's movement in America and were supporters, not of abortion, but of the Equal Rights Amendment. Despite their differences, Friedan was touched by the Pope's concern and sincerity involving women in the Church.

She married Carl Friedan, a theatre producer, in 1947. Betty Friedan continued to work after marriage as a freelance journalist. They had three children, Emily, Daniel, and Jonathan. One of their sons, Daniel Friedan, is a noted theoretical physicist.

Friedan's husband supported his wife in the writing of her book The Feminine Mystique. However, the fame and controversy that soon followed, coupled with her activism, put a strain on the marriage. They divorced in May 1969 amidst allegations of abuse on both sides.

Freidan's temperament has been commented on by many in the women's movement. Her husband was quoted as saying, "She changed the course of history almost single-handedly. It took a driven, superaggressive, egocentric, almost lunatic dynamo to rock the world the way she did. Unfortunately, she was that same person at home, where that kind of conduct doesn't work. She simply never understood this."[5]

Later in life, despite their divorce, the Friedans became friends and visited their children and grandchildren together. Carl Friedan died in 2005. Betty Friedan died at her home in Washington, D.C. on February 4, 2006, of congestive heart failure on her 85th birthday.