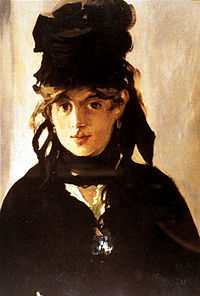 Berthe Morisot with a Bouquet of Violets, a portrait by Édouard Manet, dated 1872.

Berthe Morisot (January 14, 1841 – March 2, 1895) was a painter and a printmaker, and the first woman member of the circle of painters in Paris who became known as the Impressionists. She and American-born Mary Cassatt were the most famous female impressionist painters, and they are considered by many to be the most important women painters of the later nineteenth century.

Morisot received training in painting from a young age and she enjoyed success in her early exhibits at the esteemed Salon de Paris. She joined the "rejected" Impressionists in the first of their own exhibitions, among them Cézanne, Degas, Monet, Pissarro, Renoir, and Sisley. Official critics had rejected their works as engaging in "mere impressionism," a title she and her circle came to embrace as describing their desire to convey the visual impressions of light playing on objects and color. She worked in close collaboration with Édouard Manet, who painted a well known portrait of her (at right), influenced her style, and in turn was influenced by her to adopt the "high-keyed palate" and the plein air style of painting out or doors. Many of her works focused on family life, and she is considered a master in the subtle use color and light. 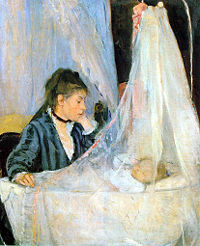 Morisot was the granddaughter of the Rococo painter, Jean-Honoré Fragonard. He had been one of the most prolific Rococo painters of the ancien régime, whose handling of color and expressive, confident brushwork influenced later painters. Berthe was born in Bourges, Cher, France into a successful bourgeois family. Both she and her sister Edma Morisot chose to become painters, receiving instruction in drawing and painting. Once Berthe settled on pursuing art, her family did not impede her career.

After dedicating herself to painting at an early age, she exhibited a seriousness that many women at the time were not able to achieve. By age 20, she met and befriended artist Camille Corot, under whose tutelage she worked from 1862 to 1868.

The older artist instructed Berthe and her sister in painting and introduced them to other artists and teachers. Under Corot's influence, Morisot took up the plein air method of working out of doors. (Paint was now packaged in small tubes allowing the artist to paint a complete work out of doors.) As art students, Berthe and Edma worked closely together until Edma married, had children, and no longer had time to paint so intensely as Berthe. Letters between them show a loving and cordial relationship, dealing with Edma's withdrawal from painting and underscored by Berthe's regret at the physical distance between them. Edma wholeheartedly supported Berthe's continued work and the families of the two sisters always remained close.

Morisot's first appearance at the influential Salon de Paris came at the age of 23 in 1864, with the acceptance of two landscape paintings. She continued to exhibit regularly in the Salon, to generally favorable reviews, until 1873, the year before the first Impressionist exhibition there. However, official criticism and rejection of many impressionists caused Morisot to withdraw from the Salon in 1874, in protest of the "accepted" community of art critics and in support of her fellow artists. In fact, the term "impressionist" was originally used as a derisive term, but the artists of this school embraced it. (Denvir, 2000) Today the Impressionists are both popular and well respected, many of their paintings being sold for millions of dollars today. 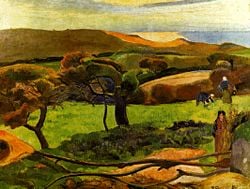 Meanwhile, in 1868, she became acquainted with Édouard Manet. He took a special interest in Morisot, as is evident from his warm portrayal of her in several paintings, including a striking portrait study of Morisot in a black veil, while in mourning for her father's death. (See image at top of this article.) Correspondence between them shows affection. He once gave her an easel as a Christmas present. He also interfered in one of her Salon submissions when he was engaged to transport it. Manet mistook one of Morisot's self-criticisms as an invitation to add his corrections, which he did, much to Morisot's dismay.

Although traditionally Manet has been characterized as the master and Morisot as the follower, there is evidence that their relationship was a reciprocating one. (Turner, 2000) Morisot had developed her own distinctive artistic style, and records show Manet's approval and appreciation of certain stylistic and compositional decisions that Morisot originated. He incorporated some of these characteristics into his own work. She encouraged him to adopt the impressionistic "high-keyed palate" and to abandon the use of black and grays. Her own compositions used bright-hued colors, free of the grays and blacks of contemporary painters.

It also was Morisot who convinced Manet to attempt plein air painting, which she had been practicing since having been introduced to it by Corot. She also drew Manet into the circle of painters who soon became known as the Impressionists. In 1874, Morisot married Manet's brother, Eugene, and they had one daughter, Julie.

As a doctrinaire Impressionist as well as a member of the haute bourgeoisie, Morisot painted what she experienced on a daily basis. Her paintings reflect the nineteenth century cultural restrictions of her class and gender. She avoided urban and street scenes as well as the nude figure. Like her fellow female Impressionist, Mary Cassatt, she focused on domestic life and portraits in which she could use family and personal friends as models. Paintings like The Cradle, 1872, in which she depicted current trends for nursery furniture, reflecting her sensitivity to fashion and advertising, both of which would have been apparent to her female audience.

Morisot's work was delicate and had a subtle use of color, never using black or grays in shadow but often exhibiting an emerald glow with specks and dabs of reflected light, producing an immediate sense of color caught in the flicker of light upon the surface of the subject matter but not focusing on the subject matter itself. 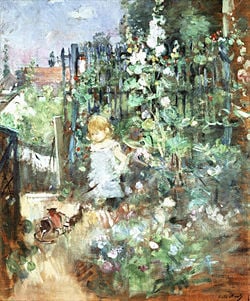 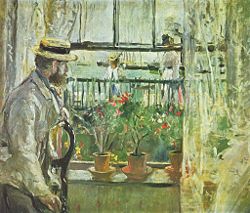 Her works include not only landscapes, portraits, garden settings, and boating scenes, but also subjects portraying the comfort and intimacy of family and domestic life, as did her those of her colleagues, Pierre-Auguste Renoir and Mary Cassatt. Though she was not successful commercially during her life time, she outsold Claude Monet, Renoir, and Alfred Sisley.

Berthe Morisot died aged 54, on March 2, 1895, in Paris and was interred in the Cimetière de Passy.