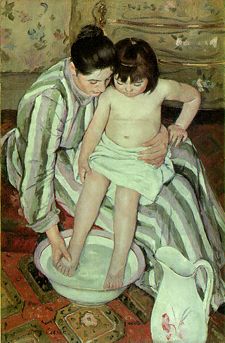 Mary Stevenson Cassatt (May 22, 1844 – June 14, 1926) was an American painter often associated with the Impressionists, and known especially for depicting natural scenes of mothers with their children. Her paintings express a deep tenderness and her own love for children. Sadly, she never had children of her own. Mary herself chose that path, however, and perhaps through her paintings, made a much-needed statement to the women of the world—for that time and since.

Born in Allegheny City, Pennsylvania, which is now part of Pittsburgh, she was the daughter of a well-to-do businessman. Cassatt grew up in a close family, which also valued education. Her sister, Lydia, was to become her close companion and her brother Andrew would be a patron of the arts. Her parents believed travel was a way to learn, and before she was 10 years old, she visited many of the capitals of Europe, including London, Paris, and Berlin.

At seventeen, despite her family's objections to her becoming a professional artist, she began studying painting at the Pennsylvania Academy of the Fine Arts in Philadelphia, Pennsylvania (1861-1865). But the patronizing instructors and fellow male students, and the slow pace of her courses tired her. She decided to study the old masters on her own, so in 1866, she moved to Paris.

Returning to the United States at the outset of the Franco-Prussian War, she lived with her family, but was unable to sell a single painting. Art supplies and models were also difficult to find in her small town. Her father continued to resist her vocation, telling her, “I would almost rather see you dead!” and paid only for her basic needs. In winter 1871, she sailed to Italy, after she was commissioned by the archbishop of Pittsburgh to paint copies of originals in Italy. “Oh how wild I am to get to work…to see a fine picture again.”

In Italy, she studied the paintings of Corregio, whose portrayal of babies—with their soft roundness—was magnificent. Cassatt incorporated this, as well as his handling of light and shade and the effects of light playing on color, into her own work. In Spain, she studied the works of the great masters Velasquez and Murillo. She wrote that, “I think one learns how to paint here…I really never in all my life experienced such delight in looking at pictures.” By 1873, after copying and, thus, learning from some of the greatest art works in Europe, her style had matured. She returned to Paris to see her second painting accepted by the Paris Salon.

The jury had first accepted her painting, The Mandolin Player, for the Salon in 1868, and then in 1873, her Torero and Young Girl. Still, her natural style was not accepted by the Salon critics, who claimed that her colors were too bright and that her portraits too accurate to be flattering to the subject. Cassatt was suspicious of the Salon, because she knew that all she had to do was paint the way they wanted her to, and her art would be accepted. None of that was her, though, and she longed to be free of them—as did some of her contemporaries.

Upon seeing pastels by Edgar Degas in an art dealer's window, she knew she was not alone in her rebellion against the Salon. "I used to go and flatten my nose against that window and absorb all I could of his art," she wrote to a friend. "It changed my life. I saw art then as I wanted to see it." For his part, after Degas saw Mary’s Portrait of Madame Cortier in 1874, he announced, “There is someone who feels as I do.” 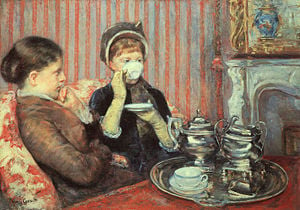 She met Edgar Degas in 1877, and he invited her to exhibit with the Impressionists: She responded by declaring, "I accepted with joy. I hated conventional art. I began to live. At last I could work in complete independence, without bothering about the eventual judgment of a jury."

As an active member of its circle, Cassatt hung her work in Impressionist shows from 1879 until 1886. She remained friends with Degas and also fellow Impressionist Berthe Morisot.

Shortly after her triumphs with the Impressionists, Cassatt focused on caring for her mother and sister, who fell ill after moving to Paris. “With the failing health of her sister and chief companion, Lydia, and her ultimate death in 1882, Cassatt seemed to become increasingly aware of her own vulnerability and solitary life.”

Cassatt resumed painting by the mid-1880s. Writing after Cassatt’s mother and father had both passed, a friend said that Cassatt was “very lonesome…and says she feels…that perhaps she would have been better off to have married [rather than] being left alone in the world.” Cassatt’s self-doubts continued to trouble her—even though her work was ever more beautiful and powerful.

Her style evolved, and she moved away from impressionism to a simpler, straightforward approach. By 1886, she no longer identified herself with any art movement and experimented with a variety of techniques. In 1888, Cassatt began to work seriously on her now famous mother-child theme. Nearly one third of her paintings depict a mother and child portrayed in intimate relationship and domestic settings. In 1893, at Cassatt’s first solo exhibition, critics said, ”No painter has seen with so much feeling, nor has anyone, with such convincing art, translated into canvas the poem of the family.”

In Family Group Reading (1901), “by placing the child's hands in those of the mother's, Cassatt is able to show the responsibility and control a mother has and the infinite ways in which a mother can guide a child to success through education. It is through her paintings of mothers as honorable teachers, that Cassatt is able to publicize the credited role of a mother in bringing up well-educated and cultured Parisian children. … This direct implication of mothers as educators is also seen in Nurse Reading to a Little Girl (1901). Here the mother figure as well holds the book of knowledge for the child. In this way, Cassatt's paintings redefine motherhood, assigning it the revered duty of enhancing the minds of society and giving it feminist power.”

Cassatt advocated the meaningful role of mothers as mentors, which extended beyond patriarchal chores. “Women were further encouraged back into the home through Cassatt’s depictions of an appealing view of intimate love between a mother and child and lending the title of mother new meaning.” For those women who wanted complete freedom from their roles as mothers, however, Cassatt’s topics were difficult to accept.

Women at that time were seeking equal rights. Cassatt carried the message of the women’s suffrage movement somewhat further. “Cassatt's movement, to bring women back to the home and honor the role mothers play in society, was particularly represented through Mother About to Wash Her Sleepy Child" (1880). Cassatt's painting “…expressed very clearly her own view of the highest achievement a woman could attain,” which was the love of a child. Through the subject's intimately connected eyes, Cassatt illustrates an extraordinary loving connection, one elite to that of a mother and child.” There is no doubt that, although her statement has at times been misunderstood by feminists, Cassatt enhanced and uplifted the role of women—in a way that no law could.

The cross she bore was that, even though she held the family in such awe and appreciation, Mary Cassatt was never to have a husband or child. Her contribution to society at that time and since has been as a herald and messenger, to inform and glorify the most important relationship there is—that of mother and child.

In 1891, Cassatt exhibited a series of highly original colored prints, including Woman Bathing and The Coiffure, inspired by the Japanese masters shown in Paris the year before. She had seen an exhibition of Japanese prints with Degas that very much changed the way that both of them looked at things.

The 1890s were Cassatt's busiest and most creative time. She also became a role model and connection for young American artists who sought her advice. As the new century arrived, Cassatt served as an adviser to several major art collectors and stipulated that they eventually donate their purchases to American art museums. Among them was Louisine Havemeyer, who bought a large collection of French Impressionist paintings and later donated them to the Metropolitan Museum of Art. Cassatt also convinced her brother, head of the Pennsylvania Railroad, to invest in her fellow French artists. Although she was instrumental in advising the American collectors, however, recognition of Cassatt’s art in the United States came more slowly.

Cassatt was not one who advertised herself or work extensively, and disdained being considered pushy or overly ambitious. From early on, she had decided not to accept any awards or participate in any juried shows. Nor did she travel to her native country to introduce her art. From what little they did know about her art, Americans seemed to prefer her earlier works to her Impressionist paintings.

Thus, in 1892, it was with excitement that she began work on a mural for the 1893 World’s Fair in Chicago. Her hopes were to make a name for herself in her own country. Reflecting Cassatt’s lifelong concern, Modern Woman, addressed the breakdown of the nineteenth century French family, the necessary passing of knowledge from one generation to another, and the important role of a mother as a teacher and mentor. Unfortunately, little is known about the mural, since the building that housed it was torn down after the fair. Published words of American critics, however, were that her work was “erratic,” “more or less ridiculous,” or “unduly conspicuous.” Her later solo exhibition in New York drew similar commentary, although in Paris, the same shows garnered rave reviews.

Finally diagnosed with diabetes, rheumatism, neuralgia, and cataracts in 1911, she did not slow down until after 1914, when she was forced to stop painting because of near blindness.

Nonetheless, she took up the cause of women's suffrage, and in 1915, she showed 18 works in an exhibition supporting the movement. By 1917, when strides had been made in women’s rights, Cassatt could only reflect that, “In looking back over my life, how elated I would have been if in my youth I had been told I would have the place in the world of Art I have acquired, and now at the end of life how little it seems, what difference does it all make?”

Cassatt’s mother said of her daughter, “a woman who is not married is lucky if she has a decided love for work of any kind, and the more absorbing it is the better." Cassatt was absorbed in her art throughout her life. Perhaps that mother-daughter love, which penetrated her life and work so much, won over the value she found as a painter.

Mary Cassatt died on June 14, 1926, at Château de Beaufresne, near Paris, and was buried in the family vault at Mesnil-Théribus, France. Within two years of Cassatt's death, the United States exhibited four memorial shows of her work. Finally, her art was honored in her native country.

Before 2005, her paintings sold for as much as US$2.8 million. In recognition of her contributions to the arts, France awarded her the Légion d'honneur in 1904.