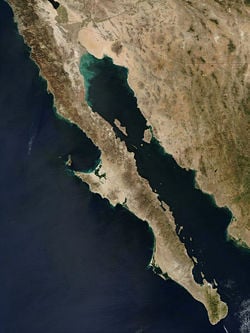 The Baja California peninsula, (also Lower California peninsula) is a North American peninsula, politically a part of the nation of Mexico. Extending approximately 760 miles (1,220 km) in length and 25 to 150 miles (40 to 240 km) in width, it separates the Pacific Ocean from the Gulf of California (or "Sea of Cortés"). Surrounded by numerous small islands, its 2,038 miles (3,280 km) of coastline enclose an area of approximately 55,366 square miles (143,396 square km).

Known for its sheltered coves, secluded beaches and rugged mountains and deserts, the peninsula is also home to some of the best preserved rock art in the world. The approximately 250 painted sites became a UNESCO World Heritage Site in 1993.

Sometimes termed the "Lower California" peninsula, it serves to separate the Gulf of California (also known as the Sea of Cortez) on its west from the Pacific Ocean on its south and east. It is bounded to the north by the United States. Politically, it is divided into the Mexican states of Baja California and Baja California Sur.

A series of mountain ranges runs the length of the peninsula, which are known as the Peninsular Ranges, and extend into Southern California.

The Baja California peninsula was once a part of the North American Plate, the tectonic plate of which mainland Mexico remains a part. About five million years ago, the East Pacific Rise began cutting into the margin of the North American Plate, initiating the separation of the peninsula from it. Thereafter, the East Pacific Rise continued to propagate northward, up through what is now the Gulf of California. The propagating tip of the spreading center is now located somewhere in the Salton Sea basin. The Baja California peninsula is now part of the Pacific Plate and is moving with it away from the East Pacific Rise in a north northwestward direction. It is an ongoing example of a type of crustal block known as a terrane.

The Rock Paintings of Sierra de San Francisco is a UNESCO World Heritage Site on the Baja Peninsula. This prehistoric rock art, found in the Sierra de San francisco region, are representations of what was once the life of the Indigenous Cochimi or Guachimi in the peninsula. Little is known about this group, apart from the fact that they came from further north.

These paintings, which vary in origin from 1100 B.C.E. to 1300 C.E., are found on the roofs of rock shelters and on the walls of Sierra de San Francisco. They were first discovered by the Jesuit Francisco Javier in the eighteenth century. The property is made up of approximately 250 sites which are located in the municipality of Mulege within the El Vizcaino Biosphere Reserve. The area's isolated location has protected them from vandalism.

The content of these paintings includes religious content as well as weapons and animal species such as rabbit, puma, lynx, deer, wild goat/sheep, whale, turtle, tuna, sardine, octopus, eagle and pelican; there are also abstract elements of various forms.

The area has the most important concentration of prehispanic art in the Baja California Peninsula. It is of exceptional quality at both national and international scale, for its high quality, its extent, the variety and originality of human and animal representations, its remarkable colors, and its excellent state of preservation. The rock paintings of Sierra de San Francisco were nominated in 1989 and became a World Heritage Site in 1993.

There is evidence of humans inhabiting the Baja California peninsula as far back as 9,000 to 10,000 years ago. The area would have been more humid at that time, with huge Pleistocene mammals roaming the area. At the time of European discovery of the peninsula, some of the most primitive tribal cultures in the Americas were residing there.[1]

Following Hernán Cortés conquest of Mexico, the lure of an earthly paradise as well as the search for the fabled Strait of Anián, helped motivate him to send several expeditions to the west coast of New Spain in the 1530s and early 1540s. The first expedition reached the Gulf of California and Baja California, and proved the "Island of California" was in fact a peninsula. Nevertheless, the idea of the island persisted for well over a century and was included in many maps. The Spaniards gave the name "California" to the peninsula and to the lands north, including both Baja California and Alta California, the region that became parts of the present-day U.S. states of California, Nevada, and others.

As Spain laid claim to the peninsula, 60,000 to 70,000 Indians lived on the land. Residing in generally small villages, they subsisted on a fishing and hunter-gatherer lifestyle. Unable to successfully colonize the peninsula, Jesuit missionaries were sent to establish permanent settlements at Loreto in 1697. The missionaries were able to gather the individual clans, clothe and catechize them. However, the native peoples were nearly wiped out due to a series of epidemics introduced by the Spaniards.

In 1768 Franciscans replaced the Jesuits, but lasted only five years before the Dominican order replaced them. By the time the Dominicans arrived, the native population in the south had been nearly decimated. They concentrated on founding new missions in the north and reaching those tribes which had little contact with the Europeans until that time.

Baja California gained its independence from Spain in 1822. Following this, the missions were gradually abandoned. Mestizo farmers and cattlemen began to fill up the peninsula. After the Mexican War of 1846–48, the Treaty of Guadalupe Hidalgo gave California proper to the United States and assigned Lower California, meaning the Baja peninsula, to Mexico.[1] 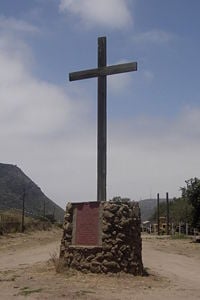 Marker erected in honor of the Upper-Lower California partition. The marker reads, in part, "This was the starting point for the setting of the first international division line between Old or Lower California (Dominicans) and New or Upper California (Franciscans) five leagues to the north (Valley of the Medanos) being established by: Priest Francisco Palou on 19 August 1773 (Mojonera of Palou) in compliance with the instructions put forth on the April 7 1772 Concordato."

In May 1990 the Rosarito Historical Society erected a marker at the point in which the dividing committee began the measurements for the province's partition. The marker is behind the Misión San Miguel Arcángel de la Frontera, near Ensenada, Baja California.

The peninsula is divided into two different states:

However, rapid development in the areas of industry and tourism, overfishing and overexploitation of water resources, and understaffing and underfunding of protected areas threaten the state of its natural environment.

There is a need for more long-term planning for environmental management, increased enforcement of the law, the creation of reserves and management plans, implementation of specific management programs, and increased protection and monitoring of endangered species.[5]

Retrieved from https://www.newworldencyclopedia.org/p/index.php?title=Baja_California&oldid=1094775
Categories:
This page was last edited on 11 January 2023, at 04:14.
Content is available under Creative Commons Attribution/Share-Alike License; additional terms may apply. See Terms of Use for details.