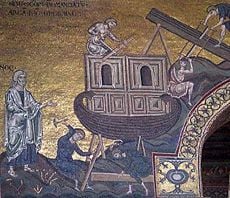 The stories of Atrahasis' boat and Noah's ark closely resemble one another.

Atra-Hasis, also spelled Atrahasis, is an eighteenth century B.C.E. Akkadian epic, named after its human hero. It contains both a creation myth, explaining how the gods created humankind and an early flood account which was later incorporated into the Epic of Gilgamesh and is also thought to have influenced the biblical flood story.

The myth begins by explaining how the lesser gods tired of their labors on the canals and farms of Mesopotamia and instigated a rebellion. Enlil, the god of the sky and earth, wanted to punish these gods, but Enki, the god of the waters, argued that humans should be created to do the work instead. The womb goddess, Nintu, was appointed to create humankind by mixing clay with the blood of a junior god who was killed as a sacrifice. However, human overpopulation soon became a problem. Enlil sent various disasters to diminish humankind, but Enki persistently foiled his plans. Finally, Enlil determined to send a flood to kill all humans, and Enki warned the faithful Atrahasis of the plan. Atrahasis then built a boat and saved his family and animals. Enlil was furious at Enki for ruining his plan, but they agreed to devise a new way to control human population. Nintu arranged that one out of every three children born would die, and certain priestesses would be celibate.

King Atrahasis is listed in the Sumerian king list as one of the monarchs who lived before the deluge, but his historicity cannot otherwise be confirmed. 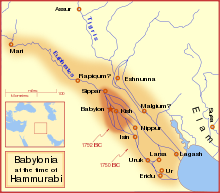 The location of Babylonia made it vulnerable to floods from the Euphrates and Tigris rivers.

The oldest known copy of the epic of Atrahasis can be dated by its scribal identification to the reign of Hammurabi's great-grandson, Ammi-Saduqa (1646–1626 B.C.E.), but also various Old Babylonian fragments exist. The story continued to be copied into the first millennium B.C.E. The Atrahasis story also exists in a later fragmentary Assyrian version, the first one having been discovered in the library of Ashurbanipal.

In 1965, W.G. Lambert and A.R. Millard published additional texts belonging to the epic written around 1650 B.C.E. which constitute our most complete surviving recension of the tale. These texts greatly increased knowledge of the epic and served as the foundation for the first English translation of the full Atrahasis epic, by Lambert and Millard in 1969. A further fragment has been recovered in archaeological work at the Mesopotamian city of Ugarit.

The best surviving text of the Atrahasis epic is written on three tablets in Akkadian, the language of ancient Babylon.

The creation of humans

Tablet I contains a creation myth about the Sumerian gods Anu, Enlil, and Enki, the gods of heaven, earth/sky, and water, "when gods were in the ways of men" according to its opening line. Following the casting of lots, heaven is ruled by Anu, earth by Enlil, and the freshwater sea by Enki. Enlil assigns junior gods to do farm labor and maintain the rivers and canals, but after 40 years they rebel and refuse to do hard labor. Enlil demands to know who is responsible for the rebellion, that they may be duly punished:

Enki, always the wise counselor, advises against punishing the rebels, and suggests that humans be created to do the work. The mother goddess Nintu is assigned the task of creating humans.

The goddess creates humankind by shaping clay figurines mixed with the flesh and blood of a slain minor deity, Weila or Aw-ilu, who was sacrificed for this purpose. After ten months, a specially made womb breaks open and humans are born. Tablet I continues with legends about overpopulation and plagues, and Atrahasis is also introduced.

Tablet II begins with more overpopulation of humans, who have become bothersome to the gods. Tiring of the incessant noise, Enlil sends, plague, famine, and drought at formulaic intervals of 1200 years to reduce the population.

The country was as noisy as a bellowing bull
The God grew restless at their racket,
Enlil had to listen to their noise.
He addressed the great gods,
"The noise of mankind has become too much,
I am losing sleep over their racket.
Give the order that surrupu-disease shall break out."

Enki, who often takes the side of mankind in Babylonian mythology, intervenes to help humans stave off these disasters. In response to the prayers of Atrahasis ("The Extremely Wise"), he provides the key to survival: prayers not to one's personal deity, but to the specific god responsible for the calamity—Namtar for plague, Hadad for rain, etc. When Enlil institutes widespread starvation, Enki, who controls the waters, foils his plan by letting loose large quantities of fish to feed the people. Tablet II is badly damaged, but ends with Enlil's decision to destroy mankind altogether with a flood, and Enki bound by an oath to keep the plan secret.

Tablet III contains the flood story, which was also adapted in the Epic of Gilgamesh, in which Gilgamesh learns the story of the flood from its survivor (known in that version as Utnapishtim). The clever Enki devises a way to warn Atrahasis without technically breaking his oath. Speaking "to" the reed wall of Atrahasis' house (suggestive of an oracle) Enki advises Atrahasis to dismantle his house and build a boat to escape the flood.

Wall, listen constantly to me!
Reed hut, make sure you attend to all my words!
Dismantle the house, build a boat… 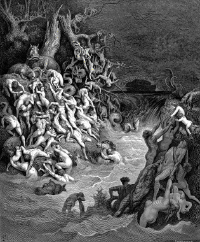 In the Great Flood described in the epic of Atrahasis, humans "clog the river like dragonflies."

The boat is to have a roof, upper and lower decks, and to be sealed with bitumen. Atrahasis does as suggested and later boards the boat with his family and animals. After he seals the door, the storm and flood begin. Even the gods are afraid of the mighty deluge that ensues. They watch aghast as:

Like a wild ass screaming the winds howled
The darkness was total, there was no sun….
As for Nintu the Great Mistress,
Her lips became encrusted with rime.
The great gods, the Annunaki,
Stayed parched and famished.
The goddess watched and wept…

The mother goddess mourns for her children who "clog the river like dragonflies." She also longs for beer, which humans can no longer offer. The other gods, too, go hungry and thirsty, but, "like sheep, they could only fill their windpipes with bleating."

After seven days, the flood ends and Atrahasis descends from the boat to offer sacrifices to the gods, who hungrily hover over his offering "like flies." Enlil, however, is outraged to discover that humans have survived. Enki denies breaking his oath and argues: "I made sure life was preserved."

Enki and Enlil agree that other means must be devised for controlling the human population. From now on, all people must eventually die. Moreover, Enki instructs Nintu to arrange it that a third of human pregnancies will not succeed, as a demon will "snatch the baby from its mother's lap." They also institute various classes of priestesses who will be "taboo" and thus keep down the population.

The Epic of Atrahasis provides additional information on the flood and its hero that is omitted in the Epic of Gilgamesh and other versions of the Ancient Near East flood story. According to Atrahasis, the flood hero hosted a banquet just before the storm and flood began, but was deeply troubled at the impending disaster: "He invited his people… to a banquet… He sent his family on board. They ate and they drank. But he (Atrahasis) was in and out. He could not sit, could not crouch, for his heart was broken and he was vomiting gall." 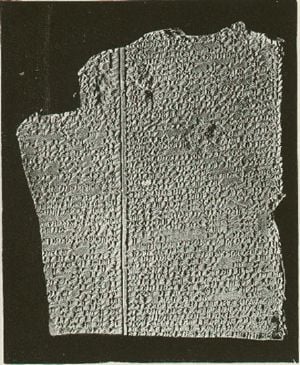 The flood tablet of the Epic of Gilgamesh.

The flood story in the Epic of Gilgamesh, Chapter XI was paraphrased or copied verbatim from the Epic of Atrahasis. However, editorial changes were also made, some of which had long-term consequences. The sentence quoted above—"Like dragonflies they have filled the river"—was changed in Gilgamesh XI line 123 to: "Like the spawn of fishes, they fill the sea." Thus, a river flood was transformed into an oceanic deluge.

Other editorial changes were made to the Atrahasis text in Gilgamesh that removed the suggestion that the gods had physical needs. For example, "The Anunnaki (the senior gods) were sitting in thirst and hunger" was changed in Gilgamesh to "The gods feared the deluge." Other sentences in Atrahasis were omitted in Gilgamesh, for example, "(the goddess) was surfeited with grief and thirsted for beer" and "from hunger they (the gods) were suffering cramp."

In a like manner, biblical scholars have noted that the Genesis version of the flood story changes the theological milieu from one of polytheism to monotheism, in which the Hebrew God takes on the role of both Enlil, by initiating the flood, and Enki, by taking compassion on mankind and warning the righteous Noah to build the ark. Also, in Genesis, God is not angered by mankind's noise, but by its sin; and since death has already been instituted in the story of Adam and Eve, God merely shortens the human lifespan to 120 years.

Retrieved from https://www.newworldencyclopedia.org/p/index.php?title=Atra-Hasis&oldid=1060957
Categories:
Hidden category:
This page was last edited on 30 November 2021, at 19:31.
Content is available under Creative Commons Attribution/Share-Alike License; additional terms may apply. See Terms of Use for details.