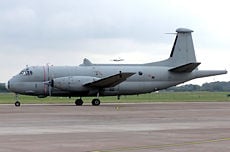 An Atlantique plane belonging to the Italian Navy. Identical to the downed Pakistan Navy plane.

The Atlantique Incident represented an event in which the Indian Air Force shot down a Pakistan Navy plane, Breguet Atlantique, carrying sixteen people on board, citing violation of airspace. The episode took place in the Rann of Kutch on August 10, 1999, just a month after the Kargil War, creating a tense atmosphere between India and Pakistan. The downing represented the Pakistan Navy's only loss of an airplane to hostile fire in its history.

The Atlantique Incident, taking place one month after the end of the Kargil War, heightened tensions between the two nations. Each nation had tested nuclear weapons in 1998, meaning even relatively minor incidents could devolve into a nuclear exchange. The Indian Air Force had reason to suspect the Pakistan Navy of intentional violation, in light of the apparent deceptive attempt to seize Kargil. Yet, in a less tense time, the Indian government would have to question why a navy plane, most likely unarmed, would put the lives of sixteen personnel in harms way without protection. In any case, the Atlantique Incident ratcheted up the tension between the two countries another notch. Fortunately, recently, relations between India and Pakistan have been normalizing.

The French-built naval plane Breguet Atlantique (Breguet Br.1150 Atlantique) plane, flight Atlantic-91,[1], one of the Pakistan Navy's front line aircraft, has been used primarily for patrol and reconnaissance (though capable of being fitted with air-to-surface missiles and anti-submarine weapons). Atlantic-91 left Mehran (Sindh province) Naval Base in Pakistan at 9:15 a.m. (PST). An Indian Air Force ground radar picked up the flight path of the plane approaching the International Border.[2] The Indian Air Force soon scrambled two IAF Mig-21 interceptor aircraft of No.45 Squadron, from the Indian airbase at Naliya in the Kutch region.[3] After a series of maneuvers—and a conflicting version of events from both sides—the two jets received clearance to shoot down the Pakistani plane. At 11:17 a.m. IST (10:47 a.m. PST), nearly two hours after takeoff from Pakistan, the Indian Air Force jets intercepted the Atlantique, Squadron Leader P.K. Bundela and fired infrared homing air-to-air missile at it, hitting the engine on the port side of the plane.[4] That resulted in the aircraft losing control and spiraling towards a crash at approximately 11:00 a.m. PST, killing all sixteen on board the Atlantic-91, including five officers of the Pakistan Navy.

The incident constituted the Pakistan Navy's only loss of an aircraft to hostile fire in its history, and the biggest combat-related casualty for the navy since the Indo-Pakistani War of 1971. 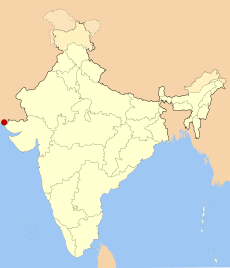 The region in Kutch, (marked in red) where the incident took place.

The event immediately sparked claims and counter-claims by both nations. Pakistan claimed that the plane had been unarmed, that debris had been found on Pakistan's side of the border,[5] providing evidence that the aircraft had remained in Pakistan airspace. According to the official Pakistan version of events, the plane merely flew on a "routine training mission inside Pakistan air space."[6] The Pakistani Prime Minister stated during the funeral service of the airmen that the shooting constituted "a barbaric act."[7]

The Indian Air Force claimed that the aircraft failed to respond to international protocol and that the plane acted in a "hostile" manner, adding that the debris of a downed aircraft fell over a wide area. Indian sources stated that the BBC initially quoted the Pakistani Information Minister, Mushahid Hussein, as saying that the aircraft flew on a "surveillance" mission.[8] India also argued that the plane violated a bilateral agreement signed between India and Pakistan in 1991. The treaty states that no military aircraft would fly anywhere near 10 km from the border.[9] Indian experts also questioned why a training mission flew so close to international borders, since all air forces clearly demarcate training areas for flight, located well away from the borders. According to them, the Pakistanis made an untenable claim, since the Atlantique primarily operates over the sea; carrying out a training flight over land deep inside foreign territory indicated a surveillance mission. India displayed part of the wreckage of the Pakistani naval aircraft at New Delhi airport the next day. Pakistan alleged that Indian helicopters had removed the wreckage from its side of the border. 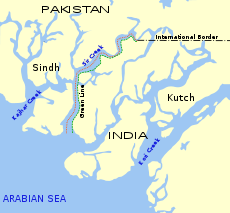 Enlarged map of the region showing Sir Creek and Kori Creek area where the plane had been shot down and wreckage found.

While Pakistan said that the plane had been unarmed and the debris fell within Pakistani territory, India maintained that warnings had been given to the Atlantique and that its flight trajectory meant it could have fallen on either side of the border. According to the Indian version of events, the MiGs tried to escort it to a nearby Indian base, when the Pakistani aircraft turned abruptly and tried to make a dash for the border, drawing Indian fire. India claimed that the debris had been found in a radius of 2 km on either side of the border and that the intrusion took place 10 km inside the Kori Creek, in Indian territory. Pakistan requested that the matter be taken up in the UN. Indian officials pointed to previous violations in the area, that in the previous year a Pakistani unmanned surveillance aircraft had intruded 150 km inside the Indian border, coming close to the Bhuj air base before the IAF spotted it and brought it down with several missiles.[10] They further added that Pakistani military aircraft had violated Indian airspace at least fifty times since January 1999, showing videotapes of Pakistani Atlantiques "buzzing," or flying provocatively near the Indian Navy's warships in the Indian Ocean.[11] Some Indian analysts stated that an Atlantique had been nearly destroyed in 1983, on a similar encounter, noting other close encounters as well as violations by Pakistani naval planes.[12]

Independent defense experts stated that the Atlantique probably conducted a "probe" on India's air defense system, mainly the radar equipment in the border area; they advised that Pakistan had never intended aggressive military action. Foreign diplomats who visited the crash site noted that the plane "may have strayed into restricted space," and that Islamabad had been unable to explain why the plane flew so close to the border; they added that India's reaction to the incident had been unjustified.[13] Many countries, the G8, the permanent members of the UN Security Council, as well as the western media questioned the wisdom behind Pakistan's decision to fly military aircraft so close to the Indian border.[14] They advised that Pakistan should exercise more caution, especially after the Kargil episode.

On the day following the attack, the Pakistan Army attacked an IAF helicopter carrying journalists to the site of the attack with a surface-to-air missile. Pakistani officials asserted that Pakistan fired upon Indian jets when they had intruded into Pakistani airspace near the Atlantique wreckage site, along the border between the Indian state of Gujarat and Pakistan's Sindh Province. International and Indian television journalists traveling in the chopper said the aircraft shook severely and a flash appeared in the air, suggesting a missile had been fired at it.[15] The IAF thus aborted their mission to display Atlantique wreckage on Indian soil.[16]

The rising tensions in the area, coupled the dispute over the Sir Creek territory, led to both the countries' militaries near the Rann of Kutch and nearby going on high alert. Pakistan sent a company of soldiers, equipped with both laser guided and infrared homing shoulder-fired surface-to-air missiles, to the site near the border. Coming barely weeks after the Kargil Conflict, where both nuclear armed countries fought high altitude warfare, the international community viewed the incident with growing concern. The U.S. State Department termed the subcontinent as being in a state of "continued high-stakes tension." 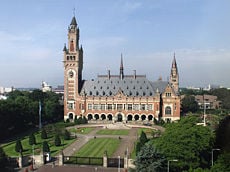 The International Court of Justice dismissed Pakistan's case on the grounds that the court lacked jurisdiction.

On September 21, 1999, Pakistan lodged a compensation claim at the International Court of Justice (ICJ) in The Hague, accusing India of shooting down an unarmed aircraft. Pakistan sought about $60 million in reparations from India and compensation for the victims' families (The cost of the aircraft lost in the incident is put at >$35 million.) India's attorney general, Soli Sorabjee, argued that the court lacked jurisdiction,[17] citing an exemption it filed in 1974, to exclude disputes between India and other Commonwealth States, and disputes covered by multi-lateral treaties.[18] In the buildup to the case, India also contended that Pakistan had violated the 1991 bilateral agreement between Pakistan and India on air violations, which states "Combat aircraft (to include fighter, bomber, reconnaissance, jet military trainer, and armed helicopter aircraft) will not fly within 10 km of each other’s airspace including Air Defense Identification Zone."[19]

On June 21, 2000, the 15-judge Bench headed by Gilbert Guillaume of France ruled—with a 14–2 verdict—upholding India's submission that the court had no jurisdiction in the matter.[20] The court dropped Pakistan's claims, without recourse to appeal, the outcome seen as a decision highly favorable to India.[21] The ruling constituted a financial setback to the Pakistan government which had spent close to 25 million Pakistani rupees (approx. $400,000) preparing for the case, much higher than what India spent.[22]

In India, the incident made the two pilots of the Mig-21s into instant heroes. On October 8, 2000, Squadron Leader P.K. Bundela received the prestigious Vayusena medal. Wing Commander V.S. Sharma (the fighter controller who tracked the Atlantique, guided the pilot, and ordered him to attack the plane) also received the medal, as did Squadron Leader Pankaj Vishnoi, the helicopter pilot who recovered a part of the Atlantique's debris from the marshy border regions of the Rann.[23]

The downing of the Pakistani aircraft came at a particularly bad juncture for the Pakistani Prime Minister, Nawaz Sharif, already under attack from right-wing conservatives for ordering a retreat of its troops in the Kargil War. Two months later, an army coup led by Pervez Musharraf deposed him.

Retrieved from https://www.newworldencyclopedia.org/p/index.php?title=Atlantique_Incident&oldid=1094626
Categories:
This page was last edited on 9 January 2023, at 06:15.
Content is available under Creative Commons Attribution/Share-Alike License; additional terms may apply. See Terms of Use for details.