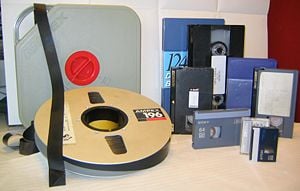 An assortment of video tapes

Videotape is a means of recording images and sound onto magnetic tape as opposed to movie film.

In most cases, a helical scan video head rotates against the moving tape to record data in two dimensions, because video signals have a very high bandwidth and static heads would require extremely high tape speeds. Video tapes are used in both video tape recorders (VTRs or, more common, video cassette recorders—VCRs) and video cameras. Tape is a linear method of storing information, and since nearly all video recordings made nowadays are digital, it is expected to gradually lose importance as non-linear/random access methods of storing digital video data are becoming more common.

While technological advancement is natural and desirable, it poses a number of challenges for cultural heritage institutions who hold massive videotape collections. Historically and culturally important events and performances are preserved at archives, libraries, and other cultural heritage institutions. However, the preservation of data requires costly data migration for the reason that formats change, video tapes have a short (ten to twenty years) life span, and certain video players go out of production and are unrepairable. Many institutions have started to digitize videotaped records, however, more efforts are needed to process the enormous amount of records preserved on videotape in various formats.

The electronics division of entertainer Bing Crosby's production company, Bing Crosby Enterprises (BCE), gave the world's first demonstration of a videotape recording in Los Angeles on November 11, 1951. Developed by John T. Mullin and Wayne R. Johnson since 1950, the device gave what were described as "blurred and indistinct" images, using a modified Ampex 200 tape recorder and standard quarter-inch (0.6 cm) audio tape moving at 360 inches (9.1 m) per second.[1] A year later, an improved version, using one-inch (2.6 cm) magnetic tape, was shown to the press, who reportedly expressed amazement at the quality of the images, although they had a "persistent grainy quality that looked like a worn motion picture." Overall, the picture quality was still considered inferior to the best kinescope recordings on film.[2] Bing Crosby Enterprises hoped to have a commercial version available in 1954, but none came forth.[3] BCE demonstrated a color model in February 1955, using a longitudinal recording on half-inch (1.3 cm) tape, essentially similar to what RCA had demonstrated in 1953 (see below). CBS, RCA's competitor, was about to order BCE machines when Ampex introduced the superior Quadruplex system (see below).[4]

RCA demonstrated the magnetic tape recording of both black-and-white and color programs at its Princeton laboratories on December 1, 1953.[5] The high-speed longitudinal tape system, called Simplex, in development since 1951, could record and play back only a few minutes of a program. The color system used half-inch (1.3 cm) tape to record five tracks—one each for red, blue, green, synchronization, and audio. The black-and-white system used quarter-inch (1.9 cm) tape with two tracks, one for picture and one for sound. Both systems ran at 360 inches (9.1 m) per second.[6] RCA-owned NBC first used it on the The Jonathan Winters Show on October 23, 1956, when a pre-recorded song sequence by Dorothy Collins in color was included in the otherwise live program.[7] 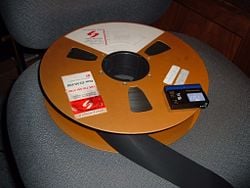 The first practical professional videotape machines were the Quadruplex machines introduced by Ampex in the United States on April 14, 1956. Quad employed a transverse (scanning the tape across its width) four-head system on a two-inch (5.08 cm) tape, and linear heads for the soundtrack. CBS first used the Ampex Mark IV at its Television City studios in Hollywood on November 30, 1956 to play a delayed broadcast of Douglas Edwards and the News from New York to the Pacific Time Zone.[8]

Although Quad became the industry standard for 20 years, it had drawbacks such as an inability to freeze pictures, no picture search, and in early machines, a tape could only reliably be played back using the same set of hand-made tape heads, which wore out very quickly. Despite these problems, Quad could produce excellent images.

Unfortunately, very few early videotapes still exist. The high cost of early videotapes meant that most broadcasters erased and reused them, and (in the United States) regarded videotape as simply a better and more cost-effective means of time-delaying broadcasts than the previous kinescope technology, which recorded television pictures onto photographic film. It was the four time zones of the continental United States which had made the system very desirable in the first place. However, some early broadcast videotapes have survived, including The Edsel Show, broadcast live in 1957, and 1958's An Evening With Fred Astaire, the oldest color videotape of an entertainment program known to exist (the oldest color videotape is the May 1958 dedication of the WRC-TV studios in Washington, DC). In 1976, NBC's 50th anniversary special included an excerpt from a 1957 color special starring Donald O'Connor; despite some obvious technical problems, the color tape was remarkably good. Subsequent videotape systems have used helical scan, where the video heads record diagonal tracks (of complete fields) on to the tape.

The next format to gain widespread usage was the 1" (2.54 cm) Type C format from 1976 onward. It introduced features such as shuttling and still framing, but the sound and picture reproduction attainable on the format were of just slightly lower quality than Quad (although 1" Type C's quality was still quite high). However, unlike Quad, 1" Type C machines required much less maintenance, took up less space, and consumed much less electrical power.

In Europe, a similar tape format was developed, called Type B. Type B machines (also known as BCN) used the same 1" tape as Type C but they lacked C's shuttle and slow-motion options. The picture quality was slightly better, though. Type B was the broadcast norm in continental Europe for most of the 1980s. 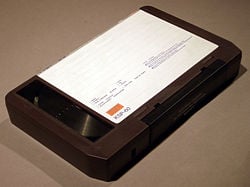 In 1969, Sony introduced a prototype for the first widespread video cassette, the 3/4" (1.905 cm) composite U-matic system, which Sony introduced commercially in September 1971 after working out industry standards with other manufacturers. Sony later refined it to Broadcast Video U-matic or BVU.

Panasonic had some limited success with its MII system, but never could compare to Betacam in terms of market share.

The next step was the digital revolution. Among the first digital video formats Sony's D-1, which featured uncompressed digital component recording. Because D-1 was extremely expensive, the composite D-2 and D-3 (by Sony and Panasonic, respectively) were introduced soon after. Ampex introduced the first compressed component recording with its DCT series in 1992. Panasonic trumped D-1 with its D-5 format, which was uncompressed as well, but much more affordable.

DV standard debuted in 1996 and has become widely used both in its native form and in more robust forms such as Sony's DVCAM and Panasonic's DVCPRO as an acquisition and editing format. However, due to concerns by the entertainment industry about the format's lack of copy protection, only the smaller MiniDV cassettes used with camcorders became commonplace, with the full-sized DV cassettes restricted entirely to professional applications.

For camcorders, Sony adapted the Betacam system with its Digital Betacam format, later following it up with the more low-cost Betacam SX and MPEG IMX formats, and the semiprofessional DV-based DVCAM system. Panasonic used its DV variant DVCPRO for all professional cameras, with the higher end format DVCPRO50 being a direct descendant. JVC developed the competing D9/Digital-S format, which compresses video data in a way similar to DVCPRO but uses a cassette similar to S-VHS media.

The introduction of HDTV production necessitated a medium for storing high-resolution video information. In 1997, Sony bumped its Betacam series up to HD with the HDCAM standard and its higher-end cousin HDCAM SR. Panasonic's competing format for cameras was based on DVCPRO and called DVCPRO HD. For VTR and archive use, Panasonic expanded the D-5 specification to store compressed HD streams and called it D-5 HD. 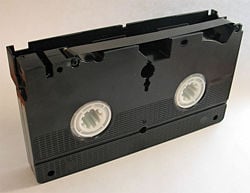 The first consumer videocassette recorders were launched in 1971 (based around U-matic technology), but it was not until Sony's Betamax (1975) and JVC's VHS (1976) were launched that videotape moved into the mass market, resulting in what came to be known as the "videotape format war," which VHS finally won.

VHS has been the leading consumer VCR format since then, though its follow-ups S-VHS, W-VHS and D-VHS never caught up in popularity.

In prerecorded video market VHS has been all but displaced with DVD, but until recently consumers could not make home recordings onto DVD disks. This last barrier to DVD domination has been broken with the recent advent of inexpensive DVD recorders and digital video recorders (DVR).

Several retail chains in the United States and in Europe planned to stop selling VHS equipment in 2004,[9] 2005,[10] and 2006.[11] Despite these plans, VHS recorders and tapes are still being sold in 2008 in major stores worldwide. 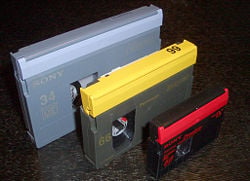 VHS-C was a downsized version of VHS, using the same recording method and the same tape, but in a smaller cassette. It was possible to play VHS-C tapes in a regular VHS tape recorder by using an adaptor. After Super VHS had appeared, a corresponding compact version, Super VHS-C, was released as well.

Video8 was an indirect descendant of Betamax, using narrower tape and smaller cassette. Because of intricate U-shaped tape loading and narrower tape it was not possible to develop an adapter from Video8 to Betamax. Video8 was later replaced with Hi8, which provided better resolution and high quality sound recording, and was similar to Super VHS-C.

In 1999, Sony backported DV recording scheme to 8-mm systems, creating Digital8. By using the same cassettes as Hi8, many Digital8 camcorders were able to play analog Video8/Hi8 recordings, preserving compatibility with already recorded analog tapes. As of 2008, Digital8 camcorders have been removed from the equipment offered by Sony.

Sony introduced another camcorder cassette format called MicroMV, but consumer interest was low due to the proprietary nature of the format and limited support for anything but low-end Windows video editors, and Sony shipped the last MicroMV unit in 2005.

Presently, MiniDV and its high definition cousin, HDV, are the two most popular consumer tape-based formats. The formats use different encoding methods, but the same cassette type.

Since 2001, when MicroMV was presented, no new tape-based formats have been introduced.

The latest trend in consumer camcorders shows the switch from tape-based to tapeless solutions, like built-in HDDs, optical disks and solid-state media.

Due to the constant development of techonology, the format of video tapes and information storage devices have also continued to evolve. These changes have made image and sound quality better, the device more compact, the retrieval of information easier, and the product more cost effective.

While technological advancement is natural and desirable, it poses a number of challenges for cultural heritage institutions who hold massive videotape collections. Historically and culturally important events and performances are preserved at archives, libraries, and other cultural heritage institutions. However, the preservation of data requires costly data migration for the reason that formats change, video tapes have a short (ten to twenty years) life span, and certain video players go out of production and are unrepairable. Many institutions have started to digitize videotaped records, however, more efforts are needed to process the enormous amount of records preserved on videotape in various formats.

While acid-free paper is the most stable, cost effective storage medium, videotapes can store motion pictures, sounds, and moving images. Archives and libraries, especially those which hold a large amount of recorded videotapes, continue to encounter these issues.