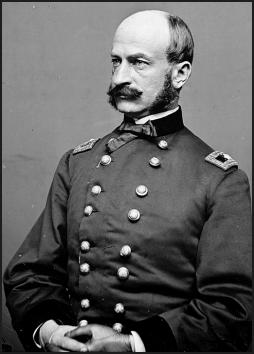 Baron Adolph Wilhelm August Friedrich von Steinwehr (September 25, 1822 – February 25, 1877) was a Prussian army officer who emigrated to the United States, became a geographer, cartographer, and author, and served as a Union general in the American Civil War. He was "an old friend" of Harriet Beecher Stowe, whom he met in 1862, and whose son served under his command.[1]

In May 1861 Adolph raised a volunteer regiment in New York City, the 29th New York Infantry, made up entirely of Germans and also known as the Astor Rifles or 1st German Infantry. It saw action at the 1st and 2nd Battles of Bull Run and Chancellorsville.

Like other Germans in America, he was opposed to slavery. Nearly 177,000 German immigrants served on the side of the Northern States during the American Civil War, while a much smaller number served the Confederacy.

Following his military service, von Steinwehr followed his natural talent and became the foremost American cartographer of his time, publishing scores of geography texts, maps, and atlases; many of which are available in print to this day.

Steinwehr was born in Blankenburg, in the Duchy of Brunswick, Germany, the son of a military family. His grandfather fought in the Prussian Army against Napoleon. He attended the Brunswick Military Academy and was commissioned a lieutenant in the Brunswick Army in 1841. He married Mary Florence Murrell, of Mobile, Alabama, later in 1841. six years later in 1847, von Steinwehr resigned his commission emigrated to the United States where he settled in Alabama.

Reportedly, he took part in the Mexican American War. He served as an engineer in the U.S. Coastal Survey, surveying the United States – Mexico border and Mobile Bay, Alabama, but his desire to serve in a combat position in the Mexican-American War was denied and he returned to Brunswick in 1849.

He returned to the United States in 1854 and purchased a farm near Wallingford, Connecticut. He later moved to New York state. From 1858 to 1860 he lived in Albany, New York. He offered the state his services as an architect and civil engineer. He designed a state arsenal that was built in Albany in 1858. When it was no longer needed as an arsenal, the structure became the Catholic Union, but it no longer stands.

At the start of the Civil War, Steinwehr raised a regiment, consisting primarily of German immigrants, the 29th New York Infantry, which he commanded at the First Battle of Bull Run. The regiment was in reserve during the battle, but served an important screening role during the Union retreat. He was promoted to brigadier general on October 12, 1861, and commanded the 2nd Brigade of Louis Blenker's division of the Army of the Potomac. This brigade was moved into John C. Frémont's Mountain Department on April 1, 1862, and it fought in the Valley Campaign against Thomas J. "Stonewall" Jackson. The corps was soon commanded by Major General Franz Sigel, another German immigrant, and Steinwehr was given the 2nd Division in that corps. It was assigned to the Army of Virginia, under John Pope, and participated in the Northern Virginia Campaign, but had little role in the Second Battle of Bull Run. The division did not fight at the Battle of Antietam or the Battle of Fredericksburg.

The command of what was now called the XI Corps changed to Major General Oliver O. Howard in 1863 and Steinwehr continued to command the division in the Battle of Chancellorsville and the Battle of Gettysburg. Thus, Steinwehr was at the center of two embarrassing Union defeats: the victim of the surprise flanking attack by Stonewall Jackson at Chancellorsville on May 2, 1863, and the overwhelming attack by Richard S. Ewell's Second Corps on the first day of Gettysburg, July 1, 1863, causing the division to retreat back through the town to Cemetery Hill, losing many soldiers as prisoners. These two defeats seriously degraded the combat effectiveness of the XI Corps and humiliated many of the German immigrant soldiers in the corps. Nevertheless, Steinwehr was well thought of by his superiors. After Chancellorsville, General Howard write that Steinwehr's bearing during the battle was "cool, collected and judicious." Brigadier General Alpheus Williams, a fellow division commander, described him as a "remarkably intelligent and agreeable person."

In September 1863 the XI Corps was transferred to the Western Theater to help relieve the besieged Union army in Chattanooga, becoming part of the Army of the Cumberland. There, it was combined with the equally depleted XII Corps to form the new XX Corps. That corps fought under William T. Sherman in the Atlanta Campaign and March to the Sea, but Steinwehr was essentially reorganized out of his job and he commanded no more combat units during the war. He resigned his commission on July 3, 1865.

In the 1870s von Steinwher, a prolific author, produced scores of maps, many atlases and Geography school texts. He is refered to as the best cartographer of his time.

After the war, von Steinwehr was employed as a geographer and cartographer. He returned to Connecticut to accept a professorship at Yale University in military science. He moved to Washington, DC, then to Ohio, and returned to New York. He died in Buffalo, New York, on February 25, 1877, while on a business trip. He received full military honors in Buffalo and Albany, and is buried in Albany Rural Cemetery, Menands, New York.

Von Steinwehr's Geography text A School Geography: Embracing a Mathematical, Physical, and Political Descriptions of the Earth was published in 1870 and was used by students for decades. He was co-author of Primary Geography (1870) and An Elementary Treatise on Physical Geography (1873). Von Steinwehr was the editor of his most ambitious work The centennial gazetteer of the United States: A geographical and statistical encyclopaedia of the states, territories, counties, townships… etc., in the American Union… (1874) which is is more than 1,000 pages long.

In 1898 an imposing funeral monument was erected to von Steinwehr and dedicated in well-attended ceremonies on Memorial Day. He is memorialized by the prominent Steinwehr Avenue in Gettysburg, Pennsylvania.

Retrieved from https://www.newworldencyclopedia.org/p/index.php?title=Adolph_von_Steinwehr&oldid=1091805
Categories:
Hidden category:
This page was last edited on 17 December 2022, at 17:32.
Content is available under Creative Commons Attribution/Share-Alike License; additional terms may apply. See Terms of Use for details.