Abd-al-latif, Abd-el-latif or Abd-ul-Latif (1162 – 1231), also known as al-Baghdadi (Arabic,عبداللطيف البغدادي), born in Baghdad, Iraq, was a celebrated physician, historian, Egyptologist and traveler, and one of the most voluminous writers of the Near East in his time. His writing provides valuable information on events and personalities of his time, including the Mongol Empire Mongol invasion as well as on a famine in Egypt when the Nile failed to flood in 1200 and in 1201 C.E. His wide travel throughout the Muslim world, despite its political disintegration, testifies to the ease of movement that existed at the time. Royal patronage from the Ayyubids enabled him to concentrate on research and teaching so that he rarely had to practice as a physician. The breadth of his interests and achievements, including expertise in aspects of religious science as well as medicine and mathematics, suggests that artificial divides between religious and non-religious learning did not exist. His pioneering work in the field of autopsy, too, suggests that learning for him was not restricted to copying and remembering from earlier books, which is how some characterize Islamic education.[1]

El-latif’s legacy shows that disputation and experimentation were valued aspects of scholarly endeavor, at least during the thirteenth century, in the Muslim world. 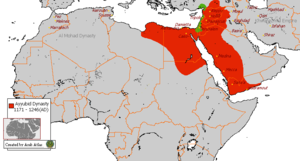 The world in which el-latif traveled, showing Mosul, Baghdad and (in Red) the Ayyubid Sultanate founded by Saladin.

El-latif was born in Baghdad where the Abbasids were technically still Caliph but at a time when real power was exercised by the Seljuks. He lived for much of his life in territory controlled by the Ayyubids, and enjoyed the patronage of Saladin. His father, Yusuf, was a preacher (khatîb ) in the Southwest of greater Baghdad but was wealthy enough, or had appropriate contacts to provide his son with what was then a classical education. Embarking on a career as a scholar, el-latif traveled to Mosul (1189-1190) and Damascus (1191) to study with some of the leading intellectuals under whose direction he extended his interests into medicine, mathematics and philosophy. He also studied jurisprudence and the traditions, later writing a book on the state of medicine during the life of Muhammad. Although he rarely had to practice as a physician, he was considered to be a qualified medical doctor. At this stage of his career he was especially attracted to the ideas of Ibn Sina. He studied the Greek physicians, such as Hippocrates, Dioscorides, Rufus of Ephesus, and Galen as well as Muslims such as Ibn al-Tilmidh, Ahmad ibn abi l-Ashath, and Yuhanna ibn Sarabiyun. Later, he substituted al-Farabi for Ibn Sina as the Muslim scholar with whose work he identified his own. He was an early admirer, too, of the Jewish scholar and physician, Maimonides.

An interesting memoir of Abdallatif, written by himself, has been preserved with additions by Ibn Abu-Osaiba (Ibn abi Usaibia), a contemporary. From this work, we learn that the higher education in Baghdad included a minute and careful study of the rules and principles of grammar, and memorizing the Qur'an, several important works of philology and jurisprudence, and the choicest Arabic poetry. However, attention was paid to understanding the meaning of what was memorized, and el-latif also refers to use of disputation in discussing philosophical and metaphysical topics. He wrote:

When you read a book, make every effort to learn it by heart and to master its meaning. Imagine the book to have disappeared, and that you can dispense with it, unaffected by its loss.[2]

This suggests an interest in internalizing the text’s meaning as well as its contents. Memorization of texts may also have played a role because they were expensive and many students would not be able to afford a copy of their own. Later, el-latif engaged in scientific experimentation.

Career as a Scholar

Obtaining a letter of recommendation from Saladin’s vizier, al-qadi al-Fadil (d.1199), he traveled to Egypt in 1191, where he met with Maimonides, who owed his own post at the royal court to al-Fadil’s sponsorship. In Egypt, el-latif attracted royal patronage for himself and became part of the circle of intellectuals around Saladin. He then taught medicine and philosophy at Cairo's AL-Azhar university and at Damascus for a number of years, and afterwards, for a shorter period, at Aleppo. He spent some time in Jerusalem during Saladin's residence there.

El-latif not only enjoyed royal patronage, but supported this type of sponsorship as essential for the pursuit of academic inquiry:

Abd al-Latif was able to concentrate on textual research and teaching without being bothered too much by the ‘annoyances’ of the practical side of medicine because he received ample royal patronage from Sultan Saladin and other Ayyubid rulers. In Abd al-Latif’s eyes, the most excellent scholars earned the right to be granted this kind of remuneration in order not to have to follow the ‘basic’ occupations.[3]

His love of travel led him to visit different parts of Armenia and Asia Minor in his later years. He was in the process of setting out to perform the pilgrimage at Mecca when he died at Baghdad. He was buried in the Wardiyah cemetery besides his father. The ease with which he traveled about the Muslim world, despite its political disunity at the time, suggests that movement from sultanate to sultanate was neither difficult nor unusual. This is similar to the experience of Ibn Battuta, who took up legal posts in a number of different Muslim states, demonstrating that political separation did not result in a great deal of diversity in the practice of Islamic law. He appears to have had an interest early in his career in alchemy but to have abandoned that at about the time he identified himself with al-Farabi.

This work was one of the earliest works on Egyptology. It contains a vivid description of a famine caused, during the author's residence in Egypt, by the Nile failing to overflow its banks. He also wrote detailed descriptions on ancient Egyptian monuments.[4] This work may also have been the source of the allegation that when the Muslims invaded Egypt, they burnt the great Library of Alexandria. Commenting that this must already have been destroyed either in 47 B.C.E., or in 390 under Theodosius I, he discusses why el-latif “invented” this story and surmises that it probably conformed with a certain M view that saw all non-Islamic learning as ‘barbaric’. Noting that this story plays into the hands of those who regard Islam as anti-intellectual, he writes that:

Perhaps he was a pious Muslim chronicler who wrote what he believed ought to have taken place. He invented a moment of history - as did the Hebrew author of the Books of Chronicles when he reversed the clear truth of a passage in the Book of Kings and wrote that Hiram of Tyre gave cities to Solomon. Perhaps both writers sought to express fully their deepest vision of the will of God …[5]

Al-Baghdadi wrote that during the famine in Egypt in 597 AH (1200 C.E.), he had the opportunity to observe and examine a large number of skeletons. This was one of the earliest examples of a postmortem autopsy, through which he discovered that Galen was incorrect regarding the formation of the bones of the lower jaw and sacrum.[7] This also represents use of what later would be called the scientific method, that is, use of experiment and verification in order to test a scientific hypothesis, or to gain knowledge. El-latif may well qualify as a pioneer in use of verification, which he also insisted was vital to the study of Islamic traditions (despite what appears to be poetic license in his description of the conquest of Alexandria.

The Arabic manuscript was discovered in 1665 by Edward Pococke the orientalist, and preserved in the Bodleian Library. He then published the Arabic manuscript in the 1680s. His son, Edward Pococke the Younger, translated the work into Latin, though he was only able to publish less than half of his work. Thomas Hunt attempted to publish Pococke's complete translation in 1746, though his attempt was unsuccessful.[8] Pococke's complete Latin translation was eventually published by Professor Joseph White of Oxford in 1800. The work was then translated into French, with valuable notes, by Silvestre de Sacy in 1810.[8]

Al-Baghdadi's Mukhtarat fi al-Tibb was one of the earliest works on hirudotherapy. He introduced a more modern use for medicinal leech, stating that leech could be used for cleaning the tissues after surgical operations. He did, however, understand that there is a risk over using leech, and advised patients that leech need to be cleaned before being used and that the dirt or dust "clinging to a leech should be wiped off" before application. He further writes that after the leech has sucked out the blood, salt should be "sprinkled on the affected part of the human body."[9]

Medicine from the Book and the Life of the Prophet

He wrote a book called Al-Tibb min al-Kitab wa-al-Sunna (Medicine from the Book and the Life of the Prophet) describing the Islamic medical practices from the time of Muhammad.[10]

Al-Baghdadi was also the author of a major book dealing with diabetes.[10]

Some of El-latif’s writing is still in print in various European languages as well as in Arabic versions. Although his name is less well known as that of some other Muslim scholars, his legacy represents a solid and significant contribution. Irwin comments that right up until the nineteenth century, his work was at the center of “what was still being studied by Arabists right up top the early nineteenth century.”[11] An important aspect of his legacy was that he did not draw boundaries around knowledge, happily drawing on the Greek heritage and seeing himself as belonging to a community of learning that included at least one Jew, Maimonides.