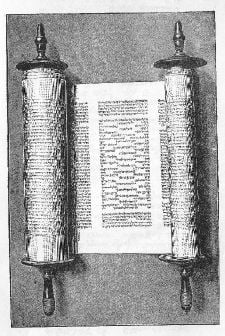 Like other Karaites, Aaron ben Elijah argued that the Torah alone was normative for Jews and rejected the Oral Law promulgated by the rabbis of the Talmud.

Aaron ben Elijah, the Latter (1328 or 1329[1] – 1369) is often held to be the most prominent Karaite theologian, who sought to elevate Karaite philosophy to the highest standards of his day. The Karaites were a branch of Judaism that rejected the so-called "Oral Law" promulgated by mainstream rabbis in the Talmud. Karaites insisted that only those divine laws specifically found in the scriptures of the Torah are truly God-given.

Aaron did much to restore the intellectual confidence of the Karaite community, which had been declining as a result of the criticism of rabbinical sages such as Saadia Gaon (ninth century) and Maimonides (twelfth century). His books are considered the most comprehensive explication of Karaite philosophy, and his work remained immensely influential among the Karaites throughout their history.

Aaron is referred to as "the Latter" or "the Younger" to distinguish him from another Aaron ben Elijah, also a theologian from Constantinople, which was the center of Karaite learning at the time. He is sometimes distinguished from the elder Aaron Ben Elijah by the title "of Nicomedia," where he lived before moving to Constantinople. 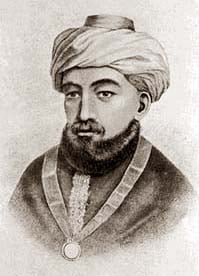 While little is known about his personal life, Aaron ben Elijah is considered in Karaite tradition to be the equal of Maimonides, the most distinguished Jewish scholar of the time, who was an outspoken critic of the Karaites. Aaron saw Maimonides, who lived more than a half-century before Aaron, as his rival and devoted much energy to defending the Karaites from Maimonides' attacks. To achieve this, Aaron studied the extensive religious literature of both rabbinical Judaism and Islam, as well as that of the Karaites themselves.

The result of his studies was Etz HaChayyim (Tree of Life; 1346), a philosophical work modeled after Maimonides' Guide to the Perplexed. One of the chief criticisms of the work is that it imitates Maimonides' Guide too slavishly in terms of both structure and style. In 1354, while living in Constantinople, Aaron composed his second major work, Gan Eden (The Garden of Eden), explaining the commandments of the Bible and defending the Karaite legal code, which did not admit the Oral Law of the traditional Jewish rabbis. In 1362 he wrote Keter Torah (Crown of the Torah), a comprehensive commentary on the Pentateuch.

Aaron was a versatile compiler and an eclectic, if not always original, philosopher. He succeeded in restoring a degree of intellectual prestige to the Karaite community, which had been in decline since it the time of the great Talmudic philosopher and rhetorician Saadia Gaon. Indeed, some of Aaron's critiques of the Maimonidean world view placed the Talmudists on the defensive for the first time in centuries.

Like Maimonides and other Jewish philosophers active in the Islamic world, Aaron was heavily influenced by the works of Aristotle. Unlike Maimonides, however, Aaron accepted the Muslim philosophical system of the Kalam, combining atomism with Aristotelean views to reconcile revelation with reason. In this, he differed not only from Maimonides but also from Aaron Ben Elijah the Elder, who held that revelation was often beyond reason and thus sided with Maimonides on this issue. According to the younger Aaron, the theology of the Kalam is the natural religion arrived at by Abraham through meditation and systematized by the Mosaic Law. Meanwhile, the neo-platonic philosophy, adopted by Christianity in its hostility to Judaism, is a heterogeneous foreign product, harmful to the development of the Torah.

Aaron's book Etz HaChayyim ("Tree of Life") consists of 114 chapters and is designed as a Karaite answer to Maimonides "Guide to the Perplexed": Gan Eden manuscript on paper, dating around the fourteenth or fifteenth century.

Aaron's work on the Commandments, entitled Gan Eden, consists of 25 sections and 194 chapters, as well as nine smaller juridical articles, which became of paramount importance to the Karaites. Although less broad that his earlier work, it is particularly significant in Karaite history, as it deals with the core issue of Karaite tradition: divine law.

Aaron follows a rational approach to the commandments, similar to the one espoused by Maimonides. He opens with the principle that instilling the belief in God's unity and His government of the world is the ultimate purpose of every commandment. It is thus the duty of humanity to seek the underlying objective of each commandment. For example, the goal of the Sabbath is to inculcate a belief in the Divine creation and guidance of the world. Other festivals are intended to counteract the influences of paganism and fatalism.

In its entirety, Gan Eden is considered by many to be the best and most comprehensive exposition of the Karaite system of the law of the Torah, presenting the opinions of all Aaron's predecessors with impartial and frank criticism. It is mainly because of this work that Aaron wields such a great influence upon the Karaites to this day.

This is a commentary on the Torah, styled after Abraham Ibn Ezra's earlier work. It's title means "Crown of the Law." Like Aaron's earlier writings, it also contains a review of the philosophical and exegetical interpretations given by his predecessors, with critiques of their views where necessary. Particularly interesting is his "Preface," in which he states the main differences between the approaches to biblical exegesis of Talmudic and Karaite Judaism, in which he claims—as did the Karaites generally—that the rabbis take liberties with the text and end up confusing their own opinions with divine revelation.

By bringing the Aristotelian method to the Karaite tradition, Aaron Ben Elijah did for Karaism what Thomas Aquinas did for the Catholics. Indeed, Aaron presented the philosophy of the Karaite Jews as no one had done previously and no one has done since. His work laid the foundation for the re-flourishing of Karaite culture in the Middle Ages and helped this fascinating tradition survive into the present day. While his works are rarely read today, there can be little doubt that his efforts did much to strengthen his community's intellectual culture, which had been on the retreat since the time of Saadia Gaon and had suffered greatly in the shadow of the age's great Talmudists, especially Maimonides.