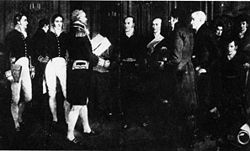 The Treaty of Ghent, signed on December 24, 1814, in Ghent, Belgium, was the peace treaty that ended the War of 1812 between the United States and the United Kingdom of Great Britain and Ireland.

The war had become a stalemate and the treaty returned the two countries to the status quo before the war. The treaty afforded the United States the recognition that its Navy was equal to the British Navy and that the British were no longer free to press United States sailors into the service of the United Kingdom.

Neither side had been successful in invasions designed to gain bargaining chips. The United States strategy was not to annex Canada as much as it only wanted to seize lands for bargaining over other issues. The prewar issues of trade restraints and impressment of United States sailors into the Royal Navy were so closely tied to the European war against Napoleon (now in exile) that they no longer mattered and were not mentioned. The Indian menace had been destroyed, ending a major cause of the war. Public opinion strongly desired peace and there was no reason to continue the war. The treaty restored prewar boundaries and released all prisoners. The treaty made no major changes, but did make a few promises. Britain promised to return captured sailors and other American citizens, but instead a few years later paid the U.S. £250,000 for them. British proposals to create an Indian buffer zone inOhio and Michigan collapsed after the Indian coalition fell apart. Weak guarantees regarding American treatment of the Indians in article IX were ignored.

Fighting immediately stopped when news of the treaty reached the battlefronts, but this happened after the Americans commanded by Andrew Jackson won a decisive victory at the Battle of New Orleans in January 1815. The U.S. Senate unanimously approved the treaty on February 16, 1815, and President James Madison exchanged ratification papers with a British diplomat in Washington on February 17—the treaty was proclaimed on February 18. Eleven days later (March 1) Napoleon escaped from Elba, rekindling the European wars, and forcing the British to concentrate their forces against the threat he posed.

The War of 1812 made the United States a stronger nation. Americans became more united and patriotic. Albert Gallatin, Secretary of the Treasury from 1801 to 1813, said that before the conflict Americans were becoming too selfish and too prone to think in local terms.

The war has renewed and reinstated the national feeling and character which the Revolution had given and which were daily lessening. The people have now more general objects of attachment, with which their pride and political opinions are connected. They are more American; they feel and act more as a nation; and I hope that the permanency of the Union is thereby better secured.

Retrieved from https://www.newworldencyclopedia.org/p/index.php?title=Treaty_of_Ghent&oldid=1034122
Categories:
Hidden category:
This page was last edited on 25 March 2020, at 21:53.
Content is available under Creative Commons Attribution/Share-Alike License; additional terms may apply. See Terms of Use for details.