Carp is a common name for various freshwater fish of the family Cyprinidae, a very large group of fishes that dominates the fish faunas of Eurasia and North America. In North America, the common name most frequently used for this family is the minnow family, while in Eurasia it is generally known as the carp family (Nelson 1994). As a result, some ascribe the name carp to all cyprinid fishes. In colloquial use, however, carp usually refers only to several larger cyprinid species, such as Cyprinus carpio (common carp), Carassius carassius (Crucian carp), Ctenopharyngodon idella (grass carp), Hypophthalmichthys molitrix (silver carp), and Hypophthalmichthys nobilis (bighead carp).

Carp have been important as a food fish since ancient times, and cyprinids, mainly carp, were among the first, if not the first, fish raised in aquaculture, tracing to China ca. 3500 B.C.E. In particular, carp are esteemed as a food fish in China, Japan, and Taiwan. They are also valued for angling and as popular ornamental aquarium and pond fish. The two most notable ornamental carps are goldfish ((Carassius auratus) and koi (a domesticated variety of the common carp, Cyprinus carpio. Ecologically, they are important in food chains.

Cyprinidae, the group to which carp belong, is the largest family of freshwater fishes in the world, and may be the largest family of vertebrates (with the possible exception of Gobiidae) (Nelson 1994). Representatives very rarely occur in brackish water (Nelson 1994). Common names associated with various members of this family include minnow, carp, chub, and shiner.

Members of the Cyprinidae are characterized by pharyngeal teeth in one or two rows, with no more than eight teeth per row; usually thin lips, an upper jaw usually protrusible; and an upper jaw bordered only by premaxilla (Nelson 1994). The size ranges from the smallest freshwater fish, Danionella tanslucida, in which the longest specimen known is 12 millimeters, to the barbine Catlocarpio siamensis of Thailand, which is known to reach 2.5 meters in length and probably reaches three meters (Nelson 1994).

The designation "carp" is not a formal taxonomic rank, but rather is the common name used for numerous species scattered over several genera within Cyprinoidea. However, in some uses, particularly in Eurasia, the term also is used to designate all members of the family Cyprinidae.

Carp are believed to have originated in Asia, and aquaculture was used in China ca. 3500 B.C.E., when some fishes, mainly carp, were held in artificial lakes when waters lowered after river flooding. The oldest known document on fish culture was written by a Chinese politician, Fan-Li, in 475 B.C.E. (Parker 1995).

Carp were introduced to England from western Europe during the thirteenth century, when they were cultivated mainly by monks. They were subsequently introduced into North America in 1877. Fish were released in ponds in Druid Hill Park in Baltimore, Maryland. Later, surplus populations were released in Washington D.C. This was a project of Rudolf Hessel, a fish culturist in the employ of the United States Government. There was substantial favorable publicity and carp were widely introduced throughout the United States. Introduced carp readily adapted to their new environment, spreading rapidly throughout any drainage area in which they were released. Carp have since become naturalized in almost every water in which they were introduced.

The value of carp as food varies. While tasty when grown in clean water, carp tend to have small bones and fish that live in muddy waters can acquire a muddy flavor (Magri MacMahon 1946). In China, Japan, and Taiwan, carp are esteemed as food fish and are also considered to be signs of good fortune, so are often served at banquets and other formal meals. In Central and Eastern Europe, carp are also much appreciated, and are traditionally eaten on Christmas Eve in the Czech Republic, Slovakia, Germany, Croatia, Hungary and Poland. In Australia, United Kingdom, and North America, on the other hand, carp are rarely eaten. The common carp is one of the most aquacultured consumption fish in the world, produced in the hundreds of thousands of tons annually.

Carp are similarly variable in terms of angling value. In Europe, even when not fished for as food, they have been eagerly sought out by anglers, being considered wily fish that are difficult to hook (Magri MacMahon 1946). In the United States, on the other hand, the carp has not yet gained game fish status and in the northern states at least is sometimes considered a trash fish of no value (Eyden 1993).

Carp are an important subsistence aquaculture product, and in China, the cyprinids (including carp) are the dominant farmed fish. Carp have been cultivated in complex polycultures since the seventh century C.E. Grass carp, silver carp, and common carp were common during the Tang dynasty in China (618-907 C.E.) due to their dissimilar feeding habits. Grass carp are fairly unique in that they eat live plant matter with pharyngeal grinding teeth, on which they will feed continuously at the proper temperatures, consuming several times their body weight in grass per day. The other two species are filter feeders, herbivorous and omnivorous respectively. These are often used in a grass/fish polyculture, but historically one of the important food production systems in China has, on a subsistence level, been rice/fish culture. The fish provide not only human nutrition, but crop fertilizer, and can increase rice yields per hectare. However, this system tends to be compatible only with small operations using genotypically lower-yielding tall rice varieties and is not feasible on a commercial scale. Other polycropping systems involving carp include livestock/carp (in which livestock wastes fertilize carp ponds, or more indirectly fertilize row crops whose green manure fertilizes the ponds), and carp/sericulture (in which pond silt is used to fertilize mulberry trees that support silkworm populations.

Carp, along with many of their cyprinid relatives, are popular ornamental aquarium and pond fish. The two most notable ornamental carps are goldfish and koi. Goldfish (Carassius auratus) were kept as ornamental fish in China for hundreds of years before being introduced to Japan in the fifteenth century, and to Europe in the late seventeenth century. The koi, a domesticated variety of common carp (Cyprinus carpio), was also originated from China and widely spread in Japan. The koi are historically a prevalent symbol in Japanese culture of good luck. They are also popular in other parts of the world as pond fish. Goldfish and koi have advantages over most ornamental fishes, as they are tolerant of cold (they can survive in temperatures as low as four degrees Celsius), and can survive low oxygen levels.

Sterile carp sometimes are used as natural agents for control of pond vegetation, due to their ability to consume large amounts of plant matter. 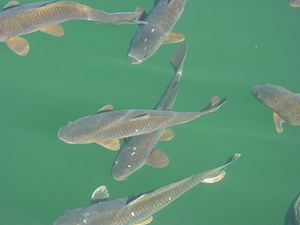 Carp gather near a dock in Lake Powell

Carp have attributes that allow them to be an invasive species—a species that invades and dominates new ecosystems with serious negative effects to the ecosystem and native fauna.

Carp have been introduced, often illegally, into many countries. In some countries, due to their habit of grubbing through bottom sediments for food and alteration of their environment, they destroy, uproot and disturb submerged vegetation causing serious damage to native duck and fish populations. In Australia, there is enormous anecdotal and mounting scientific evidence that introduced carp are the cause of permanent turbidity and loss of submerged vegetation in the Murray-Darling river system, with severe consequences for river ecosystems, water quality, and native fish species.

Efforts to eradicate a small colony from Tasmania's Lake Crescent without chemicals have been successful; however, the long-term, expensive, and intensive undertaking is an example of both the possibility and difficulty of safely removing the species once it is established. The following are some species of cyprinids with the common name of carp.

Retrieved from https://www.newworldencyclopedia.org/p/index.php?title=Carp&oldid=968569
Categories:
Hidden category:
This page was last edited on 13 January 2023, at 00:56.
Content is available under Creative Commons Attribution/Share-Alike License; additional terms may apply. See Terms of Use for details.