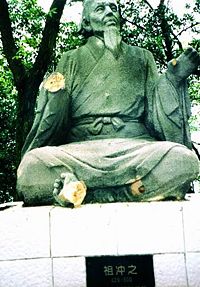 China is one of the countries which had the most advanced mathematics before fourteenth century. Zu Chongzhi is known for his accurate approximation for π for the following 900 years. His best approximation was between 3.1415926 and 3.1415927 (355/113). Zu also calculated one year as

Chinese mechanical engineer Ma Jun (c. 200-265 C.E.) originally invented the South Pointing Chariot, a two-wheeled vehicle which was designed to constantly point south by the use of differential gears without magnetic compass. Zu Chongzhi made a major improvement to it including the adoption of new bronze gears.

Zu Chongzhi's ancestry was from modern Baoding, Hebei. To flee from the ravages of war, Zu's grandfather Zu Chang moved to the Yangtze, as part of the massive population movement during the Eastern Jin. Zu Chang (祖昌) at one point held the position of "Minister of Great Works" (大匠卿) within the Liu Song and was in charge of government construction projects. Zu's father, Zu Shuo (祖朔) also served the court and was greatly respected for his erudition.

Zu was born in Jiankang. His family had historically been involved in astronomy research, and from childhood Zu was exposed to both astronomy and mathematics. When he was only a youth his talent earned him much repute. When Emperor Xiaowu of Liu Song heard of him, he was sent to an Academy, the Hualin Xuesheng (華林學省), and later at the Imperial Nanjing University (Zongmingguan) to perform research. In 461 in Nanxu (today Zhenjiang, Jiangsu), he was engaged in work at the office of the local governor.

Zu Chongzhi, along with his son Zu Gengzhi, wrote a mathematical text entitled Zhui Shu (Method of Interpolation). It is said that the treatise contains formulas for the volume of the sphere, cubic equations and the accurate value of pi. Sadly, this book didn't survive to the present day, since it has been lost since the Song Dynasty.

Most of Zu's great mathematical works, are recorded in his lost text Zhui Shu. Most scholars argue about his complexity. Since traditionally, the Chinese developed mathematics as algebraic, and equational. Logically, scholars assume that his work, Zhui Shu yields methods of cubic equations. His works on the accurate value of pi describes the lengthy calculations. Zu used the method of exhaustion, inscribing a 12,288-gon. Interestingly, Zu's value of pi is precise to eight decimal places. No mathematician since his time, computed a value this precise until another 900 years. Zu also worked on deducing the formula for the volume of the sphere. 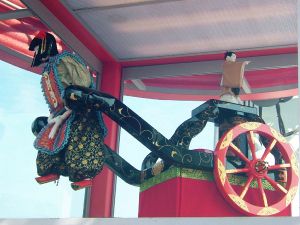 Reconstruction of a South Pointing Chariot, 2005 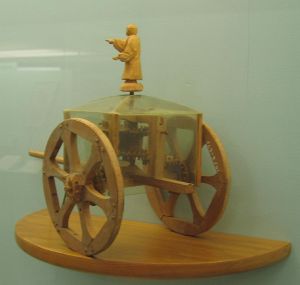 Model in the Science Museum in London

The South Pointing Chariot device was invented by a number of engineers since antiquity in China, including Zhang Heng (CE 78–139), and Ma Jun (c. 200-265 C.E.). It was a two-wheeled vehicle that incorporated an early use of differential gears to operate a fixed figurine that would constantly point south, hence enabling one to accurately measure their directional bearings. It is a non-magnetic compass vehicle.

Although the chariot can technologically be made to point to any direction, the south was selected based upon ancient Chinese thought that the "Son-of-heaven" (天子) faces the south. In ancient Chinese thought, geographical direction is not value neutral but highly value loaded. The idea was incorporated into Feng shui, a general geographical-astronomical theory of fortune.

The literal translation of this chariot in Chinese character, "指南車," is a combination of two characters, "vehicle" (車) and "instruction" or "teaching." The character of "teaching" (指南) consists of two Characters, "pointing" (指) and "south" (南). Hence, "teaching" is expressed as "pointing to the sought." Thus, the chariot is a vehicle for a teacher or a master or Xian, Toaist immortal saint.

This effect was achieved not by magnetics (like in a compass), but through intricate mechanics, the same design that allows equal amounts of torque applied to wheels rotating at different speeds for the modern automobile. After the Three Kingdoms period, the device fell out of use temporarily. However, it was Zu Chongzhi who successfully re-invented it in 478 C.E., as described in the texts of the Song Shu (c. 500 C.E.) and the Nan Chi Shu, with a passage from the latter below:

When Emperor Wu of Liu Song subdued Guanzhong he obtained the south-pointing carriage of Yao Xing, but it was only the shell with no machinery inside. Whenever it moved it had to have a man inside to turn (the figure). In the Sheng-Ming reign period, Gao Di commissioned Zi Zu Chongzhi to reconstruct it according to the ancient rules. He accordingly made new machinery of bronze, which would turn round about without a hitch and indicate the direction with uniformity. Since Ma Jun's time such a thing had not been.[3]

Zu Chongzhi made a new improved vehicle with bronze gears for Emperor Shun of Liu Song. The first true differential gear used in the Western world was by Joseph Williamson in 1720.[4] Joseph Williamson used a differential for correcting the equation of time for a clock that displayed both mean and solar time.[4] Even then, the differential was not fully appreciated in Europe until James White emphasized its importance and provided details for it in his Century of Inventions (1822).[4]

Retrieved from https://www.newworldencyclopedia.org/p/index.php?title=Zu_Chongzhi&oldid=1044042
Categories:
Hidden category:
This page was last edited on 16 October 2020, at 18:00.
Content is available under Creative Commons Attribution/Share-Alike License; additional terms may apply. See Terms of Use for details.