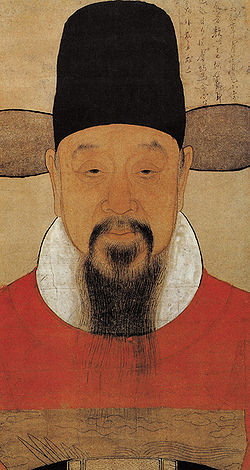 Xu Guangqi (Traditional Chinese: 徐光啟; Simplified Chinese: 徐光启; Hanyu Pinyin: Xú Guāngqǐ; Wade-Giles: Hsu Kuang-ch'i, Christian name Paul Hsü) (1562 – 1633), courtesy name Zixian (子先), was a Chinese bureaucrat, agricultural scientist, astronomer, and mathematician of the Ming Dynasty. Born in Shanghai, Xu passed the first level of civil service examinations at the age of nineteen, and the highest level in 1904. He spent the majority of his time in positions of high office serving the Ming court. Xu was greatly interested in the European technology, geography, astronomy and mathematics then being introduced to China by Jesuit missionaries.

Xu studied with Matteo Ricci in Nanjing, and in 1603 was baptized "Paul" by the Jesuit missionary Joao de Rocha. He became the most influential Chinese Christian before the twentieth century. In collaboration with Matteo Ricci he translated several Western texts, including the first six chapters of Euclid’s Elements, into Chinese. He also experimented with Western-style irrigation methods and the cultivation of sweet potatoes, cotton, and the nu zhen tree. He promoted the use of wet-rice in the northeast of China and wrote an agricultural treatise, Nong Zheng Quan Shu, containing some 700,000 written Chinese characters. He encouraged the Ming Emperor to adopt Western armaments against the Manchu, a strategy which was effective until the Manchu learned European iron-smelting technology and acquired Western arms themselves.

Though the Ming Dynasty (1368-1644) was characterized by political unrest, China experienced an intellectual renaissance in many fields including trade and industry, science, technology, philosophy and literature. Increased economic development, especially in the Yangtze Valley, motivated the emergence of scholars like Xu Guang-qi, who sought to explore new technologies and sciences, and modernize old ones. Xu Guang-qi was aware that Chinese mathematics had been in a period of decline for some time; the earlier efforts at algebra had been almost forgotten. Xu attributed this decline to academics which neglected practical learning, and also to confusion between mathematics and numerology. The brilliant "tian yuan" or "coefficient array method" or "method of the celestial unknown" for solving equations, which had been expounded by Li Zhi in the thirteenth century, was no longer understood in China. The remarkable progress which the Chinese had made in algebra had been largely forgotten, and practical problems which had been solved by algebra were now solved by other means. Xu Guang-qi himself had never read the “Nine Chapters on the Mathematical Art,” and The Ten Classics were thought to have been lost.

In the late Ming Dynasty, the Chinese came into contact with European science through Jesuit missionaries, such as Matteo Ricci, who introduced various new technological devices and scientific theories, as well as European geography, astronomy and mathematics as a means of attracting the interest of educated Chinese. 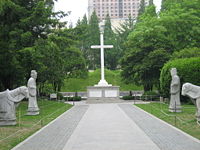 The Tomb of Xu Guangqi at Guangqi Park, Shanghai.

Xu Guangqi was born in 1562 in Shanghai. Xu passed his first civil service examination at the age of nineteen, and obtained his chin-shih degree, the highest level in the civil-service examination, in his thirties. In 1596, Xu was introduced to Catholicism by the Jesuit Lazzaro Cattaneo in Guangzhou, and in 1600, on his way to Beijing, he visited Matteo Ricci in Nanjing. He visited the Nanjing compound again in 1603 to learn Christian doctrines and was baptized "Paul" by the Jesuit missionary Joao de Rocha. After this, his criticism of Chinese intellectual life became harsher and he came to deem China to be inferior to the West, specifically in mathematics.

In 1604, Xu Guangqi sat for the highest examinations in the country and was appointed to the Hanlin Academy.[1] After this, he spent the majority of his time in positions of high office serving the Ming court. From 1607 until 1610, Xu was forced to retire from public office, and returned to his home in Shanghai. During this time he experimented with Western-style irrigation methods. He also experimented with the cultivation of sweet potatoes, cotton, and the nu zhen tree.

He was called once more to serve the Chinese bureaucracy, where he rose to a high rank and became known late in his career simply as "The Minister." While he served in office, he continued to experiment and learn of new agricultural practices, promoting the use of wet-rice in the northeast of China. From 1613 until 1620, he often visited Tianjin, where he helped organize self-sufficient military settlements (tun tian).

In 1625, Xu resigned from is position, returned to Shanghai and wrote the Book of Agriculture. Xu regained his position in 1628 and wrote the Book of Annals of Zong Zhen with Li Zhizao. He also translated many books written by Ricci.[2] During the last few years of his life Xu Guang-qi was an extremely influential figure at the Imperial Court of the Ming Dynasty. The Ming came under attack by from the Manchu, descendants of the Juchen tribes who had ruled North China as the Chin dynasty in the twelfth century. Xu Guang-qi persuaded the Ming emperor to have his army adopt advanced European artillery against the Manchu. The strategy was effective at first, but after Xu Guang-qi's death, the Manchu learned European iron-smelting technology and acquired Western arms themselves. They defeated the Ming dynasty in 1644. Xu Guangqi died in Shanghai in 1633. His tomb still exists in Shanghai in Guangqi Park, just a short walk from the Xujiahui Cathedral in the Xujiahui area on Nandan Road (南丹路).

Translation of Books into Chinese 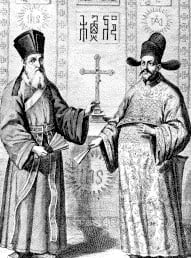 The Italian Jesuit Matteo Ricci (left) and the Chinese mathematician Xu Guangqi (徐光啟) (right) in an image from Athanasius Kircher's China Illustrata, published in 1667. The Chinese edition of Euclid's Elements (幾何原本, Chi-ho yüan-pen), was printed in 1607.

Matteo Ricci (October 6, 1552 – May 11, 1610) (利瑪竇, |利玛窦 Lì Mǎdòu, Li Ma-tou, Li Madou) was an Italian Jesuit priest and missionary who eventually mastered Chinese classical script, and attracted the interest and gained the respect of Chinese officials and scholars by demonstrating his knowledge of astronomy, mathematics and geography, and by introducing them to European clocks, prisms, astronomical instruments, oil paintings, musical instruments, picture books and architectural drawings. Ricci produced the first world map in Chinese, and wrote a number of Christian works in Chinese. He also made the first translation of Confucian texts into a European language, Latin. In 1601, Ricci became the first foreigner from the West to enter the Forbidden City, and was granted permission to establish a mission in Peking. In addition to establishing Christianity in China, he showed Chinese scholars that foreign countries were not barbaric. He also disseminated Western ideas to a Korean emissary, Yi Su-gwang, who later helped shape the foundation of the Silhak movement in Korea.

Xu collaborated with Matteo Ricci on the translation of several classic Western texts into Chinese, as well as several Chinese Confucian texts into Latin. Xu Guang-qi became the first native of China to publish translations of European books into Chinese. Together, Xu and Ricci translated books on mathematics, hydraulics, and geography. In 1607, they translated the first six books of Euclid’s Elements, using the Latin commentary on Euclid's Elements first published by Clavius in 1574. Ricci would explain the contents of the original text to Xu Guang-qi, who would then write down what he understood. Chinese scholars credit Xu as having "started China's enlightenment."

The approach to mathematics in these books must have seemed totally alien to Chinese readers, whose traditional approach to mathematics had been highly practical. To try to fit the Elements into that tradition, Xu Guang-qi explained in his preface how the contents could be applied to the problem of the calendar, to music and to technology. Xu Guang-qi wrote in the foreword to the translation:

The new Chinese terminology which Xu Guang-qi had to invent for unfamiliar terms such as “point,” “curve,” “parallel line,” “acute angle,” and “obtuse angle” soon became part of Chinese mathematics, as did the style of the geometric figures, in particular the characters Xu Guang-qi chose to label them. Ricci's influence led to Xu being baptized as a Roman Catholic in 1603, under the name "Paul Xu Guangqi." His descendants remained staunchly Catholic into the nineteenth century.

In 1616, the magistrate Shen Que of Nanjing wrote to Emperor Wan Li accusing the Jesuits of harboring wrong motives in China, and requesting their expulsion, Xu wrote a beautifully crafted, lengthy letter in their defense which became classic reading for Chinese Catholics. He stated the Jesuits were "the disciples of the holy sage, their way is right, discipline strict, knowledge vast, understanding deep, hearts pure, opinion firm, and in their own country, they excelled above most people." He noted that the doctrine of the Catholic religion they preached has "serving God as its foundation, saving souls as its goal, practicing love and kindness as its method, changing evil to good as its way, repentance as its discipline, blessing in heaven as the reward of doing good, eternal punishment in hell for doing evil, that all their teaching and precepts are the best according to both the principle of heaven and humankind, helping people to do good and shun evil with sincerity." Xu also suggested how the missionaries might be accommodated, and how the Chinese magistrates should govern them. Xu's brief received the imperial stamp, "Noted." No action was taken by Emperor Wan Li following the submission of Shen Que's first brief. Eventually, four of the thirteen Jesuit missionaries in various localities were deported to Macau, but nine were able to remain, mainly because of their defense by Xu, Li Zhizao, and Yang Tingjun.[1]

The Ming Dynasty government wanted to conduct a reform of their calendar, and reorganize the Imperial Astronomical Bureau and the Imperial Calendar Bureau. At that time, there were three schools of astronomy in China, the traditional Chinese (or Ta-t'ung), Islamic astronomers, and the New Method School led by Xu Guang-qi, which used the methods taught by the Jesuits. The New Method School had accurately predicted an eclipse which took place on December 15, 1610. To decide who should be responsible for reforming the calendar, the government held a competition to see which group could predict most accurately the timing of the next solar eclipse. Xu Guangqi’s group gave the most accurate prediction of the solar eclipse of June 21, 1629, and Xu was appointed to a high ministerial position. Four European Jesuits assisted Xu Guang-qi. The reform, which constituted the first major collaboration between scientists from Europe and from the Far East, had not been completed on his death in 1633 and was taken over by Li Tang-jing.

Xu Guangqi wrote the Nong Zheng Quan Shu, an outstanding agricultural treatise that followed in the tradition of those such as Wang Zhen (wrote the Wang Zhen Nong Shu of 1313 C.E.) and Jia Sixia (wrote the Chi Min Yao Shu of 535 C.E.).[3] Like Wang Zhen, Xu lived in troubled times, and was devoted as a patriot to aiding the rural farmers of China.[4] His main interests were in irrigation, fertilizers, famine relief, economic crops, and empirical observation with early notions of chemistry.[4] It was an enormous written work, some 700,000 written Chinese characters, making it seven times as large as the work of both Jia Sixia and Wang Zhen. Although its final draft was unfinished by Xu Guangqi by the time of his death in 1633, the famous Jiangnan scholar Chen Zilung assembled a group of scholars to edit the draft, publishing it in 1639.

The topics covered by his book are as follows:[5]