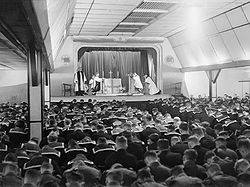 William Temple (October 15, 1881 – October 26, 1944) was the 98th Archbishop of Canterbury (1942–1944), the second son of Archbishop Frederick Temple (1821-1902). He was educated at Rugby School and Balliol College, University of Oxford, and in 1932-1933, he gave the Gifford Lectures. A renowned teacher and preacher, he is perhaps best known for his 1942 book, Christianity and Social Order, which set out an Anglican social theology and a vision for what would constitute a just post-war society.

This influenced the development of the Welfare State, a concept popularized by Temple, under Clement Attlee. Temple was probably the most accomplished scholar to lead the English church since Anselm of Canterbury. Also in 1942, with Chief Rabbi Joseph Hertz, Temple jointly founded the Council of Christians and Jews to combat anti-Jewish bigotry. Temple was equally committed to Christian unity and was one of the leaders of the ecumenical movement that, after his death, established the World Council of Churches. However, he lived to see the formation of the British Council of Churches in 1942, of which he was the first President. Most influential for his social teaching, Temple proposed a transformational theology that called for action in the world, in God’s name, not merely for the adoration of that name within the church. He favored social change that brought human equality closer and once said that "It is a great mistake to suppose that God is only, or even chiefly, concerned with religion."[1]

Temple’s father served as Bishop of London, then as Archbishop of Canterbury (1896-1902). From childhood, Temple suffered from gout and from bad eyesight. By the age of forty, he was blind in his right eye. After attending Rugby School, Temple entered Balliol College, University of Oxford, graduating with first class honors in classics, ancient history and philosophy in 1904. At Oxford, he was President of the Oxford Union, an honor he shares with many British Prime Ministers. An application for ordination was initially turned down by the Archbishop of Canterbury on the grounds that his belief in the Virgin Birth and Resurrection were unconventional.

Between 1907 and 1910, Temple tutored at Queen’s College, Oxford. Already interested in promoting human welfare, he became President of the Workers’ Education Association in 1908, a position he held until 1924. The Worker’s Education Association was in part inspired by the educational philosophy of Frederick Denison Maurice, the pioneer of Christian Socialism and perhaps the Anglican theologian whose reputation comes closest to Temple’s own. It aims to make education the property of all people, not only of a privileged few. He also joined the Labour Party. From this time on, Temple’s theology had a practical element, aiming to make the world more just, peaceful, and equitable. The incarnation—God taking on human flesh—was a central motif. By so doing, God consecrated the whole of life. In 1910, he acted as a steward at the Edinburgh International Missionary Conference, the first major ecumenical gathering of the modern era. By 1909, the Archbishop was convinced that Temple’s theology was beginning to conform in certain sensitive doctrinal areas, and he was ordained deacon. By 1910, he was an Anglican priest. From 1910 until 1914, Temple was headmaster of Repton School, then became rector if St. James, Picadilly (London), a prestigious appointment that was soon followed by a Canonry at Westminster Abbey.

Temple married Frances Anson in 1916. They did not have any children.

By 1921, Temple was Bishop of Manchester, an industrial city that was ideal for the practical application of his social thought. By this time, he had published Mens Creatrix (London: Macmillan, 1917), had presented the Bishop Paddock lectures in New York’s General Theological Seminary and had thrown himself behind the call for more self-governance within the Church of England that resulted in the creation of the Church Assembly (with lay delegates) in 1919. He was set to be a scholar bishop in the classical mold but one whose concerns were always practical, not merely theoretically, perhaps surprising given his own privileged upbringing. He was "born into the very heart of the establishment”[2] By 1929, he was Archbishop of York, the second most senior post in the Church of England. He was the youngest incumbent. As scholarly books followed, his reputation increased but so did his popularity among the general public, largely due to his unremitting support for social equality, fair wages, and welfare reforms. He once annoyed the Chancellor of the Exchequer by suggesting that a budget surplus should be given to the unemployed, not used to fund a tax reduction.[3] Temple saw work as a right, without which people suffered a lack of dignity and self-respect. In 1932-3 he delivered the prestigious Gifford Lecture.

In 1942, he followed his father as Primate of England, and spiritual head of the worldwide Anglican Community of some 40,000,000 members.

Temple’s health soon declined. In the final years of his life, he worked to aid Jewish refugees, and supported a negotiated end to the war, opposing the dominant view that demanded an unconditional surrender. At his last public appearance, a clergy retreat, to which he had been taken by ambulance, he spoke “standing on his one good foot”[4]—the other was incapacitated by gout.

He died on October 26, 1944. He was cremated at Charing Crematorium, Kent the first Primate of All England to be cremated. This had an immense effect on opinion throughout the whole Anglican community worldwide. His ashes were buried under a large stone in the cloister garden of Canterbury Cathedral, close to his father's grave.

Temple defended the working-class movement and supported economic and social reforms. In his Christianity and Social Order (1942) (to which Prime Minister Edward Heath wrote a foreword for a later edition) he set out six propositions for a Christian society:

Temple's support for the welfare state suggests that he believed the responsibility for creating a just society was shared between Church and society. Temple's vision of a post-war society influenced William Beveridge, whose 1942 Beveridge Report led to the establishment of the Welfare State in 1945.[5]

His theology, that saw a thin line between church and the world and which could hear God’s voice speak through nature and the world of work, lost popularity as World War II broke out. Many found Barthian theology, with its clear distinction between revelation, and natural theology (which he rejected because Hitler could be understood as a voice of God) more attractive.

Temple continued to reform the administration and governance of the Church of England, Chairing the 1941 Malvern Conference, which expressed the church’s concern for the “common good” as “Freedom, fellowship and service.” He wanted even greater freedom from the State, but did not live to see this. The Malvern conference also took the notion of “corporate sin” seriously, a notion that can be traced to Richard Niebuhr and Walter Rauschenbusch. Temple was also deeply moved by worship, and often led small retreats. He was also popular as a preacher. In addition to his theological texts, he wrote a popular book on St. John’s gospel. Temple’s greatest hour may have been leading worship at the Oxford Mission of 1931, when 3,000 students whispered the word, “when I survey the wondrous cross," having been challenged by Temple, "Now," he said, "if you mean them with all your heart, sing them as loud as you can. If you don't mean them at all, keep silent. If you mean them even a little and want to mean them more, sing them very softly."[4]

Having attended the Edinburgh Missionary Conference in 1910, as a steward, Temple took part in almost every significant ecumenical gathering from then until his own death. He participated in the Lausanne meeting of the Faith and Order commission in 1927, and the following year, at the Jerusalem International Missionary Conference, he drafted the statement of the conference. He chaired the Edinburgh Faith and Order Conference in 1937, when the motion to merge with the Faith and Action commission and to form the World Council of Churches was passed by 122 votes to 19. In 1938, when the provisional steering committee first met at Utrecht, Temple was elected Chairman. He strongly supported the negotiations between various Christian traditions in South India that led to the creation of the united Church of South India, which brought Methodists, Presbyterians and Anglicans together.

Temple is widely regarded as the most brilliant Archbishop of Canterbury since St. Anselm of Canterbury and, alongside Frederick Denison Maurice, as one of its most eminent theological thinkers. Winston Churchill paid him tribute as “a sixpenny article in a penny bazaar.”[6] One of his more famous sayings is that: "The Church is the only society that exists for the benefit of those who are not its members."[7] Institutions named for him include the William Temple Foundation, Manchester and the William Temple Episcopal Center, Galveston, TX.

Anglicans around the world celebrate his feast day on October 26. Born to privilege, despite ill health, not only his heart but also his hands, and his best efforts reached out to those who were less advantaged, due to no fault of their own.