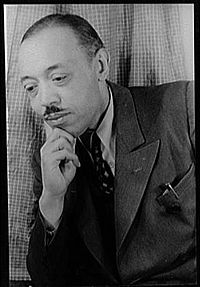 Still worked in a conventional tonal musical syntax and possessed a reactionary attitude towards the mathematical, formulaic music of the Second Viennese School. He believed that the emphasis on the intellectualizing of composition belied the essence of musical expression stating that in music of this style "intellect usually took precedence over the emotions, and while intellect is necessary to musical creation, it should be no more than subordinate to inspiration."

Still was very much of the attitude that "inspired" music, music born out of emotion and heart, was an important measure of beauty and value in musical composition.

William Grant Still was born in Woodville, Mississippi. His parents were both teachers and musicians. They were of mixed origin: African-American, Native American, Spanish and Anglo (Scotch-Irish). His father died when William was a few months old and his mother took him to Little Rock, Arkansas where she taught high school English. He grew up in Little Rock and took violin lessons there.

He then attended Wilberforce University, founded as an African-American school, in Ohio. He conducted the university band, learned to play various instruments and started to compose and to orchestrate. He also studied at the Oberlin Conservatory of Music on scholarship. He later studied at the New England Conservatory again on scholarship, and then with the ultra-modern composer, Edgard Varese.

He was the first African-American to have an opera performed on national television. Additionally, he was the Recording Manager of the Black Swan Phonograph Company. In the 1930s Still worked as an arranger of popular music, writing for Willard Robison's "Deep River Hour," and Paul Whiteman's "Old Gold Show," both popular NBC Radio broadcasts.

Still eventually moved to Los Angeles, California, where he arranged music for films. These included Pennies from Heaven (the 1936 film starring Bing Crosby and Madge Evans) and Lost Horizon (the 1937 film starring Ronald Colman, Jane Wyatt and Sam Jaffe). For Lost Horizon he arranged the music of Dimitri Tiomkin. Still was also hired to arrange the music for the 1943 film Stormy Weather but left the assignment after a few weeks due to artistic disagreements.

Still married Verna Arvey, a journalist and concert pianist, in 1939. They remained together until he died of heart failure in Los Angeles, California in 1978.

The piece of music for which Still is best remembered for is his Symphony No. 1 "Afro-American". (See the preceding link for a detailed discussion.) The symphony is in four movements. It combines themes from blues music with a symphonic dimension and meticulous orchestration. Still was influenced by the great jazz musicians of his day and, in particular, by W.C. Handy, the "Father of the Blues." The sound of the blues opens the symphony. Still and George Gershwin knew each other's music. There is a quote from Gershwin's I Got Rhythm in the third movement. Classics Today praised the symphony as "a "highly original, thought-provoking, and ultimately enjoyable creation."[1]

The influence of jazz and popular music is highly evident in Still's music due to his having performed in jazz ensembles in New York. At an early stage in his career and as a composer, he expressed his disdain for the crabbed mannerisms of serialism and dodecaphonic writing.

Other significant works include his four other symphonies and four folk suites for various instruments. Many of his works are based on Afro-American themes including And they Lynched Him On a Tree, A Bayou Legend, and In Memoriam: The Colored Soldiers Who Died for Democracy.