Walter Hubert Annenberg (March 13, 1908 – October 1, 2002) was an American billionaire publisher, diplomat, and philanthropist. He inherited the successful newspaper publishing business established by his father, Moses Annenberg, as well as his fortune, although both were tainted by his father's illegal activities. Walter Annenberg revived and expanded both the business and the fortune, establishing the highly successful niche magazines TV Guide and Seventeen. He served as ambassador to the United Kingdom for five years, during which time he received a knighthood. Before his death, Annenberg dedicated his wealth to philanthropy and founded the Annenberg Foundation, famous for its support of numerous educational institutions and programs. Despite the self-centered beginning to his life, Annenberg achieved great success, not only in terms of personal success in business and wealth, but also in serving his country and society in general through his philanthropic work.

Annenberg was born on March 13, 1908 in Milwaukee, Wisconsin, to Sarah and Moses "Moe" Annenberg. Moe Annenberg was a Prussian Jew who was brought with his family through Ellis Island to begin a life in the United States. Beginning his career as a newspaper salesman for the Hearst Corporation, Moe Annenberg eventually built a fortune and successful publishing company called Triangle Publications, Inc, which published The Philadelphia Enquirer, the Morning Telegraph, and the horse-racing publication Daily Racing Form.

Only son Walter Annenberg attended high school at the Peddie School in Hightstown, New Jersey, graduating in 1927. He attended college at the Wharton School of the University of Pennsylvania, graduating in 1931. During this time Annenberg lived a life of spoiled luxury, enjoying his father's success.

However, Moe's fortunes waned when, during the Roosevelt administration (to which his papers had been less than kind), he was indicted for income tax evasion and, after pleading guilty, was sentenced to three years in prison. His health failed during that time, and he died shortly after his release.

When his father died, Walter Annenberg took over the business, reinvigorating the newspapers and starting the extremely successful TV Guide and Seventeen magazines. Through their success he greatly increased his family fortune.

He married Veronica Dunkelman in 1938. The marriage failed in 1949 after 11 years. His only son, Roger, committed suicide in 1962. Harvard University, where Roger was a student at the time, established the Roger Annenberg Hall in his honor. Walter's marriage to his second wife, Leonore "Lee" Rosentiel, was, by all accounts, a lasting and fulfilling relationship.

Annenberg led a lavish lifestyle, enjoying his riches. His "Sunnylands" winter estate in California near Palm Springs hosted gatherings with such people as Ronald Reagan, Frank Sinatra, Bob Hope, Bing Crosby, and Charles, Prince of Wales. It was Annenberg who introduced Reagan to Margaret Thatcher, and the Reagans often celebrated New Year's Eve with the Annenbergs.

Even while an active businessman, Annenberg had an interest in public service. Richard Nixon appointed him ambassador to the Court of St. James's in the United Kingdom in 1969, and he became quite popular there, eventually receiving a knighthood. His wife Lee was named by President Ronald Reagan as the State Department's chief of protocol.

In the latter decades of his life, Annenberg was known for his philanthropy. He donated his magnificent collection of impressionist art as well as large amounts of money to support education. Through these efforts, Annenberg was able to restore the honor to his family name.

Annenberg died at his home in Wynnewood, Pennsylvania, in October 2002, at the age of 94. He was survived by his wife Lee, daughter Wallis, and two sisters, Enid Haupt and Evelyn Hall. Including those by his wife's daughters from her first marriage (Diane Deshong and Elizabeth Kabler), he left behind seven grandchildren and six great-grandchildren.[1] 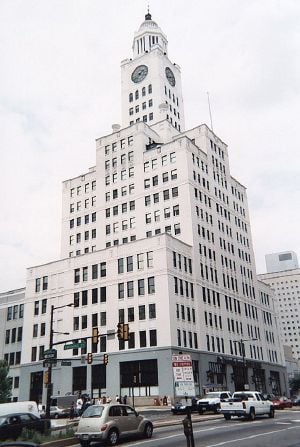 The Inquirer-Daily News Building on North Broad Street in Philadelphia.

Upon Moses Annenberg's death, Walter Annenberg, at age 32 a spoiled playboy, took over the family business, which had been enormously successful but was then stained by his father's illegal lifestyle. Walter Annenberg realized that not only the success of the business and his lavish lifestyle but also his family honor had been entrusted to his care, and invested his energy and insight into the task.

His biggest success was the creation of TV Guide, which he started against the advice of his financial advisors. He also created and made a fortune from Seventeen magazine. These publications continue to hold a prominent place in the American media, catering to the large niche audiences of television viewers and teenage girls.

While he ran his publishing empire as a business, Annenberg was not afraid to use it for his own agenda. The Philadelphia Inquirer was influential in ridding Philadelphia of its corrupt city government in 1949. It also attacked Senator Joseph McCarthy in the 1950s, when most other publications feared McCarthy. The Enquirer campaigned for the Marshall Plan after World War II.

Annenberg also made many enemies: activist Ralph Nader, actress Zsa Zsa Gabor, boxer Sonny Liston, and many politicians became "non-existent" in his newspapers. Their names were never mentioned, and they were even air-brushed out of group photographs.[2] In 1966, Annenberg used the pages of The Inquirer to cast doubt on the candidacy of Democrat Milton Shapp in the election for governor of Pennsylvania. Shapp was highly critical of the proposed merger of the Pennsylvania Railroad with the New York Central and was pushing the U.S. Interstate Commerce Commission to prevent it. Annenberg, a significant shareholder of the Pennsylvania Railroad, wanted to see the merger go through. Unfavorable press coverage of Shapp, including presenting false charges of a stay in a mental asylum and Shapp's subsequent denial, contributed to his election defeat by Raymond P. Shaffer.[2]

After Richard Nixon appointed him as ambassador to the United Kingdom, Annenberg sold The Inquirer and the Philadelphia Daily News to Knight Newspapers for $55 million.

Annenberg purchased numerous regional television listing publications such as TV List, TV Forecast, TV Digest, and Television Guide to launch the TV Guide as a national publication in 1953. Thanks to Annenberg's vision, this publication became an almost instant success, becoming the most read and circulated magazine in the country by the 1960s. In addition to subscriptions, TV Guide was a weekly selection from its familiar rack at grocery store check-out counters nationwide; into the 1970s, each week's features were promoted in a television commercial.

TV Guide was first based in a small office in downtown Philadelphia until moving to more spacious national headquarters in Radnor, Pennsylvania in the late 1950s. The new facility, complete with a large lighted TV Guide logo at the building's entrance, was home to management, editors, production personnel, and subscription processors, as well as a vast computer system holding data on every show and movie available for listing in the popular weekly publication. Printing of the national color section of TV Guide took place at Triangle's Gravure Division plant adjacent to Triangle's landmark Philadelphia Inquirer Building on North Broad Street in Philadelphia. The color section was then sent to regional printers to be wrapped around the local listing sections. Triangle's Gravure Division was known for performing some of the highest quality printing in the industry with almost always perfect registration.

Under the ownership of Annenberg's Triangle Publications, TV Guide continued to grow not only in circulation, but in recognition as the authority on television programming, as it contained not only program listings but also articles from both staff and contributing writers.

Annenberg founded Seventeen magazine in 1944. He astutely realized the lack of publications targeted at the teenage group in America and created Seventeen in response. Its content included articles on fashion, which stores to look for the latest trends, on celebrities, beauty features that included how to take care of your skin, different hair styles, and make-up wearing advice, lifestyle advice, a nutrition section that included healthy foods to eat and how to maintain your weight, a sex and body section, and horoscopes. It also included quizzes concerning the reader's personality and love life.

Under Annenberg's direction, its tone was light and positive. The article length was kept deliberately brief, high quality photographs emphasized regular celebrity and clothing themes, and it was well supported by advertising keen to reach the big-spending demographic of young women. Initially focused on white teens, later editors consciously broadened its content. Seventeen is considered by many to be the most popular magazine for teenage girls, despite facing growing competition.

The magazine remained in Annenberg's control for many decades through Triangle Publications, until he sold the group to Rupert Murdoch. The poor performance of Murdoch's Primedia Company prompted the subsequent sale of Seventeen magazine for $182.4 million to The Hearst Corporation, founded by William Randolph Hearst and one of the world's largest media conglomerates.

I believe in social responsibility. A man's service to others must be at least in ratio to the character of his own success in life. When one is fortunate enough to gain a measure of material well being, however small, service to others should be uppermost in his mind.

In 1989, he created the Annenberg Foundation. In 1993, he created the Annenberg Challenge, a $500 million, five-year reform effort and the largest single gift ever made to American public education. After the 1998 sale of TV Guide, Seventeen, and other publications to Australian publishing magnate Rupert Murdoch for $3 billion, Annenberg announced that he would devote the rest of his life to philanthropy. The Annenberg Foundation gave away significant amounts of money, mostly to educational institutions.

The Annenberg Foundation was established with the mission to "advance the public well-being through improved communication."[4] To achieve this goal, the foundation encourages the development of more effective ways to share ideas and knowledge. Annenberg Media was created through a gift from Walter Annenberg, and is the arm of the Annenberg Foundation that is dedicated to the improvement of teaching by funding development and distribution of multimedia educational resources through a variety of channels.

In addition to distributing the media directly to educational institutions and community agencies, the organization airs the programs on the Annenberg Channel — a free digital satellite channel — and makes its complete video collection available for no cost through broadband access to its web site, along with related activities and guides. Many of its programs are aired on PBS stations around the United States.

Annenberg embodied the traditional capitalist philosophy articulated by Andrew Carnegie that a man should spend the first half of his life making his fortune and the second half giving it away. It can be argued that men should never be allowed to become this rich, but rather that they should be more heavily taxed to support the government. Others argue that this form of philanthropy is more direct and efficient than any government programs could be.

Annenberg said, "Few things are as essential as education."[5] Many school buildings, libraries, theaters, hospitals, andmuseums all over the United States bear Annenberg's name. It is estimated that he gave over $2 billion in his lifetime.[6] His collection of French impressionist art was valued at approximately $1 billion and has been donated to the Metropolitan Museum of Art in New York City.[7]

Retrieved from https://www.newworldencyclopedia.org/p/index.php?title=Walter_Annenberg&oldid=1037008
Categories:
Hidden category:
This page was last edited on 10 May 2020, at 21:26.
Content is available under Creative Commons Attribution/Share-Alike License; additional terms may apply. See Terms of Use for details.