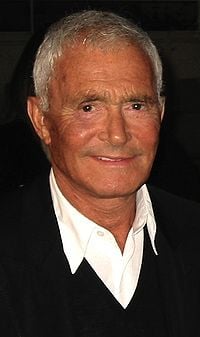 Vidal Sassoon, CBE (January 17, 1928 – May 9, 2012) was a British hairdresser, credited with creating a simple geometric, "Bauhaus-inspired" hair style, also called the wedge bob. He was also the first stylist to allow his name to be used on hair products and salons.

Known as a craftsman who "changed the world with a pair of scissors," Vidal Sassoon created a revolution in hair styling. His styles allowed women to be free from the lengthy process of curling, teasing, and heavy use of hairspray that was standard at salons; instead, his wash-and-wear styles produced cuts that required little styling, simply falling perfectly into place.

In the mid-twentieth century, Western women were taking on a new role in society through careers outside the home, and Sassoon's creative advances in hair styles were supportive of this changing lifestyle. Thus, his contribution to society was not just artistic, in the form of a new fashion, but also had a practical component, supporting advances in human society.

Vidal Sassoon was born on January 17, 1928 Hammersmith, London, and lived in Shepherd's Bush. His parents were Sephardi Jews.[1] His mother, Betty (Bellin), came from a family of Jewish immigrants from Spain, and his father, Jack Sassoon, was from Thessaloniki, Greece. Sassoon had a younger brother, Ivor, who died at the age of 46.[1]

His father left the family when Vidal was three years old.[2] Due to poverty as a single parent, his mother placed Sassoon and his brother in a Jewish orphanage, where they stayed for seven years.[3] His mother remarried in 1940 and he and his brother left the orphanage to live as a family with her and their step-father, Nathan Goldberg.[4]

Sassoon attended Essendine Road Primary School, a Christian school, before being evacuated due to World War II to Holt, Wiltshire. After his return to London he left school at the age of 14 and began a hairdressing apprenticeship under Adolph Cohen, at the suggestion of his mother, although his own interests were in architecture, football, and politics.

At the age of 17, despite having been too young to serve in World War II, he became the youngest member of the 43 Group, a Jewish veterans' underground organization. It broke up what it considered Fascist meetings in East London in order to prevent Sir Oswald Mosley's movement from spreading "messages of hatred" in the period following World War II.[5]

In 1948, at the age of 20, he joined the Haganah (which shortly afterwards became the Israeli Defence Forces) and fought in the 1948 Arab–Israeli War after Israel declared statehood.[6]

Sassoon married his first wife, Elaine Wood, in 1956; the marriage ended in 1958. In 1967, he married his second wife, actress Beverly Adams. They had three children: two daughters, Catya (1968–2002), an actress who died from a drug-induced heart attack, Eden (born 1973), and a son, Elan (born 1970); and adopted a fourth, David.[3] Sassoon and Adams divorced in 1980. His third wife was Jeanette Hartford-Davis, a dressage champion and former fashion model; they married in 1983 and divorced soon after. In 1992 he married designer Ronnie (Rhonda) Holbrook, with whom he lived happily in Los Angeles, California, until his death 20 years later.[7]

Sassoon had moved to Los Angeles in the early 1970s, looking for a chemist to formulate his hair-care products, and had decided to move there permanently. After his stepfather died, he moved his mother to Los Angeles, where she enjoyed the rest of her life, attending parties given by her son and mixing with Hollywood celebrities.[2] Nevertheless, Sassoon remained true to his British roots, continuing to support the Chelsea football team his whole life.[8]

Sassoon was appointed Commander of the Order of the British Empire (CBE) in the 2009 Birthday Honours.

In June 2011 it was reported that Sassoon had been diagnosed with leukemia two years earlier, and was receiving treatment in Beverly Hills and London.[9] He died on May 9, 2012 at his home in Los Angeles, with his family at his side.[10]

After his apprenticeship with Adolph Cohen, Sassoon trained under Raymond Bessone, an old style hairdresser who believed in repeated teasing and backcombing and was known as Mr Teasy-Weasy, in his Mayfair salon: "he really taught me how to cut hair...I'd never have achieved what I have without him."[11] Sassoon opened his first salon in 1954 in London.

Sassoon designed new, more efficient, hair styles: "If I was going to be in hairdressing, I wanted to change things. I wanted to eliminate the superfluous and get down to the basic angles of cut and shape."[12] Sassoon's styles include the geometric perm and the "Nancy Kwan" bob cut hairstyles. They were all modern and low-maintenance. His hairstyles relied on straight and shiny hair cut into geometric yet organic shapes. In 1963, Sassoon created a short, angular hairstyle cut on a horizontal plane that was the recreation of the classic "bob cut." His geometric haircuts seemed to be severely cut, but were entirely lacquer-free, relying on the natural shine of the hair for effect.

He became hairdresser to a variety of famous people, including clothes designer Mary Quant whose miniskirt designs were perfectly balanced by his "five-point" bob haircut, and actress Mia Farrow whose urchin cut was made famous in her leading role in Roman Polanski's movie Rosemary's Baby.[13] Due to the popularity of his styles, Sassoon was described as "a rock star, an artist, [and] a craftsman who 'changed the world with a pair of scissors.'"[8] 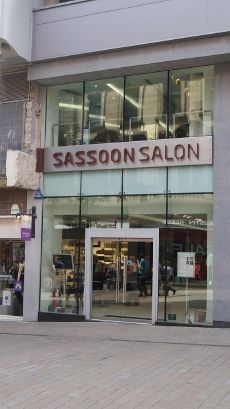 Sassoon's "wash and wear" philosophy liberated women from the "tyranny of the salon" and "revolutionized the art of hairstyling."[12] His styles became "emblematic of freedom and good health" and their popularity allowed him to open the first chain of worldwide hair styling salons, complemented by his hair-treatment products.[14]

He also established Vidal Sassoon Academies to teach stylists how to envision haircuts based on their clients' bone structure. By 2006 there were academies in England, the United States, and Canada, and additional locations were planned in Germany and China.

After moving to the United States, Sassoon sold his $113 million-a-year company in 1983 to Richardson-Vicks. The company was bought by Procter & Gamble in 1985, who began applying his name to shampoos and conditioners sold worldwide, with a commercial campaign featuring the iconic slogan "If you don't look good, we don't look good." Sassoon sued Procter & Gamble in 2003 for breach of contract and fraud in federal court for apparently neglecting the marketing of his brand name in favor of the company's other hair product lines. The two parties settled the matter the following year.[15]

Former salon colleagues bought Sassoon's salons and the right to use his name, further extending his brand in salons throughout the U.K. and U.S.[8]

In 1982, Sassoon started the Vidal Sassoon International Center for the Study of Antisemitism, or SICSA, an interdisciplinary research center devoted to the non-political, interdisciplinary gathering of information about antisemitism. It is affiliated with the Hebrew University of Jerusalem.[16]

Sassoon worked on many philanthropic causes, such as the Boys Clubs of America and the Performing Arts Council of the Music Center of Los Angeles, through his Vidal Sassoon Foundation.[10] His foundation also provided support for educational pursuits on a need-basis in Israel and elsewhere.[15] He was also active in supporting relief efforts after Hurricane Katrina.[8]

Vidal Sassoon died on May 9, 2012, at his home in Los Angeles. His family issued the following statement:

It is with great sadness that we announce the passing of Vidal Sassoon CBE, who died this morning at his home in Los Angeles surrounded by loved ones. The 84-year-old hairdresser was born in 1928 and sadly lost his battle with leukaemia today. He became the most celebrated hairdresser in the world having begun his career as an apprentice during the Second World War, going on to revolutionise an industry through his iconic haircuts, salons, schools and product lines. He will be greatly missed by his wife of 20 years Ronnie, his children, grandchildren, family and friends.[10]

Reactions to his death included Neil Cornelius, the incumbent owner of Sassoon's first solo venture, who said that his death was the loss of a "hairdressing legend. It is very, very sad because I grew up in the East End like Vidal and from the age of 11 I wanted to be a hairdresser like Vidal. I remember the first time I met him. I have washed the hair of Princess Diana, I have met Nelson Mandela, but meeting Vidal Sassoon topped all of those. I know it sounds crazy but I could not sleep [before] the first time I met him. He was a hairdressing legend."[10]

Other celebrity hairstylists also commented on his death. Lee Stafford noted that "Sassoon revolutionized the way everybody wears their hair today, he also made British hairdressing the best in the world, he was my hero." Oscar Blandi credited Sassoon for showing him the "true art of styling. ... He truly changed the world of hair and beauty. He was definitely the most innovative person ever to enter the industry. He led the way for the celebrity stylists of today."[8]

he changed the way everyone looked at hair. Before Sassoon, it was all back-combing and lacquer; the whole thing was to make it high and artificial. Suddenly you could put your fingers through your hair! He didn’t create [Sassoon's five-point cut] for me; he created it on me. It was an extraordinary cut; no one has bettered it since. And it liberated everyone. You could just sort of drip-dry it and shake it.[4]

John Barrett of the John Barrett Salon at Bergdorf Goodman commented that Sassoon "was the creator of sensual hair. This was somebody who changed our industry entirely, not just from the point of view of cutting hair but actually turning it into a business. He was one of the first who had a product line bought out by a major corporation.[4]

Vidal Sassoon: The Movie, a documentary film about his life, was released in 2010.[12]

The Vidal Sassoon International Center for the Study of Antisemitism continues as an interdisciplinary research center devoted to the independent, non-political accumulation and dissemination of materials related to anti-Semitism.[16] Over 120 studies have been conducted under the auspices of the center, covering a wide range of disciplines—history, psychology, sociology, anthropology, literature and art. The Center awards Felix Posen Fellowships to doctoral candidates whose dissertation focuses on some aspect of anti-Semitism.[17]

Retrieved from https://www.newworldencyclopedia.org/p/index.php?title=Vidal_Sassoon&oldid=1036846
Categories:
Hidden category:
This page was last edited on 8 May 2020, at 20:23.
Content is available under Creative Commons Attribution/Share-Alike License; additional terms may apply. See Terms of Use for details.