Vasily Semyonovich Grossman (first name alternatively spelled as Vassily or Vasiliy, Russian: Василий Семёнович Гроссман) (December 12, 1905 – September 14, 1964), was a prominent Soviet-era writer and journalist. He began his career as a journalist and worked as a war reporter during the Great Patriotic War. Later he turned to fiction, but as he became more critical of the Soviet regime, his work ran into trouble with the authorities. He became an outspoken critic of totalitarianism, and his work could only be published outside the Soviet Union.

Born Iosif Solomonovich Grossman in Berdichev, Ukraine into an emancipated Jewish family, he did not receive a traditional Jewish education, and knew only a few Yiddish words. A Russian nanny turned his name Yossya into the Russian Vasya (a diminutive, or "nickname" of Vasily), which was accepted by the whole family. His father had social-democratic convictions and joined the Mensheviks. Young Vasily Grossman idealistically supported the Russian Revolution of 1917.

Grossman began writing short stories while studying at Moscow State University, later continuing his literary activity while working as an engineer in the Donbass region. One of his first short stories, In the town of Berdichev (В городе Бердичеве), drew favorable attention and encouragement from Maxim Gorky and Mikhail Bulgakov. The famous film Commissar (directed by Aleksandr Askoldov), made in 1967, suppressed by the KGB and released only in October 1990, is based on this four-page story.

In the mid-1930s Grossman left his job as an engineer and committed himself fully to writing. By 1936 he had published two collections of stories, and in 1937 was accepted into the privileged Writers Union of the USSR. During the Great Purges some of his friends and close relatives were arrested, including his common-law wife. For months he petitioned the authorities to release her, and she was finally released in 1938. 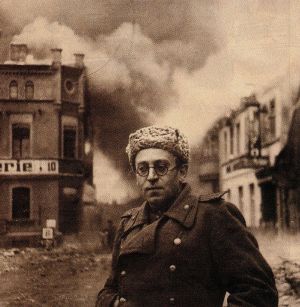 Vasily Grossman with the Red Army in Schwerin, Germany (1945).

When the Great Patriotic War broke out in 1941, his mother was trapped and eventually murdered in Berdichev, together with 20,000 to 30,000 other Jews who did not evacuate. Grossman was exempt from the army but volunteered for the front, where he spent more than 1,000 days. He became a war reporter for the popular Red Army newspaper Krasnaya Zvezda (The Red Star). As the war raged on, he covered its major events, including the Battle of Moscow, the Battle of Stalingrad, the Battle of Kursk, and the Battle of Berlin. In addition to war journalism, his novels (such as The People is Immortal (Народ бессмертен)) were being published in newspapers and he came to be regarded as a legendary war hero. The novel Stalingrad (1950), later renamed In Just Cause (За правое дело) is based on his own experiences during the siege.

Grossman's documentary descriptions of ethnically cleansed Ukraine and Poland, the opening of Treblinka and Majdanek extermination camps were some of the first eyewitness accounts—as early as 1943—of what later became known as the Holocaust. His article The Treblinka Hell,[1] (1944) was disseminated at the Nuremberg Trials as a document for the prosecution.

Conflict with the Soviet regime

The post-war state suppression of the Black Book shook him to the core and he began to question his own loyal support of the regime. First the censors ordered changes in the text to conceal the specifically anti-Jewish character of the atrocities and to downplay the role of Ukrainians who worked as Nazi police. Then in 1948 the Soviet edition of the book was scrapped completely. The poet Semyon Lipkin, his friend, believes it was Joseph Stalin's antisemitic campaign that cracked Grossman's belief in the Soviet system:

"In 1946... I met some close friends, an Ingush and a Balkar, whose families had been deported to Kazakhstan during the war. I told Grossman and he said: "Maybe it was necessary for military reasons." I said: "...Would you say that if they did it to the Jews?" He said that could never happen. Some years later, a virulent article against cosmopolitanism appeared in Pravda. Grossman sent me a note saying I had been right after all. For years Grossman didn't feel very Jewish. The campaign against cosmopolitanism reawoke his Jewishness."

Because of the state persecution, only a few of the author's post-war works were published during his lifetime. After he submitted for publication his magnum opus, the novel Life and Fate (Жизнь и судьба, 1959), the KGB raided his apartment. The manuscripts, carbon copies, notebooks, as well as the typists' copies and even the typewriter ribbons were seized.

With the post-Stalinist "Thaw period" underway, Grossman wrote to Nikita Khrushchev: "What is the point of me being physically free when the book I dedicated my life to is arrested... I am not renouncing it... I am requesting freedom for my book." The Politburo ideology chief Mikhail Suslov told the author that his book would not be published for at least two hundred years.

Life and Fate, as well as his last major novel Forever Flowing (Все течет, 1961) were considered a threat to the totalitarian regime, and the dissident writer was effectively transformed into a nonperson. Forever Flowing, in particular, is unique in its quiet, non-forced, and yet horrifying, condemnation of the Soviet totalitarian state, a work in which Grossman, liberated from worries about censors, spoke completely honestly about Soviet history. Grossman died in 1964, not knowing whether his novels would ever be read by the public.

Fate of Grossman's writings after his death

Life and Fate was published in 1980 in Switzerland, thanks to fellow dissidents; physicist Andrei Sakharov secretly photographed draft pages preserved by Semyon Lipkin, and the writer Vladimir Voinovich managed to smuggle the films abroad. As the policy of glasnost was initiated by Mikhail Gorbachev, the book was finally published on Russian soil in 1988. Forever Flowing was published in the Soviet Union in 1989.

Life and Fate is considered to be an autobiographical work. In his introduction to his English translation of the novel, Robert Chandler wrote that its leading character, Viktor Shtrum "is a portrait of the author himself," reflecting in particular his anguish at the murder of his mother at the Berdichev Ghetto. Chapter 18, a letter from Shtrum's mother, Alexandra, has been dramatized for the stage, and film, as The Last Letter (2002) directed by Frederick Wiseman starring Catherine Samie. Chandler additionally suggests that Shtrum is based on the physicist Lev Landau.

Some critics have compared Grossmans's novels to Leo Tolstoy's monumental prose.[2][3] However, it is just as possible to compare his work with that of Fyodor Dostoevsky, as Grossman is merciless in describing the dark corners of a human soul.