In this illustration from a seventeenth-century Icelandic manuscript, Heimdall is shown guarding the gate of Valhalla

Valhalla (Old Norse: Valhöll, "hall of the slain") is Odin's hall in Norse mythology, where it provides a posthumous home for those slain gloriously in battle. These warriors, known as einherjar, are welcomed by Bragi (the god of skaldic poetry) and are given a seat at any one of a multitude of tables, where they are plied with roasted boar and endless mead by the beautiful Valkyries. Each day, these deceased warriors exit the hall to do battle with each other, only to be regenerated at sundown, which allows them to feast through the night and fight again the next day. It should be noted, however, that this constant strife is not purposeless, as it can be seen as training for the role that the einherjar will play in fighting alongside the gods at Ragnarök.

It should be noted that "Valhalla" is a nineteenth-century English mistranslation of the singular Valhöll into a genitival plural form. While a more literally correct English translation would be "Val-hall," the term "Valhalla" has come into general use.

Valhalla in a Norse Context

As an important mythic locale, Valhalla belonged to a complex religious, mythological, and cosmological belief system shared by the Scandinavian and Germanic peoples. This mythological tradition developed in the period from the first manifestations of religious and material culture in approximately 1000 B.C.E. until the Christianization of the area, a process that occurred primarily from 900-1200 C.E.[1]

Within this framework, Norse cosmology postulates three separate "clans" of deities: the Aesir, the Vanir, and the Jotun. The distinction between Aesir and Vanir is relative, for the two are said to have made peace, exchanged hostages, intermarried, and reigned together after a prolonged war. In fact, the greatest divergence between the two groups is in their respective areas of influence, with the Aesir representing war and conquest, and the Vanir representing exploration, fertility, and wealth.[2] The Jotun, on the other hand, are seen as a generally malefic (though wise) race of giants who represented the primary adversaries of the Aesir and Vanir.

Further, their cosmological system postulated a universe divided into nine interrelated realms, some of which attracted considerably greater mythological attention. Of primary importance was the threefold separation of the universe into the realms of the gods (Asgard and Vanaheim, homes of the Aesir and Vanir, respectively), the realm of mortals (Midgard) and the frigid underworld (Niflheim), the realm of the dead. These three realms were supported by an enormous tree (Yggdrasil), with the realm of the gods ensconced among the upper branches, the realm of mortals approximately halfway up the tree (and surrounded by an impassable sea), and the underworld nestled among its roots. Valhalla, the feasting hall of the Aesir and the gathering place of the honored dead, was an important component of this overall cosmological picture. 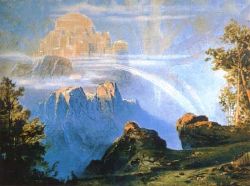 In the center of Asgard, the gods constructed a mighty hall (Valhalla), whose dimensions and characteristics made it a fitting testament to their own power and authority. The scale of the structure was truly massive, with over five hundred doors — each so wide that eight hundred men could walk through them abreast — and a roof whose peak was nearly lost in the clouds.[3] Its martial character was demonstrated by a peculiar choice of roofing materials:

When he came into the town, he saw there a hall so high that he could not easily make out the top of it: its thatching was laid with golden shields after the fashion of a shingled roof. So also says Thjódólfr of Hvin, that Valhall was thatched with shields:

On their backs they let beam, | sore battered with stones,
Odin's hall-shingles, | the shrewd sea-farers.[4]

The setting of the hall was also notable, as it was surrounded by a magical forest (Glasir), whose trees bore leaves of reddest gold,[5] and was ensconced by the raging waters of the river Thund ("the roaring"). The hall was also protected by Valgrind (the "Death-Gate"), a portal whose locks would only open for those chosen by the Valkyries.[6]

The most complete description of this fabled hall is found in Grimnismol, an Eddic poem dedicated to describing the dwelling-places of the Aesir:

Valhalla in Norse Soteriology and Eschatology

For the war-like Vikings (and other early Germanic peoples), Valhalla provided an undeniably appealing (though bloodthirsty) vision of the afterlife. It was the final resting place for those who died in battle, as the Norse believed that those who conducted themselves with bravery and honor were personally selected by the valkyries (literally "dead choosers") to take a place among the gods in Odin's hall. The All-Father's role in selecting the noble dead was demonstrated in the Norse funerary ceremonies, which are preserved in the Ynglinga Saga:

Once accepted into this afterlife, these elect (the einherjar ("lone fighters")) continued fighting, each day sallying forth into combat with each other, only to be healed (or resurrected) at the end of the day, which enabled them to fight again in the morrow. It is a testament to the martial nature of their culture that this was seen as an ideal realm.[9]

The heroes all | in Othin's hall
Each day to fight go forth;
They fell each other, | and fare from the fight
All healed full soon to sit.[10] 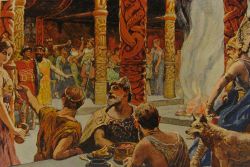 Walhall by Emil Doepler, 1905. Einherjar are served by Valkyries while Odin sits upon his throne

After a day of battle (and once all the injured and slain have been restored), they all return to the hall for a evening of reveling and merriment. Andhrimnir (the "Sooty-Faced" cook) prepares a meal from Sæhrimnir ("the Blackened"), a divine boar who provides nourishment for all the assembled mortals and gods, and then magically regenerates to allow them to feast again the following evening. The hall is also home to Heithrun, a magical goat who sups on the twigs of Yggdrasill and produces (instead of milk) udders full of the best mead.[11]</ref> As they feast, the einherjar are waited upon by the beautiful valkyries, who keep their plates full and their ale mugs constantly brimming.[12]

While the appeal of this afterlife can be appreciated (when adopting a culturally-relativistic perspective), it was not open to all people. Those who died at home were seen to be relegated to Niflheim, a frigid, shadowy afterlife where they were ruled over by Loki's daughter, the cruel Hel. Given the restrictiveness of the entrance criteria, it is perhaps not surprising that they became somewhat relaxed in Norse religious practice, where Valhalla was seen to be open to "men who show prowess at war and offer themselves up to Odin in their lives and dying acts."[13]

As much as the unending conflict described above would have been appealing to many Viking warriors on its own merits, it was not simply undertaken for this reason. Instead, the constant strife enjoyed by the einherjar could be seen as a training of sorts, preparing them to fight alongside Odin at the cataclysmic battle of Ragnarök.

As stated above, the primary role of the constant conflict in the fields surrounding Valhalla was to prepare the dead warriors to fight alongside the Aesir in the world-shattering, eschatological battle of Ragnarök. The surfeit of enormous doors that characterized the hall (described above) could be seen as a necessitated by the realities of this battle, as it would allow the near-endless torrent of deceased human warriors to join the struggle as quickly as possible.

Five hundred doors | and forty there are,
I ween, in Valhall's walls;
Eight hundred fighters | through one door fare
When to war with the wolf they go.[14]

However, their participation was not foreseen to be untroubled, as the hall itself was destined to be targeted for an attack by the souls of the dead who had been consigned to Niflheim. Fortunately, the thrust of their attack would be disrupted by the waters of the river "Thund," which surround the hall:

The destiny of the einherjar following this conflict is uncertain. Snorri Sturluson's Gylfaginning seems to imply that they will each have a place in Gimli (a heavenly realm of light), though this is assumed to be a later Christian accretion to the traditional Norse beliefs.[16] Regardless, after the demise of the existing order (including all of the einherjar and the first-generation Aesir), the storied walls of Valhalla still stand, presenting the new generation of gods with a dwelling place:

The "Hroptr" mentioned in this passage is simply an epithet for Odin, meaning "god" (or perhaps "tumult").[18] 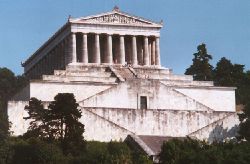 View of Walhalla from the Danube River.

In the early nineteenth century, King Ludwig I of Bavaria, inspired by the Germanic conception of Valhalla, ordered the construction of the Walhalla Temple, which was to be a place of honor for historically notable Germanic figures. The inspiring structure, located near Regensburg, Germany, remains an imposing edifice and continues to be a popular tourist attraction.

Retrieved from https://www.newworldencyclopedia.org/p/index.php?title=Valhalla&oldid=993326
Categories:
Hidden category:
This page was last edited on 14 January 2016, at 21:41.
Content is available under Creative Commons Attribution/Share-Alike License; additional terms may apply. See Terms of Use for details.