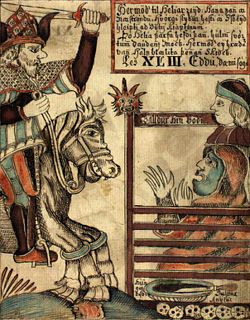 Hermóðr rides to Hel on Sleipnir. He meets Hel and Baldr.

The term Hel (meaning "to bury," and "grave") [1] [2] is used in Norse mythology to refer to both the realm of the dead and to its queen. As a realm, Hel is described as a cold, shadowy place, inhabited by the souls of individuals who died in a so-called 'cowardly manner' (i.e., not in battle). In this way, it can be seen as the polar opposite of Valhalla - Odin's hall of perpetual feasting, whose doors only open for those slain in conflict.[3]

As a deity, Hel is the overseer of this twilight realm. A daughter of Loki, she is cold, aloof and indifferent to the suffering of her constituents (as evidenced by her role in the saga of Balder's death, among others).

In some ways, Hel is similar to the Judeo-Christian idea of Gehenna (Hell) because both concepts can refer to a subterranean realm of punishment, albeit the Norse Hel is a cold place whereas the Gehenna of the Hebrew Bible is a hot, burning pit. As Christianity spread into northern Germanic and Scandinavian lands, the somewhat similar ideas of "Hel" and "Hell" fused together, and today, the word "Hell" in the English language comes from "Hel."

Hel in a Norse Context

As a both a Norse deity and a realm in the Norse mythic cosmos, Hel belonged to a complex religious, mythological and cosmological belief system shared by the Scandinavian and Germanic peoples. This mythological tradition, of which the Scandinavian (and particularly Icelandic) sub-groups are best preserved, developed in the period from the first manifestations of religious and material culture in approximately 1000 B.C.E. until the Christianization of the area, a process that occurred primarily from 900-1200 C.E..[4] The tales recorded within this mythological corpus tend to exemplify a unified cultural focus on physical prowess and military might.

Did you know?
In Norse Mythology "Hel" refers both to the cold realm inhabited by the dead who died not in battle and the cold deity who rules it

Within this framework, Norse cosmology postulates three separate "clans" of deities: the Aesir, the Vanir, and the Jotun. The distinction between Aesir and Vanir is relative, for the two are said to have made peace, exchanged hostages, intermarried, and reigned together after a prolonged war. In fact, the most major divergence between the two groups is in their respective areas of influence, with the Aesir representing war and conquest, and the Vanir representing exploration, fertility, and wealth.[5] The Jotun, on the other hand, are seen as a generally malefic (though wise) race of giants who represented the primary adversaries of the Aesir and Vanir.

Hel, whether understood as the goddess of the dead or the realm where their spirits reside, is a clear indication of the place of (non-battle-related) death within the Norse worldview, due to her predominantly negative characterization.

In Norse mythology, Hel (sometimes Anglicized or Latinized as Hela) is the queen of the Norse underworld. This word is the root of the English word hell. In the Prose Edda,[6] she is described as the daughter of Loki and Angrboða – a giantess – and thus sister of the Fenris wolf and Jörmungandr (the Midgard Serpent). Since her father is often described as a god, the same might be said of Hel. Her physical description in the Prose Edda reads:

She is half blue-black and half flesh-color (by which she is easily recognized), and very lowering and fierce.[7]

Within her great hall under the roots of Yggdrasill, Hel dwells in a realm of pain and misfortune, which is poetically described by the twelfth century Icelandic historian Snorri Sturluson:

Her walls are exceeding high and her gates great. Her hall is called Sleet-Cold; her dish, Hunger; Famine is her knife; Idler, her thrall; Sloven, her maidservant; Pit of Stumbling, her threshold, by which one enters; Disease, her bed; Gleaming Bale, her bed-hangings.[7]

As with many of the accounts providing elaborating details on Hel's character, the description of the Queen of the Underworld's birth is only found in Snorri's Prose Edda. Therein, it is revealed that:

Yet more children had Loki. Angrboda was the name of a certain giantess in Jötunheim, with whom Loki gat three children: one was Fenris-Wolf, the second Jörmungandr—that is the Midgard Serpent,—the third is Hel. But when the gods learned that this kindred was nourished in Jötunheim, and when the gods perceived by prophecy that from this kindred great misfortune should befall them; and since it seemed to all that there was great prospect of ill—(first from the mother's blood, and yet worse from the father's)—then Allfather sent gods thither to take the children and bring them to him. … Hel he cast into Niflheim, and gave to her power over nine worlds, to apportion all abodes among those that were sent to her: that is, men dead of sickness or of old age.[7]

In her role as the steward of the ignoble dead,[8] Hel plays a secondary part in numerous mythic tales. For instance, this conception plays into many of the mythic histories of the early Norse heroes and kings:

[Halfdan the Mild] was a great warrior, who had been long on Viking cruises, and had collected great property…. Holtar, in Westfold, was his chief house; and he died there on the bed of sickness, and was buried at Borre under a mound. So says Thjodolf:—

"By Hel's summons, a great king
Was called away to Odin's Thing:
King Halfdan, he who dwelt of late
At Holtar, must obey grim Fate.
At Borre, in the royal mound,
They laid the hero in the ground."[9]

Similarly, the Ynglinga Saga also contains a tale that Hel procured herself a spouse by having the Swedish king Dyggvi die a natural death (in spite of his fierce lifestyle):

"Dygve the Brave, the mighty king,
It is no hidden secret thing,
Has gone to meet a royal mate,
Riding upon the horse of Fate.
For Loke's daughter in her house
Of Yngve's race would have a spouse;
Therefore the fell-one snatched away
Brave Dygve from the light of day."[10]

However, the most famous of the accounts describing Hel's stewardship of the deceased is certainly the tale of Balder's untimely death. In it, Hermódr is dispatched by Odin to the realm of Hel to plead with its queen to return the beloved god to the realm of the living. The cold-hearted ruler replied that "in this wise it should be put to the test, whether Baldr were so all-beloved as had been said: 'If all things in the world, quick and dead, weep for him, then he shall go back to the Æsir; but he shall remain with Hel if any gainsay it or will not weep.'"[11] In the end, a single giantess refuses to shed a tear for the lost god, and this is sufficient for Hel to retain her hold on him.

It has been suggested that this description of Hel is of later date, and that she originally was a much more neutral goddess over the realm of shadows, where all, both good and evil, courageous and cowardly, gather after death. This can be seen as being supported by the etymology of Hel (Lat. Celāre, Ger. hehlen), meaning the "hider." It is important to note that also the noble Balder and the brave Sigurd are sent to Hel after their deaths.[12] Likewise, Thomas Dubois also notes that "this generalized afterlife destination, depicted as cold, damp, and dark, appears typical in Scandinavian visions of the beyond."[13]

In addition to being the name of the ruler over the deceased, Hel also refers to the cosmic realm allocated to them.[14] While this was originally seen as a general (read: not morally-evaluative) destination for the dead,[15] by the thirteenth century it came to be seen as a realm of punishment: "evil men go to Hel and thence down to the Misty Hel; and that is down in the ninth world."[16] As described in Sturluson's Prose Edda, it is a place thronged with the shivering and shadowy spectres of those who have died ingloriously of disease or old age. Hel is also home to dishonourable people who have broken oaths. This depiction is strongly echoed in the Völuspá:

A hall I saw, | far from the sun,
On Nastrond it stands, | and the doors face north,
Venom drops | through the smoke-vent down,
For around the walls | do serpents wind.
I saw there wading | through rivers wild
Treacherous men | and murderers too,
And workers of ill | with the wives of men;
There Nithhogg sucked | the blood of the slain.[17]

Given its role as a realm of the dead, various myths describe gods (or deceased humans) traveling the frightful Hel-roads seeking to commune with the departed. In Baldr's Draumr (Balder's Dreams), Odin descends to the underworld to consult with a deceased seeress (a strong parallel to the introductory section of the Völuspá) who he wishes to consult about his son's prescient visions of his own demise:

Then Othin rose, | the enchanter old,
And the saddle he laid | on Sleipnir's back;
Thence rode he down | to Niflhel deep,
And the hound he met | that came from hell.
Bloody he was | on his breast before,
At the father of magic | he howled from afar;
Forward rode Othin, | the earth resounded
Till the house so high | of Hel he reached. [18]

Likewise, the entire tale told by Brunhild in Helreith Brynhildar (describing her courtship with the doomed Sigurd) occurs after her death, on the road to Hel (the title itself can be literally translated as "Brunhild's Hel-Ride"). This context makes her statement, "But yet we shall live | our lives together, Sigurth and I," all the more poignant.[19]

Finally, the dead dwelling in Hel are seen to play an important role in some depictions of Ragnarök (the cataclysm that will rend the current world order asunder). In these tales, the host of the departed are seen accompanying Loki to the battlefield where the final confrontation will take place:

O'er the sea from the north | there sails a ship
With the people of Hel, | at the helm stands Loki;
After the wolf | do wild men follow,
And with them the brother | of Byleist goes.[20]

The involvement of the souls of the departed in the final battle is also described in the Grimnismol:

Hard does it seem | to the host of the slain
To wade the torrent wild.[21]