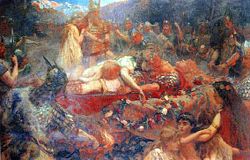 In Norse mythology, Brunhild or Brynhildr is one of the Valkyries or warrior maidens esteemed for their military prowess. Her honored status as a female warrior is paralleled in other religious traditions that describe female figures in symbolic or real struggles against evil: for example, compare the Prophetess Deborah (in Judaism) and the Goddess Kali (in Hinduism), among others. She is a major character in some Norse texts including the Völsunga saga and the Eddic poems depicting the same events. Under the name Brünnhilde, she also appears in the Nibelungenlied and is present in Richard Wagner's modern opera Der Ring des Nibelungen.

The mythological figure of Brunhild was probably inspired by the real Visigothic princess named Brunhilda of Austrasia, who was married to the Merovingian king Sigebert I in 567. Whether this identification is historically accurate, it is compatible with the fact that that many of the Valkyries featured in the Poetic Edda are described as mortal women (often of royal blood).

Brunhild in a Norse Context

As a Valkyrie, Brunhild belonged to a complex religious, mythological and cosmological belief system shared by the Scandinavian and Germanic peoples. This mythological tradition, of which the Scandinavian (and particularly Icelandic) sub-groups are best preserved, developed in the period from the first manifestations of religious and material culture in approximately 1000 B.C.E. until the Christianization of the area, a process that occurred primarily from 900-1200 C.E. [1] The tales recorded within this mythological corpus tend to exemplify a unified cultural focus on physical prowess and military might.

Within this framework, Norse cosmology postulates three separate "clans" of deities: the Aesir, the Vanir, and the Jotun. The distinction between Aesir and Vanir is relative, for the two are said to have made peace, exchanged hostages, intermarried and reigned together after a prolonged war. In fact, the most significant divergence between the two groups is in their respective areas of influence, with the Aesir representing war and conquest, and the Vanir representing exploration, fertility and wealth.[2] The Jotun, on the other hand, are seen as a generally malefic (though wise) race of giants who represented the primary adversaries of the Aesir and Vanir.

The primary role of the Valkyries was to swell the ranks of Odin's deathless army by spiriting the "best of the slain" from the battlefield, away to Valhalla. The term itself comes from the Old Norse valkyrja (plural "valkyrur"), which consists of the words val ("to choose") and kyrja ("slaughter"). Thus, the term literally means choosers of the slain. It is cognate to the Old English wælcyrige. The modern German Walküre, which was coined by Richard Wagner, was derived from the Old Norse.[3][4]

In the mythological poems of the Poetic Edda, the Valkyries are supernatural deities of unknown parentage; they are described as battle-maidens who ride in the ranks of the gods or serve the drinks in Valhalla; they are invariably given unworldly names like Skogul ("Shaker"), Hlok ("Noise," "Battle") and Gol ("Tumult").[5]

Conversely, in the Heroic lays section of the same text, the Valkyries are described as bands of warrior-women, of whom only the leader is ever named. She is invariably a human woman, the beautiful daughter of a great king, though she shares some of the supernatural abilities of her anonymous companions.[6] Brunhild is the most famous example of this second type of Valkyrie.

According to the Völsunga saga, Brunhild is both the daughter of King Budli and a valkyrie in the service of Odin.[7] In this second role, she was ordered to decide a fight between two kings: Hjalmgunnar and Agnar. The valkyrie knew that the All-Father himself preferred the older king, Hjalmgunnar, yet she decided the battle for Agnar. For this infraction, Odin condemned Brynhildr to live the life of a mortal woman, imprisoned her in a remote castle behind a wall of shields on top of mount Hindarfjall in the Alps, and cursed her to sleep until any man would rescue and marry her. [8] 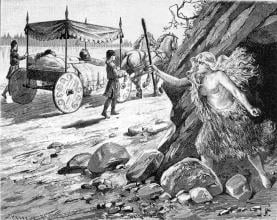 [Brynhildr spake:]
8. "Next I let | the leader of Goths,
Hjalmgunnar the old, | go down to hell,
And victory brought | to Autha's brother;
For this was Othin's | anger mighty.
9. "He beset me with shields | in Skatalund,
Red and white, | their rims o'erlapped;
He bade that my sleep | should broken be
By him who fear | had nowhere found.[9]

Time passed. After several weeks, the hero Sigurðr Sigmundson (Siegfried in the Nibelungenlied), heir to the clan of Völsung and slayer of the dragon Fafnir, entered the castle and awoke Brynhildr by removing her helmet and cutting off her chainmail armour. He immediately fell in love with the beautiful shield-maiden and proposed to her with the magic ring, Andvarinaut:

Sigurd spake, "None among the sons of men can be found wiser than thou; and thereby swear I, that thee will I have as my own, for near to my heart thou liest."
[Brynhildr] answers, "Thee would I fainest choose, though I had all men's sons to choose from."
And thereto they plighted troth both of them.[10]

Promising to return and make Brunhild his bride, Sigurðr then left the castle and headed for the court of Gjuki, the king of Burgundy.[11] Meanwhile, Brunhild kindled a fire around her castle and swore to avail herself only to a man who would brave the flames for her hand.

Gjuki's wife, the sorceress Grimhild, wanting Sigurðr married to her daughter Gudrun (Kriemhild in Nibelungenlied), prepared a magic potion that made Sigurðr forget about his beloved valkyrie. Her arcane brew was effective, and Sigurðr soon married Gudrun. Building upon this affront, the evil sorceress (who was now also Sigurd's mother-in-law) decided to make Brynhildr the wife of her son Gunnar (Gunther in the Nibelungenlied). Though Gunnar sought to court the comely shield-maiden, he found that his path was blocked by a seemingly insurmountable ring of fire surrounding the castle. He tried to ride through the flames with his own horse and then with Sigurðr's horse, Grani, but still failed.

Sigurd's progression from promise-bound lover to drug-addled husband of Gudrun is also detailed in the Gripisspo:

Gripir spake:
31. "Ye twain shall all | the oaths then swear
That bind full fast; | few shall ye keep;
One night when Gjuki's | guest thou hast been,
Will Heimir's fosterling [Brynhildr] | fade from thy mind."
Sigurth spake:
32. "What sayst thou, Gripir? | give me the truth,
Does fickleness hide | in the hero's heart?
Can it be that troth | I break with the maid,
With her I believed | I loved so dear?"
Gripir spake:
33. "Tricked by another, | prince, thou art,
And the price of Grimhild's | wiles thou must pay;
Fain of thee | for the fair-haired maid,
Her daughter, she is, | and she drags thee down."
Sigurth spake:
34. "Might I with Gunnar | kinship make,
And Guthrun win | to be my wife,
Well the hero | wedded would be,
If my treacherous deed | would trouble me not."
Gripir spake:
35. "Wholly Grimhild | thy heart deceives,
She will bid thee go | and Brynhild woo
For Gunnar's wife, | the lord of the Goths;
And the prince's mother | thy promise shall win."[12]

Agreeing to help his brother-in-law, Sigurðr then exchanged shapes with him and boldly vaulted over the fiery curtain. Brynhildr, who was suitably impressed by this display of valour, agreed to many the disguised hero. Thus, the two stayed there three nights, though each evening Sigurðr laid his sword between them in bed (implying that he did not take Brynhildr's virginity before passing her to Gunnar). This duplicitous situation is described by the unfortunate valkyrie, with the clarity of hindsight, in Helreith Brynhildar:

Gunnar and Sigurðr soon returned to their true forms, as Brynhildr had been convinced that she married Gunnar. The two couples returned to their respective homes and all seemed to have transpired without ill effect.[14]

Unfortunately, Gudrun and Brynhild, who happened to be bathing together in a nearby river, began to quarrel about whose husband was greater, with Brynhild boasting that even Sigurðr was not brave enough to ride through the flames into her castle. To the valkyrie's tremendous shame, Gudrun revealed that it was actually Sigurðr who had braved the ring of fire and, resultantly, that her marriage to Gunnar was a sham. Brynhildr, understandably enough, became enraged. Sigurðr, suddenly remembering the truth, tried to console her, but to no avail. As the valkyrie opines in the Helreith Brynhildar:

"Yet Guthrun reproached me, | Gjuki's daughter,
That I in Sigurth's | arms had slept;
Then did I hear | what I would were hid,
That they had betrayed me | in taking a mate."[15]

Heartbroken and furious, Brynhild plotted revenge by urging Gunnar to kill Sigurðr, goading him by claiming that the hero had deflowered her during one of their nights together. However, Gunnar and his brother Hogni (Hagen in the Nibelungenlied) were afraid to kill Sigurd themselves, as they had sworn oaths of brotherhood to him. Thus, they found it necessary to incite their younger brother, Gutthorm to kill Sigurðr by giving him a magic potion that enraged him. The youth, unmindful of the consequences, mudered Sigurðr in his sleep. In his death throes, Sigurðr, ever the warrior, threw his sword at Gutthorm, killing him instantly.[16] Even this revenge did not sate the emotional appetite of the furious valkyrie, as the Volsunga saga suggests:

From the eyes of Brynhild,
Budli's daughter,
Flashed out fire,
And she snorted forth venom,
As the sore wounds she gazed on
Of the dead-slain Sigurd.[17]

In her rage, Brynhildr herself killed Sigurðr's three-year-old son, and then she willed herself to die. When Sigurðr's funeral pyre was aflame, she threw herself upon it, and thus they passed on together to the realm of Hel.[18] Orchard notes that this self-immolation allowed her to usurp "in death the wifely role she had been denied when she lived."[19]

Brynhild in Other Sources

In the Nibelungenlied, Brünnhilde is depicted as the queen of Isenland (Iceland). In this account, Gunther outmaneuvers her in three warlike games with the help of Siegfried (who is equipped with an invisibility cloak). First, Brünnhilde throws a spear that three men only barely can lift towards Gunther, but the invisible Siegfried diverts it. Second, she throws a boulder that requires the strength of twelve men to lift a distance of twelve fathoms. Lastly, she leaps over the same boulder. Gunther, however, using the aid of Siegfried, is able to defeat her in these games, and takes her as his wife.[20]

The Nibelungenlied also differs from Scandinavian sources in its silence on Brünnhilde's fate; she fails to kill herself at Siegfied's funeral, and presumably survives Kriemhild and her brothers.

Though the cycle of four operas is titled Der Ring des Nibelungen, Richard Wagner in fact took Brünnhilde's role from the Norse sagas rather than from the 'Nibelungenlied. Brünnhilde appears in the latter three operas (Die Walküre, Siegfried, and Götterdämmerung), playing a central role in the overall story of Wotan's downfall.

Retrieved from https://www.newworldencyclopedia.org/p/index.php?title=Brunhild&oldid=1036387
Categories:
Hidden category:
This page was last edited on 30 April 2020, at 16:28.
Content is available under Creative Commons Attribution/Share-Alike License; additional terms may apply. See Terms of Use for details.