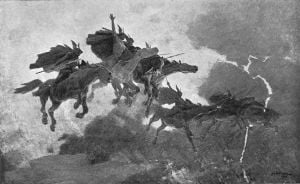 The Ride of the Valkyrs by John Charles Dollman, 1909

In Norse mythology, the Valkyries are female warrior deities who serve Odin (the chief god in Norse pantheon). According to the Prose Edda, “Odin sends [the Valkyries] to every battle. They allot death to men and govern victory.”[1] The primary purpose of the Valkyrie was to select the most heroic of the warriors who had died in battle and to carry them off to Valhalla (Odin's "Hall of the slain"), where they became the deathless einherjar ("lone fighters") who were to fight at Odin's side during the eschaton (Ragnarök).

The Valkyries are esteemed as glorified warrior-maidens, which is a somewhat atypical depiction for women. Nevertheless, their respected military role is paralleled in other religious traditions that place an emphasis on strong female fighting figures: compare, for example, the Prophetess Deborah (in Judaism) and the Goddess Kali (in Hinduism).

The word "Valkyrie" comes from the Old Norse valkyrja (plural "valkyrur"), which consists of the words val ("to choose") and kyrja ("slaughter"). Thus, the term literally means choosers of the slain. It is cognate to the Old English wælcyrige. The modern German Walküre, which was coined by Richard Wagner, was derived from the Old Norse.[2]

Valkyries in a Norse Context

As Norse deities, the Valkyries belonged to a complex religious, mythological and cosmological belief system shared by the Scandinavian and Germanic peoples. This mythological tradition, of which the Scandinavian (and particularly Icelandic) sub-groups are best preserved, developed in the period from the first manifestations of religious and material culture in approximately 1000 B.C.E. until the Christianization of the area, a process that occurred primarily from 900-1200 C.E.[3] The tales recorded within this mythological corpus tend to exemplify a unified cultural focus on physical prowess and military might.

Within this framework, Norse cosmology postulates three separate "clans" of deities: the Aesir, the Vanir, and the Jotun. The distinction between Aesir and Vanir is relative, for the two are said to have made peace, exchanged hostages, intermarried and reigned together after a prolonged war. In fact, the most significant divergence between the two groups is in their respective areas of influence, with the Aesir representing war and conquest, and the Vanir representing exploration, fertility and wealth.[4] The Jotun, on the other hand, are seen as a generally malefic (though wise) race of giants who represented the primary adversaries of the Aesir and Vanir.

The primary role of the Valkyries was to swell the ranks of Odin's deathless army by spiriting the "best of the slain" from the battlefield, away to Valhalla. However, it appears that there was no clear distinction between the Valkyries and the Norns because Skuld, for instance, was both a valkyrie and a norn. 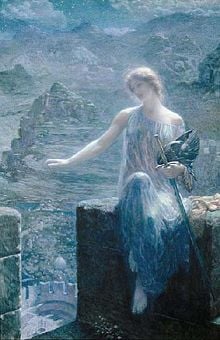 The Valkyrie's Vigil, by the Pre-Raphaelite painter Edward Robert Hughes. Hughes downplays the warrior aspect of the Valkyrie, depicting instead a beautiful young woman in an ethereal dress. Her armor and weapons are present, but set aside and unused.

Though the extant texts are silent on the ultimate origin of the mythic Valkyries,[5] many of the well-known Valkyries are reported as having mortal parents:[6] Some scholars now suggest that the original Valkyries were the priestesses of Odin[7]—old women who officiated at sacrificial rites in which prisoners were executed (“given to Odin”). These priestesses sometimes carried out the gruesome sacrifices themselves, which involved the use of a ritual spear. By the time of the Poetic Edda's compilation (in the late twelfth or early thirteenth century), these rituals had given rise to legends of supernatural battle-maidens who took an active part in human conflict, deciding who should live and who should die.[8] Henry Bellows, in the notes to his translation of the Poetic Edda, proposes an alternate interpretation of this historical time-line, suggesting that:

The conception of the supernatural warrior-maiden was presumably brought to Scandinavia in very early times from the South-Germanic races, and later it was interwoven with the likewise South-Germanic tradition of the swan-maiden ... [A] complication developed when the originally quite human women of the hero-legends were endowed with the qualities of both Valkyries and swan-maidens.[9]

In the mythological poems of the Poetic Edda, the Valkyries are supernatural deities of unknown parentage; they are described as battle-maidens who ride in the ranks of the gods or serve the drinks in Valhalla; they are invariably given unworldly names like Skogul ("Shaker"), Hlok ("Noise," "Battle") and Gol ("Tumult").[10]

Conversely, in the Heroic lays section of the same text, the Valkyries are described as bands of warrior-women, of whom only the leader is ever named. She is invariably a human woman, the beautiful daughter of a great king, though she shares some of the supernatural abilities of her anonymous companions. In the first of the three Helgi Lays, Helgi Hjörvarðsson is accosted by a band of nine Valkyries the leader of whom, Svava, is the daughter of a king called Eylimi. In the second and third lays, the Valkyries are led by Sigrun, who is the daughter of King Hogni; she marries the hero Helgi Hundingsbani and bears him sons. The most famous of the Valkyries, Brynhildr, is also a human princess. In the Sigrdrífumál (The Ballad of the Victory-Bringer) she is never named, being called simply Sigrdrífa (“Victory-Bringer”), and there are only hints that she is not a deity; what's more, we are told nothing of her parentage. In the corresponding passage in the Volsunga saga, however, she is identified as Brynhildr, the daughter of King Budli. (Sigrdrífa is also identified with Brynhildr in another heroic lay, Helreið Brynhildar, or Bryndhildr's Ride to Hel.)[11] 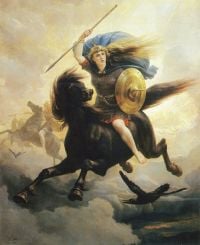 The inclination towards romantic depictions of Valkyries is evident in Valkyries by Peter Nicolai Arbo, 1869

Various individual Valkyries are mentioned throughout Nordic and Germanic literature.

Several Valkyries appear as major characters in extant myths. As mentioned above, they are often depicted as the daughters of human kings who, for whatever reason, were given the task of leading the legion of Valkyries.

Apart from the well-known Valkyries listed above, the extant mythic corpus also contains numerous lists of additional Valkyries. However, in virtually all of these cases, nothing is known of the figures enumerated therein.

In Grímnismál, Odin provides the following catalogue of Valkyries:

In Völuspá, there are still more names:

On all sides saw I | Valkyries assemble,
Ready to ride | to the ranks of the gods;
Skuld bore the shield, | and Skogul rode next,
Guth, Hild, Gondul, | and Geirskogul.
Of Herjan's maidens | the list have ye heard,
Valkyries ready | to ride o'er the earth.[14]

As can be seen from the above, several of the names exist in different versions. Many of them have a readily apparent warlike meaning - Hjörþrimul, for example, means "battle of swords" while Geirahöð means "battle of spears." However, to what an extent this multitude of names ever represented individual mythological beings with separate characteristics is debatable. It is likely that many of them were never more than names, a contention that is compatible with the fact that only a few occur in extant myths.