The extent of the Umayyad caliphate in 750, including Andalusia (colored yellow).

The Umayyad conquest of Hispania (711–718) began as an army of the Umayyad Caliphate consisting largely of Berbers, inhabitants of Northwest Africa recently converted to Islam, invaded the Christian Visigothic Kingdom located on the Iberian peninsula (Hispania). Under the authority of the Umayyad Caliph Al-Walid I of Damascus, and commanded by Tariq ibn Ziyad, they disembarked in early 711, perhaps at Gibraltar, and campaigned their way northward. Tariq's forces were reinforced the next year by those of his superior, the Emir Musa ibn Nusair. During the eight-year campaign, most of the Iberian Peninsula was brought under Muslim occupation, save for remote areas in the northwest (Galicia and Asturias) and largely Basque regions in the Pyrenees. The conquered territory, under the Arabic name al-Andalus, became part of the expanding Umayyad empire. The invaders subsequently moved northeast across the Pyrenees, but were defeated by the Frank Charles Martel at the Battle of Tours (Poitiers) in 732. Muslim control of French territory was intermittent and ended in 975.

Though Muslim armies dominated the peninsula for centuries afterward, Pelayo of Asturias's victory at the Battle of Covadonga in 722 preserved at least one Christian principality in the north. This battle later assumed major symbolic importance for Spanish Christians as the beginning of the Reconquista. However, the Umayad conquest of Hispania gave birth to a period in human history of almost unique cultural exchange. So famed did the academies and libraries of Muslim Spain become, where Jews, Christians and Muslims studied and collaborated together, that scholars flocked there from such centers of learning as Paris and Oxford universities. On the one hand, the story of Christian-Muslim-Jewish relations from the invasion until the Fall of Granada, the last Muslim emirate in 1492, cannot be reduced to one of harmony. On the other hand, it cannot be reduced to a story of constant hostility either. The reality was more complex. In an increasingly interdependent and pluralist world, Humanity as a whole will benefit more when accounts of hostility between different races and religions are offset by stories of harmony and fruitful exchange, called convivencia in Spanish.

Precisely what happened in Iberia in the early eighth century is subject to much uncertainty. There is one contemporary Christian source, the Chronicle of 754[1] (which ends on that date), regarded as reliable but often vague. It describes the conquest with "expressions of horror and grief" yet at the same time "treats the Muslim governors as legitimate rulers."[2] There are no contemporary Muslim accounts. There is an account dating from the ninth century by Ibn 'Abd al-Hakam.[3] This describes how a Count Julian approached Tariq ibn Ziyad offering assistance if he invaded Iberia. According to this account, the ruler of the Goths, Roderic or Roderick has raped or taken advantage of his daughter and Julian could not see how he might "punish him or pay him back except by sending the Arabs against him."[4] In this account, Julian provided ships to carry the Muslim force across the straits. Other legends suggest that arrangements were also in hand for Jews in some of the Christian cities to open the gates for the invading army in return for less restrictions under the Muslims. This is a controversial topic, since Christians later blamed Jews for collusion with the Muslims. Chazan suggests that while they were not responsible for bringing the Muslims to Spain, once they were there they "were quite comfortable cooperating with their new rulers." Muslims "freely engaged Jewish courtiers" especially physicians.[5] Jewish writer Marek Halter, in his sweeping and soundly researched historical novel, The Book of Abraham, follows al-Hakan's account and has Jews accompany the Muslims to help prepare their reception. He has both Christian nobles and Jews "everywhere … waiting" for the Muslims "as liberators."[6] The manner of King Roderic's ascent to the throne is unclear; there are accounts of dispute with the son of his predecessor Wittiza, and accounts that Wittiza's family fled to Tangier and solicited help from there. Numismatic evidence suggests some division of royal authority, with several coinages being struck.

As to the initial nature of the expedition, historical opinion takes four directions: (1) That a force was sent to aid one side in a civil war in the hope of plunder and a future alliance; (2) that it was a reconnaissance force sent to test the military strength of the Visigothic kingdom; (3) that it was the first wave of a full-scale invasion; (4) that it was an unusually large raiding expedition with no direct strategic intentions. In fact, given that the caliphate was an expansionist polity, no reason for conquest was needed.

What is clear is that in the early 8th century, a modest army estimated at some 10,000-15,000 people< led by Tariq Ibn Ziyad crossed from North Africa. Ibn Abd-el-Hakem reports, one and a half century later, that "the people of Andalus did not observe them, thinking that the vessels crossing and recrossing were similar to the trading vessels which for their benefit plied backwards and forwards."[4] It defeated the Visigothic army, led by King Roderic, in a decisive battle in 712 and went on to take control of most of Iberia. The Chronicle of 754 states that "the entire army of the Goths, which had come with him fraudulently and in rivalry out of ambition for the Kingship, fled."[2]

Roderic and the great majority of the Visigothic elite are believed to have been killed. Such a crushing defeat would have left the Visigoths largely leaderless and disorganized. In this regard, the ruling Visigoth population is estimated at a mere 200,000 people out of an estimated seven or eight million total population. The survivors fled north to Écija, near Seville. The resulting power vacuum, which may have indeed caught Tariq completely by surprise, would have aided immensely the Muslim conquest.

The conquering army was made up mainly of Berbers, who had themselves only recently come under Muslim influence and were probably only lightly Islamized. It is probable that this army represented a continuation of a historic pattern of large-scale raids into Iberia dating to the pre-Islamic period, and that actual conquest was not originally planned. Both the Chronicle and later Muslim sources speak of raiding activity in previous years, and Tariq's army may have been present for some time before the decisive battle. It has been proposed that the fact that the army was led by a Berber, and that the Ummayad Governor of North Africa, Musa ibn Nusayr, only arrived the following year, supports this possibility—the governor had not stooped to lead a mere raid, but hurried across once the unexpected triumph became clear. The Chronicle of 754 states that many townspeople fled to the hills rather than defend their cities,[7] which might support the view that this was expected to be a temporary raid rather than a permanent change of government.

An alternative possibility is that the conquest was a slower affair, given that at least one peace treaty dates from two years after the invasion. In this view, some cities resisted for longer periods, some capitulated swiftly while others voluntarily negotiated peace terms. While the Chronicle has it that cities "sued for peace under duress"[7] the Treaty of Tudmir (713) reads like the result of a more peaceful process.[8] Certainly some cities, including Cordoba, surrendered without any resistance.

There is a tendency to represent relations between Christians and Muslims in Spain, despite a tradition of co-existence and scholarly exchange known as Convivencia that existed for most of the Ummayad period (755-1031) and which did not completely disappear after this, as characteristically hostile. Yet the reality was never as simple; inter-marriage took place at the highest levels, at times Christians allied themselves with some Muslims and some Muslims with some Christians.

Even the almost legendary El Cid, represented in story as a type of Christian crusader, worked for a Muslim ruler during his life. As early as 777, some Muslim emirs who were unhappy with the rule of their Umayyad overlord in Cordoba approached Charlemagne to help them.[9] The story of the subsequent encounter entered European myth as a confrontation between light and darkness, generating the The Song of Roland which makes no mention that the future Holy Roman Empire|Holy Roman Empire had Muslim allies. 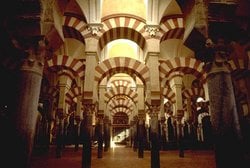 The Great Mosque, Cordoba, one of the triumphs of Ummayad architecture in Spain.

The conquest led to a period of several hundred years in which the Iberian peninsula was known as Al-Andalus, dominated by Muslim rulers, and with only a handful of small Christian states surviving in the mountainous north. In 756, Abd ar-Rahman I, a survivor of the recently overthrown Umayyad Dynasty, seized power in the province, founding an independent dynasty that survived until the eleventh century. From 756 until 929, the Cordova based rulers used the title "Emir" (commander) then claimed the title caliph. This caliphate fell in 1031, when the Muslim territory was reduced in size and fractured into the Taifa emirates, smaller states. Muslim domination lasted longer: until the defeat of the Almohads in the 13th century, after which the Christian Reconquista became irresistible. It was under the Umayyads, beginning with the rule of Abd ar-Rahman himself, that what Menocal describes as a "complex culture of tolerance" developed.[10] In the spirit of convivencia, Jews, Christians and Muslims took part in several centuries of scholarly exchange, innovation and cultural symbiosis.[11] It is sometimes said top have lasted until the fifteenth century, although some of the later Muslim dynasties in Spain were less tolerant of other religious communities.

As discussed above, much of the traditional narrative of the Conquest is more legend than reliable history—some of the key events and the stories around them are outlined below.

The Umayyad conquest of Hispania gave birth to a period in human history of almost unique cultural exchange. So famed did the academies and libraries of Muslim Spain become that scholars flocked to study and research and collaborate there from such centers of learning as Paris and Oxford University]]. On the one hand, the story of Christian-Muslim-Jewish relations from the invasion until the Fall of Granada, the last Muslims emirate in 1492 cannot be reduced to one of harmony. On the other hand, it cannot be reduced to a story of constant hostility either. The reality was more complex. As O'Shea points out, O’Shea both Christians and Muslims are often guilty of a type of amnesia when they recollect their past encounters, so that epic battles and milestones, such as battles fought in Spain between 711 and 1492, are written large while incidents of convivencia are forgotten; "By combining the epochal battles with the eras of convivencia, a clearer picture of the complex encounter of Christianity and Islam emerges, one that combats the selective, agenda-driven amnesia that has settled over the subject among some of the religious chauvinists of our own day.”[12]