Traffic at night around Namdaemun, Seoul

Transportation in South Korea refers to all modes of transportation that have been developed in South Korea from before the Japanese colonization of Korea in 1905 until the present day. That comprises railroads including the bullet train and defunct street cars, subways, automobile and highways, ships including ferries, and airlines both domestic and international.

In the late 1800s, officials in the Joseon court split on whether to adopt western transportation technology, as Japan had, or to reject it. Japan, partly due to the advantages gained by adopted Western technology, annexed Korea in 1905 and carried out a forced technology development, laying railroad tracks and bringing trains and stationing steam powered ships in Korean ports. After the Korean War, especially after the 1960s, South Korea began to develop an extensive networks of railways, highways, bus routes, ferry services, and air routes that criss-cross South Korea. Today South Korea's transportation system is modern, effective, and affordable for most South Koreans.

South Korea's railroad network links the entire country. The first railroad linking Seoul and Inch'on opened September 1899. The Japanese constructed other major lines during the colonial period, including Mokpo, Masan, and Busan lines. They connected to Seoul and Sinuiju in North Korea linking with the Trans-Siberian Railway. The Korean War badly damaged the railroad network, which the South Korean government rebuilt and improved. The establishment of the DMZ severed railroad lines between North and South Korea. 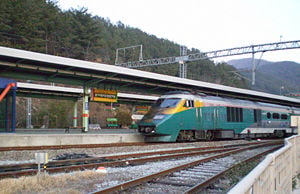 Throughout the 1970s and 1980s, the Korean National Railroad, a state-run corporation under the Ministry of Transportation, managed all rails, electrifying heavily used tracks and laying additional tracks. Railroads in the 1980s primarily transported freight, but they also carried significant passenger traffic around Seoul and in the heavily-traveled corridor linking the capital with the southern port of Pusan. Although the railroad system grew little during the 1980s (with 5,600 kilometers of tracks in 1980), rail improvements—the increased electrification of tracks, replacement of older tracks, and the addition of rolling stock—allowed rail traffic to boom. Some of the busiest lines south of Seoul linking the capital with Pusan and Mokpo had three or four tracks. The 1980s also saw the introduction of high-speed trains connecting Seoul with Busan, Jeonju, Mokpo, and Gyeongju. The famous "Blue Train" (Saemaul-ho) between Seoul and Busan (via Daejeon and Daegu) took only 4 hours and 50 minutes and offered two classes of service, first class and special. In 1987, approximately 525 million passengers and 59.28 million metric tons were transported by the railroad system.

In 1987, the combined length of the country's railroad network measured approximately 6,340 kilometers, including approximately 761.8 kilometers of doubletrack railroads and 1,023 kilometers of electric railroads. Electrified Suburban lines connected to the Seoul subway system. Rolling stock included 459 diesel locomotives, 90 electric locomotives, 133 motor coaches, and 370 electric motor cars. In 1989, the Ministry of Transportation and Construction opened negotiations for the construction of a high-speed railway systems similar to those in Japan and France. The Korail[1] is the sole passenger railway operator.

Total railroad passengers in South Korea have decreased since 1990s. Despite continuous road construction, railways still constitute one of the primary means South Koreans travel over long distances within the country. In 2002, KNR maintained 3,124 km (1,941 mi) of track, increasing to 3,472 km (1,361 km electrified) in 2005. 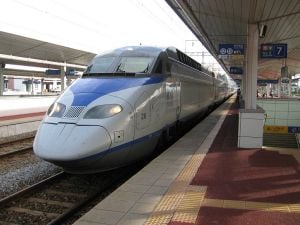 The high-speed railway known as Korea Train Express (KTX) currently operates between Seoul and Busan or Mokpo. The railway uses French TGV technology. Service started in April 2004—with some sections operating along preexisting track—while service on the railway's fully separated tracks will begin in 2010. Trains reach a maximum speed of 300 km/h on dedicated high-speed tracks.

Until the division of Korea following the end of the Second World War, the Gyeongi Line and Gyeongwon Line extended into North Korea. The Gyeongi Line connected Seoul to Kaesŏng, P'yŏngyang, and Shinŭiju on the Chinese border, while the Gyeongwon Line served Wŏnsan on the east coast. Another line, the Kŭmgang-san Line, connected the Southern city of Cheorwon on the Gyeongwon Line to Mt. Kŭmgang in the North. The North and South Korean governments are reconnecting Gyeongui Line and the Donghae Bukbu Line south and north halves. On May 17, 2007 two test trains ran on the reinstalled lines; one on the west from Munsan to Kaesong; the second on the east from Jejin to Kumgang.[2] 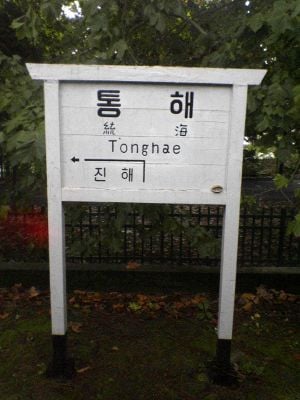 Most routes enjoy frequent service, with trains every 15-60 minutes connecting Seoul to all major South Korean cities. Four classes of train operate: KTX, the Korean high-speed railway system, travels from downtown Seoul to downtown Busan faster than an airplane, makes less stops and yet costs more; the Saemaul-ho (새마을호, "New Village") service, makes the fewest stops and provides the most comfortable seating; Mugunghwa-ho (무궁화호, "Rose of Sharon") service, popular with most Koreans, stops at most stations, and offers a mixture of reserved and unreserved seating; and Commuter (통근 열차) service, the slowest and cheapest of the three, stops at all stops, and offers no reserved seating.

Seoul's subway system is the oldest system in the country, with the Seoul Station-Cheongnyangni section of Line 1 opening in 1974. In 2007, eight lines extend 178 miles with 263 substations, transporting 5.6 million passengers a day. Line 9 in Seoul is in building phase 3.

Streetcars operated in Seoul from the turn of the twentieth century until roughly 1970. The network covered the whole downtown area (Junggu and Jongnogu) as well as surrounding neighbourhoods, including Cheongnyangni in the east, Mapogu in the west, and Noryangjin across the Han River to the south. The network was largely replaced by the subway system whose construction began in the early 1970s. Lines 1 and 2 follow the old streetcar routes along Jongno and Euljiro respectively.

The expansion and rapid improvement of South Korea's long-distance highway system led to the growth of an intercity bus system in the 1980s. In 1988, ten express bus companies operated a fleet of approximately 900 buses connecting all of the major cities of Korea.

Some cities have their own bus classifying system.

An extensive network of comfortable, high-speed buses serves from all parts of the country serve Incheon International Airport. The government passed regulations prohibiting many department stores of maintaining their own small network of buses for shoppers. Most churches and daycares still send buses around to pick up their congregants or pupils. 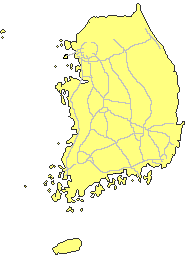 Roads and expressways rapidly expanded during the late 1980s, before and after the 1988 Olympics. Although the total kilometers of roads rapidly increased, the construction failed to keep pace with the flood of cars and trucks on Korean roadways. In 1988, Korea had 51,000 kilometers of roadways, less than half unpaved. Express highways between major cities measured 1,539 kilometers in 1988, compared to 86.8 kilometers in 1967.

With few cars and trucks on the roads in the 1960s, traffic congestion never happened. That changed with the explosive sale of Korean made automobiles in the late 1980s. In 1989, the government started construction on nine new expressways with a combined length of 1,243 kilometers. In 1996, when those expressways and two additional projects completed, South Korea had twenty-one expressways with a combined length of 2,840 kilometers.

Motor vehicle registration in Korea increased dramatically from 527,729 in 1980 to 15,493,681 in 2006. Korean automakers Hyundai, Kia, and Daewoo sought to build their sales through the domestic market while the government restricted the importation of cars from abroad. That, coupled with a dramatic increase in GNP as well as person income, Korean bought cars with abandon. Automobiles increased between 1980 and 2006 at a rate of fourteen percent a year. Passenger cars experienced the largest increase from 249,102 to 11,224,016, more than 45 times. As of Feb. 2006, the Korean government registered 1,113,935 passenger/cargo vehicles, 3,107,729 trucks, and 48,001 special vehicles.[5]

Effective cut off from the Asian mainland by North Korea, South Korea has turned toward shipping as the primary way of moving products. South Korea has become one of the world's largest shipbuilding industries, operating an extensive system of ferry services as well.

As one of the world's most advanced IT technology exporters, South Korea operates one of the largest merchant fleets that sail regularly to China, Japan, and the Middle East. Large conglomerates like Samsung operate most fleets while small, private operators run most ferries. Small islands, served by ferries, dot the south and west coasts of the country. Ferries serve the larger offshore Jeju and Ulleung Islands as well. Ferries also operate between South Korea, China, and Japan. Major centers for ferry service include Incheon, Mokpo, Pohang, and Busan. 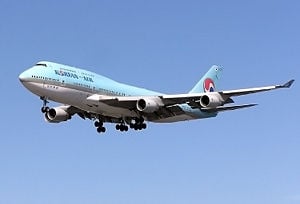 Although most Koreans travel between cities by express bus or train, air service between major cities increased, especially among business travelers. Korean Air, founded by the government in 1962 and privately owned since 1969, served as South Korea's sole airline until 1988.

The two airlines combined offered 1,700 flights a week internationally in 2004, maintaining a combined fleet of over 180 passenger and cargo aircraft. By the beginning of 2004, they served 95 cities, ranking fifth in the world for total cargo carried and twelfth in the world to total number of passengers. Domestically, Korean Air and Asiana serve 14 cities, transporting 21.3 million passengers in 2003. 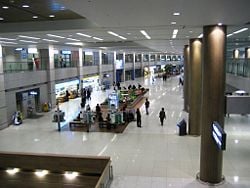 Retrieved from https://www.newworldencyclopedia.org/p/index.php?title=Transportation_in_South_Korea&oldid=1034115
Categories:
Hidden category:
This page was last edited on 25 March 2020, at 21:47.
Content is available under Creative Commons Attribution/Share-Alike License; additional terms may apply. See Terms of Use for details.