From New World Encyclopedia
Jump to:navigation, search
Previous (The Evacuation from Dunkirk)
Next (The Gambia)

The Four Seasons (known off and on since 1967 as Frankie Valli & The Four Seasons), are an American pop and rock group, distinct from many similar groups of the early to mid-1960s for its high-pitched lead singing and creating street-corner harmonies, reminiscent of doo wop.

In 1960, the group known as The Four Lovers evolved into The Four Seasons, with Frankie Valli as the lead singer. With songs like "Sherry," "Big Girls Don't Cry," and "Walk Like a Man," the Four Seasons burst onto the scene with an unprecedented series of number one hits. Later records, such as Dawn (Go Away) and Rag Doll, made them one of the most successful American groups in competing against the Beatles and other "British invasion" rock groups in 1964. By the mid 1960s, the Four Seasons had become an internationally famous rock-and-roll band. To date, they have sold over 100 million albums.

The Four Seasons (group members 1960–1965) were inducted into the Rock and Roll Hall of Fame in 1990 and the Vocal Group Hall of Fame in 1999. More recently, the musical Jersey Boys used their story and music to garner four Tony Awards.

In 1954, Frankie Valli's joined the Variety Trio to form the group that evolved into the Variatones, with brothers Tommy and Nick DeVito and Hank Majewski. This ensemble performed and recorded under a variety of names in 1954 and 1956 before settling on the Four Lovers as its name. The quartet's first record, You're the Apple of My Eye, reached number 62 on the Billboard Hot 100 singles chart. Five additional Four Lovers singles were released over the next year on RCA Victor, with virtually no sales, airplay, or jukebox popularity. In 1957, the group's seventh single, this time on Epic), had a similar lack of success.

From 1956 until 1960, the Four Lovers stayed together, performing in clubs and lounges and recording on various record labels under a number of different names, including Frankie Tyler, Frankie Valley, Frankie Valley and the Travelers, Frankie Valle and the Romans, The Village Voices, and The Topics.

In 1958, the group started working with producer Bob Crewe, primarily with session work. Later that year, the Four Lovers were performing in Baltimore on the same stage as The Royal Teens, who were riding the wave of success of their hit song "Short Shorts," co-written by the 15 year old Bob Gaudio. The next year, Gaudio replaced Nick DeVito in the Four Lovers lineup, doubling on keyboard and guitar, and Charles Calello replaced Majewski on bass. In 1960, Calello left and was replaced by Nick Massi, but would soon return as the group's arranger.

Despite the change of personnel, the fortunes of the Four Lovers did not change, evening failing to win a job after auditioning at a bowling alley in 1961. According to Gaudio: "We figured we'll come out of this with something. So we took the name of the bowling alley. It was called the Four Seasons." This proved to be the turning point of the group. On a handshake between Bob Gaudio and lead singer Frankie Valli, the Four Seasons Partnership was formed.

The rise of the Four Seasons 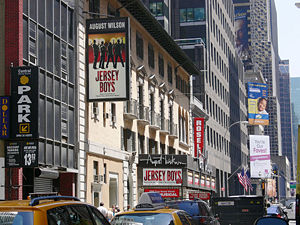 The Tony Award-winning musical Jersey Boys is based on the career and music of the Four Seasons.

The Four Seasons released their first single in 1961 ("Bermuda"/"Spanish Lace" on Gone Records). While the single did not chart, the song gave the group enough of a following to be signed with Vee Jay Records later that year.

In 1962, the group released its first album featuring the single, "Sherry." The song's unique sound took it to number one on the pop charts. Under the guidance of producer/songwriter Bob Crewe, the Four Seasons followed up "Sherry" with several more million-selling hits, including "Big Girls Don't Cry" (their second number one hit), "Walk Like a Man" (their also number one), "Candy Girl," "Ain't That a Shame," and several others. The also released a Christmas album in December of 1962 and charted with a unique rendition of "Santa Claus Is Coming to Town."

From 1962 to early 1964, only the Beach Boys matched the Four Seasons in record sales in the United States, and their first three with Vee Jay. Their non-holiday releases—ignoring their version of "Santa Claus Is Coming to Town"—marked the first time that a vocal group hit number one on the Billboard singles charts three times in a row.

From Vee-Jay to Philips

Despite the group's success, Vee Jay Records was in financial distress. The label eventually filed for bankruptcy, and a royalties dispute between Vee Jay and the Four Seasons headed to the courtrooms. At the end of 1963, the group moved to Philips Records, a division of Mercury Records. (In the settlement of the lawsuit against Vee Jay in 1965, Vee Jay retained release rights for all material the group recorded for the label. The group was obligated to deliver one final album to Vee Jay, which they did in the form of a live LP.)

The change of label did not diminish the popularity of the Four Seasons in 1964, nor did the onslaught of the British Invasion and Beatlemania. However, "Dawn (Go Away)" was kept from the number one spot by several simultaneous Beatles hits. In mid-July of that year, the Four Seasons made their fourth trip to the top of the singles charts with "Rag Doll." Additional big-selling singles from 1964 included "Ronnie," "Big Man in Town," "Save It For Me," "Bye, Bye, Baby (Baby Goodbye)," and "Girl Come Running." In the meantime, Vee Jay continued releasing Four Seasons singles from its vault, including "Stay" and "Alone."

Following several personnel changes, the Four Seasons released recordings under a variety of names, including The Valli Boys, The Wonder Who? and Frankie Valli. More Top 20 singles credited to the Four Seasons followed in 1965, 1966, and 1967, including "Let's Hang On!," "Don't Think Twice" (as the Wonder Who?), "Working My Way Back to You," "I've Got You Under My Skin," "Can't Take My Eyes Off You" (released as a Valli "solo"), and "C'mon Marianne, which was their last Top Ten hit of the 1960s.

A change to Motown

By 1969, the public interest moved away from street corner pop and toward rock with a harder edge, deeper soul music, and music with more socially conscious lyrics. The group's last single on Philips, "Patch of Blue," featured the group's name as "Frankie Valli & the Four Seasons," but the change in billing did not change the act's lack of success.

After leaving Philips, the rechristened act signed onto Motown Records with disastrous results. The first LP, Chameleon, failed to sell for the Motown subsidiary label MoWest Records in 1971. Several additional releases did no better. In late 1973 and early 1974, the Four Seasons recorded eight songs for a planned second Motown album, but the company refused to move forward with plans to release it to the public, leading to the Four Seasons and Motown parting ways. 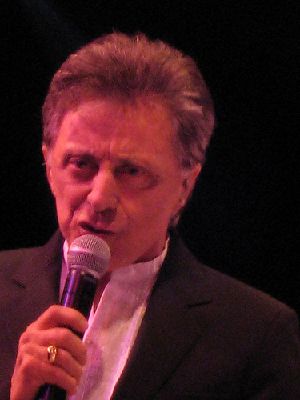 Despite this dry spell as a recording group, the Four Seasons never lost its popularity as a performing act. In 1975, Valli and Gaudio managed to get the group signed with Warner Bros. Records as the disco era dawned. At the same time, Private Stock Records released The Four Seasons Story, a two record compilation of the group's biggest hit singles from 1962 to 1970. It quickly became a gold record, selling over one million copies before the RIAA started awarding platinum records for million-selling albums.

In 1975, record sales exploded for both Valli and the Four Seasons, as both acts had million-selling singles in the United States. "My Eyes Adored You" hit number on the Hot 100 for Valli in March, and "Who Loves You" peaked at number three in November for the group. In the United Kingdom, Tamla Motown released "The Night" as a single, and it reached the number seven position on the UK singles chart.

Until this point, all Valli's "solo" hits were, in fact, Four Seasons productions, but in the summer of 1975 Valli had his first truly solo hit when the Bob Crewe-produced "Swearin' to God" followed "My Eyes Adored You" into the upper reaches of the Hot 100, peaking at the number six position during the growing disco craze.

The album Who Loves You became a surprise million-seller for the group. It was the first Four Seasons album to feature lead vocals by singers other than Valli. Gerry Polci did the majority of the lead vocals, sharing them with Valli and Don Ciccone. "December, 1963 (Oh, What a Night)" had Polci sing lead in the first verse, Ciccone in the second, and Valli doing lead vocals only in the chorus. With this song, the Four Seasons hit number one for the fifth time. Although the group also scored a minor hit with "Silver Star," "December 1963" marked the end of the Four Seasons' hit recordings.

In 1978, Valli reached hit number one again with his solo single, "Grease," while the motion picture of the same name became the highest-grossing musical in cinematic history. Both Valli and the group released singles and albums on an occasional basis, but after "Grease," only a remixed version of their biggest seller, "December 1963," would visit the upper half of the Hot 100 (in 1994).

In 1984, a long-awaited collaboration between the Four Seasons and the Beach Boys, "East Meets West," was released on FBI Records, owned by the Four Seasons Partnership, but the record did not sell well.

The latest edition of The Four Seasons, including Valli, is conducted a North American tour in the latter half of 2007. Incidental to this tour, the massive 3-CD + 1 DVD box set, Jersey Beat: The Music Of Frankie Valli & The Four Seasons, was released in mid-2007, marketed as the most comprehensive collection of Four Seasons music yet. The album title, Jersey Beat, is a play on both Jersey Boys, a musical play about the Four Seasons that won four Tony Awards, and "Mersey Beat," a reference to the early Beatles music scene alongside the River Mersey in Liverpool, England.

Reissues are excluded. This does not include Frankie Valli solo albums, "solo" or otherwise, except as noted below.

U.S. peak chart position on the Billboard Hot 100 singles chart follows the name. Frankie Valli "solo" singles are also omitted, but can be found here. Only singles that reached a position of #30 or higher on the Hot 100 are listed here.

Retrieved from https://www.newworldencyclopedia.org/p/index.php?title=The_Four_Seasons&oldid=1031322
Categories:
Hidden category:
This page was last edited on 24 January 2020, at 20:38.
Content is available under Creative Commons Attribution/Share-Alike License; additional terms may apply. See Terms of Use for details.