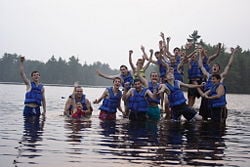 A summer camp is a supervised program for children and teenagers conducted during the summer months. Children and adolescents who attend camp ("campers") participate in a variety of activities, many of which are unique to this non-school period. The term "summer camp" derives from the tradition of holding these programs at campsites. However, the traditional image of summer camp as a woodsy place with hiking, canoeing, and campfires has evolved, with greater acceptance of newer summer camps that offer a wide variety of specialized activities. For example, there are camps for the performing arts, rock music, magic, computers, children with special needs, and weight loss. There are also religious summer camps, such as those run by Jewish organizations and by Evangelical Christian groups.

Summer camps provide not only an educational and enjoyable experience for the young people who attend them as well as providing new opportunities for the development of social relationships in a supervised setting, all of which is helpful to their parents, many of whom may be unable to spend sufficient time supervising their children during the whole summer due to their work schedules.

Campers and staff of Camp Becket-in-the-Berkshires in front of their tent, 1922

Summer camp is the continuation of a tradition since the mid-1800s. Frederick W. Gunn founded the first camp in 1861. Gunn and his wife Abigail operated a small school for boys in Washington, Connecticut, and took the school on a two-week hiking trip. The Gunns operated the Gunnery Camp for 12 more years. Camp Dudley was founded in 1885 and is the oldest continually running boys camp in America.

In most camps, the adult supervisors are called “counselors.” Counselors are responsible for guiding the campers during activities and ensuring the safety of the campers. In many camps, counselors are assigned to smaller groups of campers, called "bunks," "huts," or "cabins," who participate in activities as a group. Counselors often share living accommodations with their bunk. Most counselors are in their late teens or early twenties, as it is an ideal job for high school or college students on summer break. Although counselor jobs usually do not pay well (often minimum wage), counselors receive free room and board, and many take the job primarily for its enjoyable experience.

Summer camp is also known as "sleepaway camp" (American usage) when campers spend their nights at camp. At some camps, all campers stay overnight, and at some camps, so called "day camps," the campers go home each night. Some other camps allow both day and overnight campers. Summer camp is often the first time that children spend an extended period of time away from home. Missing home is a frequent problem, but with caring counselors most campers adjust fairly quickly and benefit from the chance to extend their social relationships.

There are numerous models of camp with an educational focus that cater to students of differing ages and academic interests. Educational summer camps differ from summer schools, as the summer camps may not offer school credit, and often have a significant focus on non-academic activities.

College credit courses are very popular camps that typically offer students the opportunity to explore a pre-college experience. Typically, high school students entering grades 10 through 12 stay in the college dormitories and attend summer classes run by college faculty. At the successful completion of a summer program, course credits are awarded, which in turn are accepted by most tertiary institutions. Many colleges in the United States offer these programs as they serve as an excellent advertisement and introduction to students to encourage them to attend the college as a full time student based upon a memorable summer experience.

Non-college credit courses are focused primarily on education or on educational-related activities, such as debate, history, or journalism. These camps are often run by colleges or universities, and are usually for children in junior or senior years of high school.

SAT Preparation courses (preparing to take a standardized test for college admission in the United States) are also widely popular and offered in various camp programs as a mixture of academic learning with summer fun. Often the SAT preparation is offered as a full morning immersion while the afternoons and evenings are geared towards homework and recreational activities. These camp programs often outsource their SAT component to institutions like Review SAT Prep or Kaplan SAT Prep who provide the teachers and resources.

Enrichment courses are programs that offer a wide range of classes that may have little or no scholastic overlap; however, they are taught with the purpose of broadening the student's understanding and interest in many otherwise unknown areas of study. Students could typically explore subjects like Photography, Community service, Drama, horseback riding, Magic, Scuba diving, Yoga, and so forth.

Jewish summer camps enjoy a long history in the United States.[1] Many of them date to the decades surrounding World War II, as American Jewish community leaders attempted to create a prototypically American setting in which Jewish youth could be immersed in, and learn about, Jewish activities, celebrations, and the Hebrew language.[1]

Jewish educators and community leaders began building and promoting Jewish summer camping during this era, most prominently the Conservative movement's Ramah camps and various camps begun under the auspices of the Reform movement.[1] Other Jewish groups, such as Bnei Akiva and Young Israel soon did the same. Jewish summer camps offer many of the same activities as regular summer camps (arts and crafts, outdoor sports, singing, dancing, and so forth), but also typically include Jewish educational components such as Shabbat, Havdallah, and celebration of Jewish holidays.

Christian summer camps are also very popular. In addition to the non-sectarian YMCA (Young Men's Christian Association) and YWCA (Young Women's Christian Association) camps, numerous churches also run summer camp programs for young people. Generally, their purpose is to provide campers with a place away from worldly things; a chance to study the scriptures and participate in activities with others holding common spiritual values. Campers enjoy activities such as singing, bible lessons, hiking, swimming, sports, crafts, and talent shows. Such camps offer young people a chance to enjoy healthy outdoor activities and to grow stronger in their faith. Some Christian camps are for boys only, some have sister camps for girls only; many are co-educational, with strict separation of accommodations for boys and girls.

Some religious camps also serve as retreat centers. During the school year, they may offer team-building initiatives, spiritual retreats, environmental stewardship retreats, marriage retreats, and alternative spring break trips. Groups include family reunions, youth groups, school classes, ski groups, and others who may use the facilities throughout the year, helping to offset the cost of running the summer youth camps. 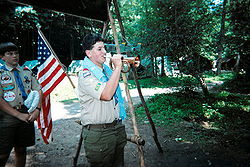 A Scout assembles his troop at a summer camp

Another popular type of camp is scouting camp. These camps are for participants in the Boy Scout and Girl Scout programs. Scout camps are intended to be extensions and offer reinforcement of the values emphasized in the program itself, but giving the participants greater exposure to these values than they would receive in their regular meetings. Some of the values taught in the Boy Scout program—and therefore the Boy Scout camps—include self-reliance, initiative, courage, helpfulness, integrity, and resourcefulness.

Summer camps can be found that offer intensive instruction in almost any sport imaginable, or that offer quality instruction and competition in a wide range of sports. Camps are split into groups of day camps and overnight camps.

Overnight sports camps fall into two groups. The more traditional of these offer boys and girls the chance to learn and play many sports. Sessions are typically three to eight weeks long, and some camps have multiple sessions. While many strong athletes attend these camps, a traditional sports camp program also serves the needs of less proficient athletes. These camps generally focus, through the medium of team sports, on the development of the whole child—not just how they are as an athlete but also how they are as a person, a bunkmate, a teammate, and a friend. Many of these camps include a variety of non-sports programs as well for a more diverse experience.

Many sports camps are of the second type, which focuses almost exclusively on one particular sport. These camps are designed to help each camper acquire skills in that sport that help them gain confidence and improve their chances of making the team when they return to school. Indeed, some campers are helped to be nationally competitive by way of this kind of intensive summer training. Such camps generally run week-long sessions, and some campers may attend more than one even though the curriculum repeats each week. Some single-sport camps offer longer sessions (for example, a wrestling-intensive program may last up to 28 days). Many of the instructors at these camps are coaches of local teams.

Both multi-sport and single-sport camps are run by experienced teachers and coaches (who typically have summers off from their school responsibilities). Cabin staff, instructors, and counselors are typically college athletes. The best sports camps succeed at challenging aspiring athletes both mentally and physically. This is possible in part because many of the counselors attended as campers, and thus there is a vibrant "camp culture" that welcomes new campers into an extended camp "family" and establishes the high standards that incoming campers are encouraged to achieve.

Many camps also bring children of all ages around the world. Some camps are called "adventure camps"—often having a very specific theme. Many of these programs emphasize skill development and personal growth through the adventures offered. These themes can include scuba diving, rock climbing, sailing, and the like.

Weight loss camps are for children and teens to learn about losing weight and maintaining a healthy weight while having a summer camp experience.

Aside from the various theme purposes, the underlying principle in all summer camps is the chance for children to socialize in a structured environment during the summer months off from school. This allows parents to not worry that their children are spending their summers sitting around idly, but are involved in some at least moderately educational activity. Camps also offer parents a temporary reprieve from the often difficult task of parenting and child rearing.

Camps may also give children the opportunity to experience activities that would otherwise not be available to them. Thus, children from urban areas can have an opportunity to enjoy the outdoors and nature, which they may not experience in their everyday life.