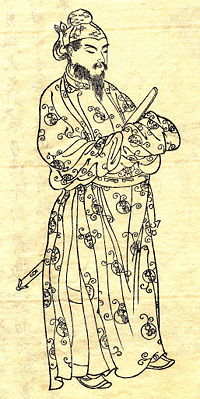 Prince Shōtoku (聖徳太子 c.574-622) was a regent and a politician of the Imperial Court in Japan. This picture was drawn by Kikuchi Yosai （菊池容斎), a Japanese painter.

Prince Shōtoku (聖徳太子, Shōtoku Taishi the Prince of Holy Virtue), original name Umayado, (574-622) was a regent and one of the most outstanding figures in the history of early Japan. His reign marked a turning-point in the cultural and political development of Japan. A precocious child, he read extensively and acquired knowledge and wisdom at an early age. After the Soga clan defeated the Mononobe clan in a bloody struggle and Empress Suiko ascended the throne in 592, Shōtoku was appointed heir apparent in place of her own sons. He married her daughter, Princess Udodonokaidako, and acted as the ruler of Japan until his death in 622.

Shotoku is a legendary figure in ancient Japanese historical records such as the Nihon Shoki and the Kojiki, which describe how he established a centralized government and harmonized warring political factions. Shotoku admired and adopted elements from the culture of continental Asia, such as the Chinese practice of distinguishing official ranks by the wearing of special caps, the first formal differentiation of governmental roles in Japan. In 604, Shotoku issued the Seventeen-Article Constitution, a collection of written maxims known as the first written law of Japan. Shotoku helped to establish Buddhism in Japan, personally supervising the construction of a number of Buddhist temples including the Shitennoji Temple and possibly the Horyuji temple, and inviting Buddhist priests and Confucian scholars from Korea. He also invited writers, artisans, sculptors, temple builders, and artists, initiating the first flowering of continental Asian culture in Japan. A letter written in 607 by Shotoku to the Emperor of China, Emperor Yang of Sui, contains the first written use of the name "Nihon," the modern name for Japan.

Shotoku was born in 574 in Japan, the second son of Emperor Yōmei and Empress Hashihito no Himemiko (穴穂部間人皇女) and nephew of Emperor Shushull. His parents were children of Emperor Kimmei (欽明天皇, 509-571 ) by different mothers. His father, Emperor Yomei, referred to as Tachibana no Toyohi no Mikoto (橘豊日尊) in the Nihonshoki, as Prince Ōe (大兄皇子 Ōe no Miko, crown prince), and Prince Ikebe (池辺皇子 Ikebe no Miko) after the town in which he lived, acceded to the throne after the death of his half brother, Emperor Bidatsu. According to legend, Shotoku’s mother bore him unexpectedly and with no labor pains while conducting a routine inspection of the imperial stable. Since he was born in front of a stable, he was christened Umayado no ōji (厩戸皇子, the prince of the stable door). Some scholars, however, are of the opinion that the name “Umayado” came from a place named “Umayato,” near his birth place.

As a small child, Shotoku already demonstrated an exceptional intellect, and read extensively at an early age. According to legend, he could speak when he was born and never made a wrong decision. One anecdote relates that he once listened to eight people pleading with him simultaneously and understood every word. Another of his names, Yatsumimi no Miko (Prince of Eight Ears, 豊聡耳) is derived from this episode. His father Yomei loved his son so profoundly that he housed him in a special part of the palace known as the Jogu, or Upper Palace, and from this circumstance came a third name, Kamitsumiya no Miko or Jogu Taishi (Prince of the Upper Palace In the Kojiki, his name appears as Kamitsumiya no Umayado no Toyosatomimi no Mikoto (上宮之厩戸豊聡耳命).

When Shotoku was thirteen years old, his uncle Emperor Bidatsu (敏達天皇, reigned 572-585) died, provoking a bloody struggle for royal succession between the heads of the Soga clan (蘇我氏 ), who favored Oeno Oji (Prince Oe, father of Shotoku), and the Mononobe clan (物部氏) who supported Anahobe no Miko as the new sovereign. Finally Prince Oe was victorious, and ascended the throne in September of 585 as Emperor Yōmei (用明天皇), the thirty-first emperor of Japan. Yomei soon became seriously ill, and Shotoku, who was by now a devout Buddhist, sat by his bed day and night, praying for his recovery.

The death of Emperor Yomei in 587 sparked another struggle between the Sogas and the Mononobes, ending in the killings of Prince Anahobe and Mononobe no Moriya at the hands of the Soga troops. Shotoku was involved in this campaign and prayed to Shi-Tenno (Four Heavenly Guardians of Buddhism) for victory; afterward he erected the Shitennoji Temple. Prince Hasebe, a son of one of Soga no Umako's younger sisters, ascended the throne as Emperor Sushun. Soon a strong animosity developed between the Emperor and his over-bearing uncle, Umako, and after reigning for only four years, Emperor Sushun (崇峻天, reigned 588-592) was assassinated by one of Umako's retainers.

Following the traditional order of succession, Princess Sukiya-hime ascended the throne as Empress Suiko, ( 推古天皇 , 554-628), the first known woman to hold this position. Soga no Umako nominated, as heir apparent and regent, not one of her sons, but Prince Shotoku. It is believed that Umako recognized Shotoku's leadership qualities and thought it prudent to keep him on the Soga side. He married Princess Udodonokaidako, daughter of Empress Suiko, and from then until his death, Shotoku acted as the actual ruler of Japan.

Cap Ranks and the Seventeen-Article Constitution

According to the Nihon Shoki, Shotoku succeeded in establishing a centralized government during his reign. Shotoku, who was interested in mainland Asian cultures, adopted the Chinese practice of distinguishing official ranks by the wearing of caps made of specific designs and materials, and in 603 established a system of twelve “cap ranks.” The introduction of this cap system marks the beginning of formal differentiation of governmental roles in Japan. The twelve ranks were: Dai-toku (greater virtue), Sho-toku (lesser virtue), Dai-nin (greater humility), Sho-nin (lesser humility), Dai-rei (greater decorum), Sho-rei (lesser decorum), Dai-shin (greater faith), Sho-shin (lesser faith), Dai-gi (greater righteousness), Sho-gi (lesser righteousness), Dai-chi (greater knowledge), and Sho-chi (lesser knowledge). Shotoku also formalized the first lunar calendar in Japan, adopting the calendar system used on the Chinese continent and taught to the Japanese by a Korean priest, Kanroku.

In 604, Shotoku distributed to his officials the famous Seventeen-Article Constitution, a collection of written maxims known as the first written law of Japan. (Some modern scholars question whether Shotoku was the real author of the Seventeen-Article Constitution, because of differences in style.) Many of the moral commandments were derived from the Analects of Confucius and other Confucian works, but Buddhism was named as the supreme faith.

The first of the seventeen articles upheld the virtue of wa, or concord or harmony. The constitution also included articles emphasizing the supremacy of the imperial throne, defining the duties of ministers, forbidding provincial authorities to levy taxes, and admonishing them to use forced labor only "at seasonable times."

Shotoku was a proponent of Buddhism, and commissioned the Shitennoji Temple from its original site at Tamatsukuri to its present location in Naniwa province (present-day Osaka) in his very first year as the prince regent. The following year, he issued a call for the worship of the three treasures: Buddha, Buddhist teachings, and priesthood. In 595, two Korean high priests, Eji from the kingdom of Koryo (Koma) and Eso from the kingdom of Paekche (Kudara), arrived in Japan. Prince Shotoku became a disciple of Eji and formally received the Buddhist commandments from him. Shotoku studied them, wrote commentaries on three Buddhist sutras, Hokke, Yuima, and Shoman, and personally supervised the construction of a number of Buddhist temples. Documents at Horyu-ji Temple claim it was founded by Suiko and Shōtoku in 607, but archaeological facts do not support this. Shotoku’s support ensured the establishment of Buddhism in Japan, so that it was practiced alongside the original Japanese religion of Shinto.

Under Shotoku’s sponsorship, sculptors, temple builders, artists, tilers, and other artisans were invited from Korea. Shotoku also invited Confucian scholars to Japan, including Kakuga (or Doctor Kak-ka), under whom the prince studied Confucian classics. Buddhist and Confucian teachings spread simultaneously, and Japan experienced a flowering of culture. This first flowering of the Asian continental culture in Japan is called the Asuka period, after the Asuka district in which the capital was located.

When Emperor Yang of Sui received this letter, he became angry because Shotoku had addressed him as an equal.