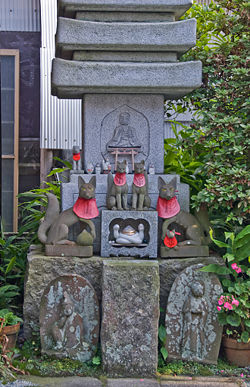 Foxes sacred to Shinto kami Inari, a torii, a Buddhist tower, and Buddhist figures together at Jōgyō-ji, Kamakura

Shinbutsu shūgō (Japanese for the "fusion of kami and Buddhas") refers to a form of cultural-religious syncretism that arose in Japan, which blends Buddhist practices with the local religious rituals of Shintoism. When Buddhism was introduced into Japan through China in the late Asuka period (sixth century), the Japanese tried to reconcile it with their old belief system, Shintoism, assuming both were true. As a consequence, Buddhist temples were attached to local deity shrines and vice versa. The depth of the resulting influence of Buddhism on the local religion can be seen for example in the fact that the common type of shrine seen today, with a large worship hall and images, is itself of Buddhist origin and not indigenous Shinto.

Shinbutsu shūgō represents an effort to harmonize the rituals and practices of two different world religions, which reflects the Asian emphasis on the interconnectedness of nature and the cosmos.

The relationship between Buddhism and Shintoism in Japan is complex and at least two distinct views on Japanese history can be adduced: On the one hand, the Shinto establishment states that Shinto is the indigenous religion of Japan and that it has existed as such continuously since pre-history.[1]The term "Shinto" itself was coined in the sixth century to differentiate the loosely organized local religion from imported Buddhism.[1] This is the concept normally accepted by most Japanese historians.[2] On the other one finds the position of Japanese specialist Toshio Kuroda (and his supporters) who, in a famous article ("Shinto in the History of Japanese Religion," published in English in 1981) has argued that Shinto as an independent religion was born only in the modern period after emerging in the Middle Ages as an offshoot of Buddhism.[2][3] Kuroda's main argument is that Shinto, as a distinct religion, is a Meiji era invention of Japanese nationalist ideologues.[2] He contends that the state formalization of kami rituals and the state ranking of shrines during the Heian period were not the emergence of Shinto as an independent religion, but an effort to explain local beliefs in Buddhist terms.[2] He adds that despite the fact that the two characters for "Shinto" appear very early in the historical record, for example in the Nihon Shoki, it does not mean that today's Shinto already existed as a religion because the characters were originally used as a name for Daoism or even for religion in general.[2] Indeed, according to Kuroda many features of Shinto, for example the worshiping of mirrors and swords or the very structure of Ise Shrine (Shinto's holiest and most important site) are typical of Daoism.[2] The term "Shinto" in old texts, therefore, does not necessarily indicate something uniquely Japanese.[4]

According to the first view, then, the two religions were at the time of their first meeting already formed and independent and thereafter coexisted and fused, while, according to the second view, Buddhist interaction with local beliefs in Japan, actually produced today's Shinto. In either case, it can be said that the fusion of Buddhism with the local kami in Japan, provoked a strong reaction as seen by Mononobe no Okoshi's statement that, "The kami of our land will be offended if we worship a foreign kami."[5][6]

In other words, Mononobe saw Buddha as just another kami, and not as a different kind of God possibly different in nature from his own.[6] Foreign kami were called banshin (蕃神, "barbarian gods") or busshin (仏神, "Buddhist gods"), and understood to be more or less like local ones.[7] Initially, therefore, the conflict between the two religions was political, and not religious, in nature, a struggle between the progressive Soga clan, that wanted a more international outlook for the country, and the conservative Mononobe clan, that wanted the contrary.[6] Buddhism was not passive in the process, but was itself ready to assimilate and be assimilated. By the time it entered Japan it was already syncretic, having adapted to and amalgamated with other religions and cultures in India, China and Korea.[7] Already while flourishing in India, it had absorbed Hindu divinities like Brahma (Bonten in Japanese) and Indra (Taishakuten).[7] When it arrived in Japan, it already had a disposition towards producing the combinatory gods that the Japanese would call shūgōshin (習合神, shūgōshin).[7] Searching for the origins of a kami in Buddhist scriptures was felt to be nothing out of the ordinary.[7]

However, if Buddhist monks doubted the existence of many kami, they certainly saw them as inferior to their Buddhas.[8] Hindu gods had already been treated analogously: they had been thought of as unilluminated prisoners of samsara (cycle of rebirth).[8] Buddhist claims of superiority encountered resistance, and monks tried to overcome them by deliberately integrating kami in their system.[8] Several strategies to do this were developed and deployed.[8]

The process of historical amalgamation of Buddhism and Shintoism is usually divided in three stages:[9]

Shinto and Buddhism—Development of Shinbutsu Shūgō (Combinatory Religion of Kami and Buddhas). Encyclopedia of Shintoism. accessdate December 9, 2008. (in English)