Schönbrunn Palace in Vienna is one of the most important cultural monuments in Austria and one of Europe's most popular tourist attractions. UNESCO cataloged it as a World Heritage Site, as a remarkable Baroque example of synthesis of the arts. The palace and gardens illustrate the tastes, interests, and aspirations of successive Habsburg monarchs.

Schönbrunn was built to be on a par with the Palace of Versailles in terms of Baroque beauty as well as cultural and political significance, but the House of Habsburg did not have the resources to outdo its French rival. In earlier times, Schönbrunn served as the summer place of residence for the various Habsburg rulers, who used it as a base to exert their power across Europe. Emperor Franz Joseph (ruled: 1848-1916), was born there in 1830 and spent the last years of his life exclusively in Schönbrunn. In 1918, the palace became the property of the new Austrian republic. 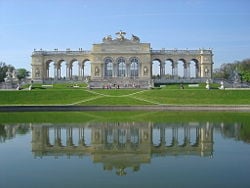 The Gloriette, located behind the palace 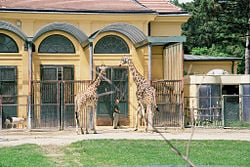 The giraffe house at the current Tiergarten Schönbrunn.

In the year 1569, Holy Roman Emperor Maximilian II purchased the Katterburg, located on a large area between Meidling and Hietzing, where today Schönbrunn's parks and various buildings are situated. He showed interest in the newly founded zoo, known as the Tiergarten Schönbrunn, and tried to establish not only a systematic maintenance of wild animals, but also a plantation of rare and exotic plants. Maximilian II is justifiably called the creator of Schönbrunn's garden arrangement.

The new name, Schönbrunn ("beautiful well"), has its roots in a well from which water was consumed by the royal court in Vienna. During the next century many members of the royal family of Austria spent their summer vacations and hunting excursions in the Katterburg. In the days of the Turkish sieges, the Katterburg was nearly destroyed and it appeared to be impossible to restore the castle. 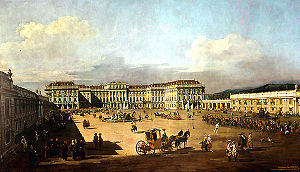 Schönbrunn from the front side, by Canaletto, 1758

Emperor Leopold I gave architect Johann Bernhard Fischer von Erlach the order to design a new palace. His first draft was a very utopian one, dealing with different antique and contemporary ideals. His second draft showed a smaller and more realistic building. Construction began in 1696, and after three years the first festivities were held in the newly built, middle part of the palace. 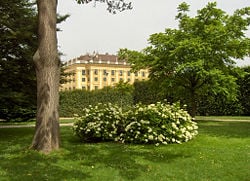 The palace, as seen from the gardens

Not many parts of the first palace survived the next century because every emperor added or altered a bit on the inner and outer parts of the building. Schönbrunn today looks much as Empress Maria Theresa conceived it. Done in "Maria Theresa ochre," with delicate rococo touches designed for her by Austrian Nikolaus Pacassi, the palace is in complete contrast to the grim, forbidding Hofburg. Schönbrunn was the imperial summer palace during Maria Theresa's 40-year reign, and it was the scene of great ceremonial balls, lavish banquets, and fabulous receptions held during the Congress of Vienna. At the age of six, Mozart performed in the Hall of Mirrors before Maria Theresa and her court. The empress held secret meetings with her chancellor, Prince Kaunitz, in the round Chinese Room.

At the end of the so-called Theresian epoch, Schönbrunn Palace was a vigorous center of Austria's empire and the imperial family.

In the nineteenth century, one name was closely connected with Schönbrunn's: Emperor Franz Josef I of Austria who was born within the palace walls. Schonbrunn Palace was the setting for the lavish court life associated with his reign, and he spent the final years of his life here. Through the course of his reign, Schönbrunn Palace was seen as a Gesamtkunstwerk (total work of art) and remodeled in accordance with its history. He died on November 21, 1916 in his sleeping room.

The last of the Habsburg rulers, Karl I, signed a document there on November 11, 1918, renouncing his participation in affairs of state—not quite an abdication, but tantamount to one. Allied bombs damaged the palace during World War II, but restoration has removed the scars. 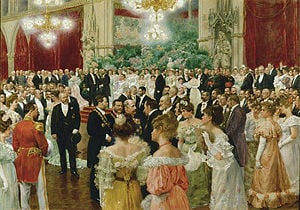 After the downfall of the monarchy in 1918, the newly founded Austrian Republic became the owner of Schönbrunn Palace and preserved the beautiful rooms and chambers as a museum for the visitors. In the twentieth century, the palace was used several times for important events such as the historical meeting between John F. Kennedy and Nikita Khrushchev in 1961. UNESCO placed Schönbrunn Palace on the World Cultural Heritage List in 1996.

There are English language-guided tours through many of the palace rooms. Thus, an opportunity is provided to see the exquisite apartments of Maria Theresa, her sitting rooms, bedroom, and the parlor in which the six-year-old Mozart used to play for the Empress. Also can be seen are the parlors and apartments of Imperial couple Franz Joseph and his queen, Sissi. Many of Schonbrunn's 1441 room are festooned with frescoed ceilings, crystal chandeliers, huge mirrors, and gilded ornaments.

The State Apartments are the most remarkable display in the palace. Much of the interior ornamentation is in the rococo style, with red, white, and 23 ½-karat gold being the predominant design feature. Of the 40 rooms that can be visited, particularly compelling is the Room of Millions, decorated with Indian and Persian miniatures—a truly grand rococo salon.

Also on the grounds is the baroque Schlosstheater (Palace Theater), which stages lively, summer performances. Marie Antoinette appeared on its stage in pastorals during her happy youth, and Max Reinhardt, the theatrical impresario, launched a well-known acting school here.

The Wagenburg (Carriage Museum) is also a tourist attraction, showcasing a fine display of imperial coaches from the seventeenth to twentieth centuries. The coronation coach of Charles VI (1711-40), which was pulled by eight white stallions, is here. It was also used for several subsequent Habsburg coronations. 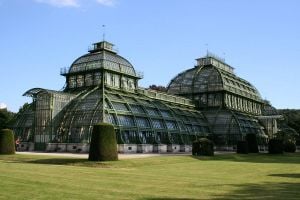 The park at Schönbrunn Palace was opened to the public around 1779 and since then has provided a popular recreational area for the Viennese population and international visitors alike. Extending for three-quarters of a mile from east to west and approximately .62 miles from north to south, it was placed together with the palace on the UNESCO list of World Heritage Sites in 1996.

The palace grounds are as magnificent as the palace, with a Tirolian garden, complete with original hut, orchard, and pasture farms. There is also a palm house with three climate zones, including plants brought in from rain forests from all the continents. The palace complex includes sets of faux Roman ruins, staple luxuries of European palaces of its type. 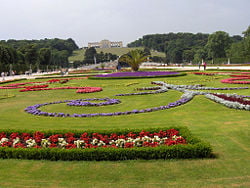 The gardens and gloriette

The Gloriette, a marble summerhouse topped by a stone canopy with an imperial eagle, embellishes the palace's Imperial Gardens. The so-called Roman Ruins (a collection of marble statues and fountains) date from the late-eighteenth century, when it was fashionable to simulate the ravaged grandeur of Rome. Adria van Steckhoven laid out the park, which contains many fountains and heroic statues, often depicting Greek mythological characters.

A public maze is located in the wide gardens of Schönbrunn Palace. A fee allows entrance to the maze, as well as to a set of other outdoor puzzles, including a math game and a series of fountains.

The sculptures in the Schönbrunn garden were generally made between 1773 and 1780 under the the direction of William Beyer. During the execution, many sculptors were employed, among them Johann Baptist Hagenauer.

Sculptures in the Schönbrunn Garden

Retrieved from https://www.newworldencyclopedia.org/p/index.php?title=Schonbrunn_Palace&oldid=1097837
Categories:
Hidden category:
This page was last edited on 25 January 2023, at 17:21.
Content is available under Creative Commons Attribution/Share-Alike License; additional terms may apply. See Terms of Use for details.