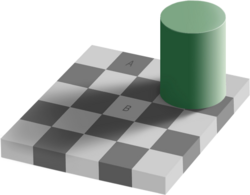 Squares A and B have the same color. 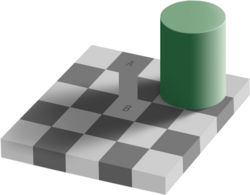 A rectangle of the same color has been drawn connecting the two squares.

The same color illusion (also known as Adelson's checker shadow illusion, checker shadow illusion and checker shadow) is an optical illusion in which identical shades of gray appear to be different. This illusion is one of many illustrations of the complexity of our visual perception. The attributes of the physical visual stimulus affect the complex processes in both our physiological (of the body) and cognitive (of the mind) systems that result in our interpretation, in this case misinterpretation, of the actual figure. Study of this illusion aids in our understanding of the nature of lightness computation in the human visual system, and thus increasing our understanding of how our minds function in informing us about the environment. This type of illusion also is reminds us that human nature has endless creativity and appreciation for novelty.

The same color illusion was first published in 1995 by Edward H. Adelson, Professor of Vision Science at Massachusetts Institute of Technology (MIT).[1]

The same color illusion shows what appears to be a checkerboard made of dark and light gray squares. Resting in one corner of the checkerboard is a green cylinder that casts a shadow diagonally across the middle of the board. Two of the squares on the board are labeled "A" and "B." When studying the image, square A appears markedly darker than square B, even though they are the exact same shade of gray. If one removes the image surrounding the two squares (or covers it over with a paper), it is clear that they are the same shade.

This illusion is seen on checkerboard patterns in a variety of forms, including what Adelson calls the "corrugated Mondrian." A mondrian is an array of randomly colored, randomly placed rectangles covering a plane surface, and illuminated non-uniformly. In the illusion, it takes the form of a mondrian array drawn to look like a checkerboard painted on a three-dimensional structure, revealing further complexity to our perception.[2]

The two As are the same color.

When looking at the image, the brain and visual system interprets it as a three dimensional image. When interpreting scenes in real life, the visual system has techniques that compensate for different lighting and shadows, enabling us to better interpret objects as they actually exist. There are several specific aspects that contribute to the remarkable success of this illusion.

To further complicate matters, the figure is not actually of a checkerboard with alternating light and dark squares in a consistent pattern of alternation in the rows and columns but same color on the diagonal. However, our brain interprets the pattern that way, with the result that although the two gray squares in the same color illusion are actually the same color, their location in the apparent checkerboard implies that one should be dark and the other light to maintain the assumed pattern. The Gestalt psychologists emphasized the importance of this type of perceptual organization, based on such key concepts as grouping, belongingness, good continuation, proximity, and so on.

Finally, the shadow of the cylinder has soft edges. The visual system tends to ignore gradual changes in light level, focusing instead on sharp edges. Additionally, certain colors such as gray, green, and yellow are more difficult for the visual system to judge accurately. Often, cues for these colors are taken from the surrounding context. As can be seen in the same color illusion, when the context is removed, it is obvious that the two gray squares are the same shade.[3]

Illusions of lightness and brightness can help reveal the nature of lightness computation in the human visual system. The same color illusion aptly demonstrates why it is so important to verify what may seem like obvious assumptions when conducting scientific experiments. The human eye and brain can be easily fooled into misinterpretations, which could affect the results of any number of scientific inquiries.

Equally, artists can make use of the sophisticated interpretations that observers make to produce particular lighting effects in their works.

Retrieved from https://www.newworldencyclopedia.org/p/index.php?title=Same_color_illusion&oldid=1092609
Categories:
Hidden category:
This page was last edited on 23 December 2022, at 02:09.
Content is available under Creative Commons Attribution/Share-Alike License; additional terms may apply. See Terms of Use for details.