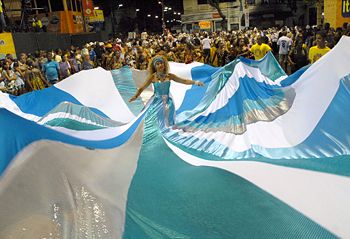 Samba is one of the most popular forms of music in Brazil and is widely viewed as Brazil's national musical style. The name samba probably comes from the Angolan semba (mesemba), a type of ritual music. Samba emphasizes give and take between the dancers and the musical instruments leading toward a profound harmony and cooperation between the arts of dance and music.

Developed in the shanty-towns of urban Rio De Janeiro samba became the focus of neighborhood associations known as "samba schools" and a major feature in Rio's festive Carnival parades. The samba style is a smooth, duple-metered flow which was introduced to the United States by Carmen Miranda in the late 1930's. It was further popularized in the U.S., especially in the form of bossa nova, by the Stan Getz hit The Girl From Ipanema.

The samba is a musical demonstration of the historical partnership between movement and sound to create a mutually fulfilling accord. 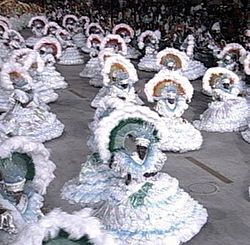 Samba performers at the Rio Carnival

Samba's roots can be traced to Africa, namely Angola, where the semba dance was apparently the predecessor of samba. After migrating to the Americas with the slave trade, samba gradually evolved and eventually developed as a distinctive kind of music at the beginning of the twentieth century in Rio de Janeiro, then the capital of Brazil, under the strong influence of the immigrant black population from the Brazilian state of Bahia.

The first well known samba recording was "Pelo Telefone" (1917), by Mauro Almeida and Donga. Its great success carried the new genre outside the black shanty towns known as favelas. In the 1930s, a group of musicians led by Ismael Silva founded the first samba school, Deixa Falar, in the neighborhood of Estácio de Sá. They transformed the musical genre to make it fit better in the Carnival parade. The term samba school was also adopted by larger groups of samba performers in an attempt to lend wider acceptance of samba and its performance. Local school campuses were often the practice and performance grounds for these musicians and dancers. The escola tradition thus gave early performers a sense of legitimacy and organization to offset samba's sometimes controversial social atmosphere. Through the radio the genre's popularity spread all around the country, and with the support of the nationalist administration of Getúlio Vargas, samba became Brazil's "official music."

Brazilian samba singer, Carmen Miranda is often thought of as being the first to popularize Samba in the United States, although the Broadway musical, Street Carnival which opened in the 1920s, included samba music. Some criticized her for trivializing the samba in Hollywood, but she remained a popular entertainer and her career in film did a great deal to introduce American audiences to samba music. 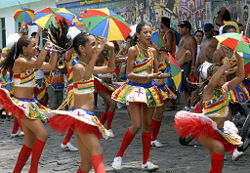 In the following years, samba music developed in several directions, from the gentle samba-canção to the powerful drum orchestras which accompany the Carnival parade. One of these new styles was the bossa nova, which gained worldwide popularity through the works of João Gilberto and Antonio Carlos Jobim, among others, and arrived in North America via Gilberto's albums with American jazz saxophonist Stan Getz, and Jobim's soundtrack to the 1959 film Black Orpheus.

The Getz album Jazz Samba brought the influence of bossa nova and samba to American jazz musicians. The bossa/samba influence garnered Getz the Grammy Award for Best Jazz Performance of 1963 for the seminal tune "Desafinado." Getz would score another jazz landmark with the highly popular bossa nova hit, The Girl From Ipanema in which the music was composed by Brazilian icon, Antonio Carlos Jobim.

In the 1960s, Brazil became politically divided, and leftist musicians of bossa nova started to gather attention for the music made in the favelas. Many popular artists were discovered at this time. Names like Cartola, Nelson Cavaquinho, Velha Guarda da Portela, Zé Keti, and Clementina de Jesus recorded their first albums. In the 1970s, samba returned to the air waves with composers and singers like Martinho da Vila, Clara Nunes, and Beth Carvalho dominating the hit parade. Various sub-genres of samba evolved in the succeeding decades (see below), and although samba lost ground in the 80s to such trends as disco and Brazilian rock, it experienced a resurgence in the 90s and remains one of Brazil's most popular music forms today.

Samba is also very popular in Japan, especially in its more traditional forms; so much that some sambistas like Nelson Sargento, Monarco, and Wilson Moreira have recorded specifically for the Japanese market and spent a lot of time on tours to that country.

Samba is characterized by a rhythm section containing the main beat, usually a surdo (bass drum) or tantan. Another important element is the cavaquinho, a small, four-stringed instrument of the guitar family similar to the ukelele, or cavaco. The cavaquinho provides the connection between the harmony section and the rhythm section; its presence usually differentiates classic samba from softer variations such as bossa nova. However, some samba recordings do not use the cavaquinho, including many by Chico Buarque.

The pandeiro (tamborine drum) is the most present percussive instrument, whose beat is the most "complete." A violão (acoustic guitar) is also usually present, and its use in samba popularized the 7-string variation, because of the highly sophisticated counterpoint lines used in the genre in the lower pitched strings.

Samba lyrics range from love songs, to futbol (soccer), politics, and many other subjects.

This phrase describes a type of samba which is characterized by a highly percussive pandeiro beat, with use of the palm of the hand in the center of the instrument for snaps. Partido alto harmony is always in a major key. Usually played by a set of percussion instruments (surdo, pandeiro, tamborim) and accompanied by cavaquinho and/or violão, partido alto is commonly divided in two parts, a chorus and the verses. Partideiros (partido alto musicians) often improvise on the verses, with disputes being common, and highly skilled improvisers have made their fame and career on samba, as Zeca Pagodinho, who is not only a great overall sambista but one of the best improvisors.

This is a now virtually defunct type of samba that had as the distinctive feature being interpolated with spoken sections, often dialogues. Singers had to have an excellent vocal gift, as well as ability to make different voices. Lyrics usually told stories and were generally humorous. Its most famous practitioner was Moreira da Silva

This radio-friendly romantic and slower variation was mostly the Brazilian counterpart to popular Latin American rhythms like the tango or bolero, both very popular in Brazil until the 1960s. Themes ranged from lyrical to tragical. Famous artists in this genre included Ângela Maria, Nélson Gonçalves, Cauby Peixoto, Agnaldo Rayol.

A samba-enredo is a song performed by a samba school during its yearly Carnival parade. The term also refers to a particular style of samba music typical of such songs. Samba-enredo is well known internationally due to Rio de Janeiro's longstanding status as a major tourist destination during Carnival and to the fact that many percussion groups have formed around the world inspired by this type of samba.

Sambas-enredo are recorded and played on the radio during the period leading up to Carnival. They are generally performed by male vocalists accompanied by cavaquinho and a large bateria (percussion group) producing a dense, complex texture known as batucada. They heavily emphasize the second count of the measure driven by the bass notes of the surdo drums.

Rio de Janeiro's baterias have provided inspiration for the formation of percussion groups around the world, especially in Western countries. These groups generally do not use vocals or cavaquinho, focusing instead on percussion grooves and numerous breaks. These groups operate year round, unlike in Brazil where activity is now confined to the months preceding Carnival. 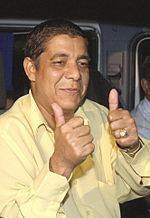 This is the most widespread form of samba in Brazil today. It started as a movement in the 1980s where three new instruments were introduced with Grupo Fundo de Quintal and others at Cacique de Ramos: The tantan—a more dynamic surdo, a small banjo (with the same dimensions and tuning as the cavaquinho), and the repique de mão—a hand kettle drum used for percussive turnarounds. Usually sung by one singer and accompanied by cavaquinho, violão, and at least one pandeiro, pagode is sung at many parties and informal meetings, being almost universally found at open-air bars and cafés. Lyrics are playful, usually dealing love or some form of hilarity. Famous pagode artists include Grupo Fundo de Quintal, Leci Brandão, Jorge Aragão, Almir Guineto, Zeca Pagodinho. Samba dancers at the Helsinki Samba Festival in Helsinki, Finland

Although samba was eclipsed in Brazil by the popularity of disco and Brazilian rock, since the 1980s Samba reappeared in the media with a musical movement created in the suburbs of Rio de Janeiro. This was the pagode, a renewed samba, with new instruments—like the banjo and the tantan—and a new language that reflected the way that many people actually spoke with the inclusion of heavy gíria (slang).

Today, the samba remains as one of the most popular musical genres in Brazil, and has also found its way into many other forms of music throughout the world.