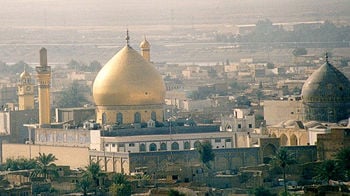 Samarra's Golden Mosque before it was bombed

Sāmarrā (Arabic,سامراء) is a town in Iraq that in ancient times may have been the world's largest city. With its majestic mosques, gardens, and ruins of royal palaces extending 5.6 miles by 21.1 miles along the Tigris River, Samarra is one of four Islamic holy cities in Iraq. The home to a population of around 200,000, it stands on the east bank of the Tigris in the Salah ad Din Governorate, 60 miles north of Baghdad.

From the time it was built by Caliph Al-Mu'tasim in 836 C.E. to replace Baghdad as the capital of the Abbasid Caliphate, until it was abandoned by Caliph Al-Mu'tamid in 892 C.E., Samarra was the most important center in the Muslim world. Its Great Mosque was the largest Mosque in the world at the time. Despite the short stay of the Abbasid Caliphate in Samarra, the city's artistic, literary, and scientific splendors have remained an important part of Arab and Islamic history.

Medieval Islamic writers believed that the city's name was derived from the Arabic phrase, “Sarre men ra’a”—سر من رأى—which translates to “A joy for all who see.” It was changed later by Armenian soldiers to "Samarra"—ساء من رأى—which means "A sadness for all who see."

Today, Samarra is a trade center of its region, and has some industry and small crafts production, as well as local administration. On February 22, 2006, a powerful explosion shattered the dome of Samarra's Al-Askari Golden Mosque, one of Iraq's most revered Shiite shrines, setting off a day of sectarian fury in cities and towns across Iraq.

In 2007, UNESCO named Samarra one of its World Heritage Sites.[1] Map shows the location of Samarra northwest of Baghdad on the banks of the Tigris River.

Samarra was heavily occupied in ancient times during the Chalcolithic Samarran Culture (c. 5500–4800 B.C.E.) identified at the site of Tell Sawwan, where evidence of irrigation and flax production establishes the presence of a prosperous settled culture with a highly organized social structure. The culture is primarily known by its finely made pottery decorated against dark-fired backgrounds with stylized figures of animals, birds, and geometric designs. This widely exported type of pottery was one of the first widespread, relatively uniform pottery styles in the Ancient Near East. The Samarran Culture was the precursor to the Mesopotamian culture of the Ubaid period.

The city of Sur-marrati—re-founded by the Assyrian King Sennacherib in 690 B.C.E. according to a stele currently in the Walters Art Gallery, Baltimore—is identified with a fortified Assyrian site at al-Huwaysh, on the Tigris opposite modern Samarra.

The possibility of a larger population came with the opening of the Qatul al-Kisrawi, the northern extension of the Nahrawan canal that drew water from the Tigris in the region of Samarra. This work was attributed by Yaqut to the Sassanid king Khosrau I Anushirvan (531–578 C.E.). To celebrate the completion of this project, a commemorative tower (modern Burj al-Qa'im) was built at the southern inlet south of Samarra, and a palace with a "paradise," or walled hunting park, was constructed at the northern inlet (modern Nahr al-Rasasi) near to al-Daur. A supplementary canal, the Qatul Abi al-Jund, was created by the Abbasid Caliph Harun al-Rashid and a planned city was laid out in the form of a regular octagon, but he abandoned it unfinished in 796 C.E. 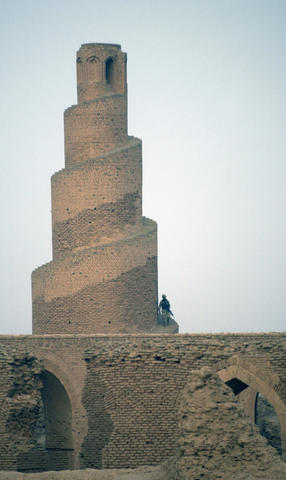 A U.S. soldier descends the Malwiya Tower, a spiral minaret, part of the Great Mosque of Samarra, once the largest mosque in the world.

The capital of the Abbasid caliphate was moved from Baghdad to Samarra in 836 C.E. by Caliph Al-Mu'tasim after the population of Baghdad grew riotous under the oppression of the caliphate's foreign slave soldier, known as Mamluk. During this time the original pre-Islamic settlement was replaced with a new city established in 833 C.E. Samarra would remain the official center of the Muslim world until 892 C.E. when the capital was returned to Baghdad by al-Mu'tamid. Al-Mu'tasim's successor, al-Wathiq, developed Samarra into a commercial city, and it was further developed under Caliph Al-Mutawakkil.

The latter sponsored the construction of the Great Mosque of Samarra with its spiral minaret or malwiyah, built in 847 C.E. He also laid out parks and a palace for his son Al-Mu'tazz. Under the rule of Al-Mu'tadid, the Abbassid capital was shifted back to Baghdad and Samarra entered a prolonged decline, which accelerated after the thirteenth century when the course of the Tigris shifted.

The Great Mosque of Samarra was at one time the largest mosque in the world. Its minaret, the Malwiya Tower, is a vast spiraling cone 52 meters high and 33 meters wide with a spiral ramp. The mosque had 17 aisles and its walls were paneled with mosaics of dark blue glass. On April 1, 2005, the top of the minaret was damaged by a bomb. Insurgents reportedly attacked the tower because U.S. troops had been using it as a sniper position. 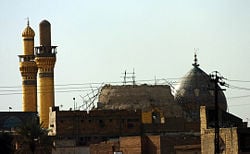 The Al-Askari (Golden) Mosque after being bombed in 2006

The city is also home to the Al-Askari Mosque—also called the Golden Mosque—containing the mausoleums of the Ali al-Hadi and Hasan al-Askari, the tenth and eleventh Shi'a Imams, respectively. It also contains the sacred shrine of Muhammad al-Mahdi, known as the twelfth, or "Hidden Imam," destined to return to as the Mahdi in the Shi'a tradition. This has made it a central pilgrimage center for Shi'a Muslims of the "Twelver," sect, estimated to comprise 80 percent of Shi'as.

In addition, Hakimah Khatun and Narjis Khatun, female relatives of the prophet Mohammad, held in high esteem by Shi'a and Sunni Muslims alike, are buried there, making this mosque one of the most significant sites of worship for Shi'a and a venerated location for Sunni Muslims. Samarra's native population is believed to be largely descended from a lineage related to these saints, although most of these citizens of Samarra are Sunnis who do not share the same religious tradition of the Shi'a. 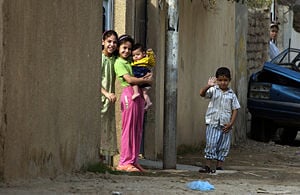 Children in a Samarra neighborhood

During the twentieth century, Samarra gained new importance when a permanent body of water (Lake Tharthar) was created near the town by damming the river in order to end the frequent flooding of Baghdad downstream. Many local people were displaced by the dam, resulting in a big increase in Samarra's population.

Samarra is currently a key city in Salahuddin province, a major part of the so-called Sunni Triangle where insurgents have been active since shortly after the 2003 invasion by the United States. Though Samarra is famous as a site of Shi'a holy sites, including the tombs of several Shi'a Imams, the town is dominated by Sunnis. This has caused tensions, particularly since the 2003 invasion of Iraq. 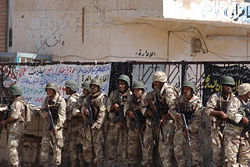 Iraqi National Guard soldiers prepare to enter the Al Askari Mosque on Oct. 1, 2004 after it had been seized by insurgents.

When Saddam Husein was in power, he forbade pilgrimages to Shi'a holy sites, fearing that large gatherings would quickly turn into political uprisings. Such religious activities resumed only after his downfall in 2003, in an attempt to establish the principle of religious freedom for all Iraqis.

On February 22, 2006, the golden dome of the Al Askari Mosque was destroyed by bombs, setting off a period of rioting and reprisal attacks across the country which claimed hundreds of lives. No organizations have claimed responsibility, however it is believed that the Sunni Islamist Mujahideen Shura Council, or groups sympathetic to its cause, were behind the attack. Some in the Islamic world, however, are convinced that the American government was behind it.

On June 13, 2007, suspected al-Qaeda insurgents attacked the mosque again and destroyed the two minarets that flanked the dome's ruins. The mosque compound and minarets had been closed since the 2006 bombing.