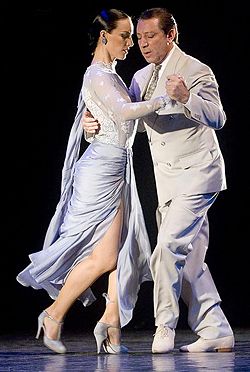 Tango is a social dance form originating in Buenos Aires, Argentina and Montevideo, Uruguay. The musical styles that evolved together with the dance are also known as "tango music."

Early tango was known as tango criollo, or simply tango. Today, there are many tango dance styles, including Argentine tango, Ballroom tango (American and International styles), Finnish tango, Chinese tango, and vintage tangos. The Argentine tango is often regarded as the "authentic" tango since it is closest to that originally danced in Argentina and Uruguay, though other types of tango have developed into mature dances in their own right.

Music and dance elements of tango are popular in activities related to dancing, such as figure skating, synchronized swimming, etc., because of its dramatic feeling and its cultural associations with romance and love.

The dance originated in lower-class districts of Buenos Aires and Montevideo. The music derived from the fusion of music from Europe, the South American milonga, and African rhythms. Jorge Luis Borges in "El idioma de los argentinos" writes: "Tango belongs to the Rio de la Plata and it is the son of Uruguayan ‘milonga’ and grandson of the ‘habanera.’" The word tango seems to have first been used in connection with the dance in the 1890s. Initially it was just one of the many dances, but it soon became popular throughout society, as theaters and street barrel organs spread it from the suburbs to the working-class slums, which were packed with hundreds of thousands of European immigrants. In the early years of the twentieth century, dancers and orchestras from Buenos Aires traveled to Europe, and the first European tango craze took place in Paris, soon followed by London, Berlin, and other capitals. Towards the end of 1913 it hit New York City in the United States, and Finland. In New York around 1911, the name "tango" was often applied to dances in a 2/4 or 4/4 rhythm such as the one-step. The term was fashionable and did not indicate that tango steps would be used in the dance, although they might be. Tango music was sometimes played, but at a rather fast tempo. Instructors of the period would sometimes refer to this as a "North American Tango," versus the "Rio de la Plata tango" also called "Argentine Tango." By 1914, more authentic tango stylings were soon developed, along with some variations like Albert Newman's "Minuet" tango.

In Argentina, the onset in 1929 of the Great Depression, and restrictions introduced after the overthrow of the Hipólito Yrigoyen government in 1930 caused the tango to decline. Its fortunes were reversed as the tango again became widely fashionable and a matter of national pride under the government of Juan Perón. The tango declined again in the 1950s with the economic recession and with the military dictatorships banned public gatherings, followed by the popularity of rock and roll. The dance lived on in smaller venues until its revival in the 1980s following the opening in Paris of the show Tango Argentino and the Broadway musical Forever Tango.

There are a number of styles of tango: 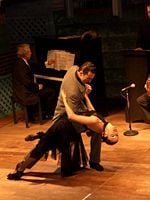 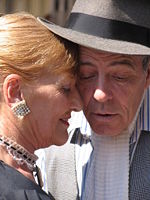 Argentine tango consists of a variety of styles that developed in different regions and eras of Argentina and Uruguay. The dance developed in response to many cultural elements, such as the crowding of the venue and even the fashions in clothing. The Argentine tango styles are mostly danced in either open embrace, where lead and follow connect at arms length, or close embrace, where the lead and follow connect chest-to-chest.

Different styles of Argentine tango are:

These are danced to several types of music:

The "milonguero" style is characterized by a very close embrace, small steps, and syncopated rhythmic footwork. It is based on the petitero or caquero style of the crowded downtown clubs of the 1950s.

In contrast, the tango that originated in the family clubs of the suburban neighborhoods (Villa Urquiza/Devoto/Avellaneda etc.) emphasizes long elegant steps, and complex figures. In this case, the embrace may be allowed to open briefly to permit execution of the complicated footwork.

The complex figures of this style became the basis for a theatrical performance style of the tango seen in the touring stage shows. For stage purposes, the embrace is often very open, and the complex footwork is augmented with gymnastic lifts, kicks, and drops.

A newer style sometimes called "Nuevo Tango" has been popularized in recent years by a younger generation of dancers. The embrace is often quite open and very elastic, permitting the leader to lead a large variety of very complex figures. This style is often associated with those who enjoy dancing to jazz- and techno-tinged "alternative tango" music, in addition to traditional tango compositions. 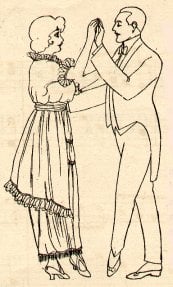 Ballroom tango, divided in recent decades into the "International" (English) and "American" styles, has descended from the tango styles that developed when the tango first went abroad to Europe and North America. The dance was simplified, adapted to the preferences of conventional ballroom dancers, and incorporated into the repertoire used in International Ballroom dance competitions. English tango was first codified in October 1922, when it was proposed that it should only be danced to modern tunes, ideally at 30 bars per minute (i.e. 120 beats per minute, assuming a 4/4 measure).

Subsequently the English tango evolved mainly as a highly competitive dance, while the American tango evolved as an noncompetitive social dance with an emphasis on leading and following skills. This has led to some principal distinctions in basic technique and style. Nevertheless there are quite a few competitions held in the American style, and mutual borrowing of technique and dance patterns does occur.

Ballroom tangos also use different music and styling from Argentine tangos, with more staccato movements and the characteristic "head snaps." The head snaps are totally foreign to the Argentine tango.

The tango spread from the dominant urban dance form to become hugely popular across Finland in the 1950s after the wars. The melancholy tone of the music reflects the themes of Finnish folk poetry; Finnish tango is almost always in a minor key.

The tango is danced in very close full upper body contact in a wide and strong frame, and features smooth horizontal movements that are very strong and determined. Dancers are very low, allowing long steps without any up and down movement. Forward steps land heel first, and in backward steps dancers push from the heel. In basic steps, the passing leg moves quickly to rest for a moment close to the grounded leg.

Each year the Tangomarkkinat, or tango festival, draws over 100,000 'tangophiles' to the central Finnish town of Seinäjoki, which also hosts the Tango Museum. This leads Finns to regard this unlikely provincial town as the "second city of tango" after Buenos Aires.

Argentine and ballroom tango use very different techniques and vocabularies, to the point where some consider them related in name only. In the Argentine tango, the body's center moves first, then the feet reach to support it. In the Ballroom tango, the feet move and the whole body weight follows.

Ballroom tango steps are staccato, and generally follow a specific "slow, slow, quick, quick, slow" rhythm. The "slow" steps are best described as "quick, hold" as the dancer rushes to step and then holds before rushing to the next step. This matches the staccato accents that appear in ballroom tango music.

In Argentine tango, the steps are typically more gliding, but can vary widely in timing, speed, and character, and follow no single specific rhythm. Because the dance is led and followed at the level of individual steps, these variations can occur from one step to the next. This allows the dancers to vary the dance from moment to moment to match the music (which often has both legato and/or staccato elements) and their mood.

The Argentine tango's frame, called an abrazo or "embrace," is not rigid, but flexibly adjusts to different steps, and may vary from being quite close, to offset in a "V" frame, to open. The ballroom tango's frame is more rigid, with the arms more tense and held higher.

There is a closed position as in other types of ballroom dance, but it differs significantly between types of tango. In the Argentine tango, the "close embrace" involves continuous contact at the full upper body, but not the legs. In the ballroom tango, the "close embrace" involves close contact only at the hips and upper thighs, and not the upper torso.

In the Argentine tango, the ball or toe of the foot may be placed first. Alternately, the dancer may take the floor with the entire foot in a cat-like manner. In the international style of tango, "heel leads" or stepping first onto the heel, then the whole foot, are used for forward steps.

Most other types of tango, such as the Finnish and Chinese, are close to the Argentine in their technique and vocabulary.

The Argentine tango is the main subject in these films: