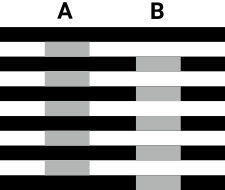 White's illusion is an optical illusion illustrating the fact that the same target luminance can elicit different perceptions of brightness in different contexts. White's illusion is sometimes combined with the Munker illusion (a similar illusion that uses colors instead of grayscale) and referred to as the "Munker-White" illusion. White's illusion, as well as numerous other visual and perceptual illusions, provide a valuable way to investigate how the eye and brain process visual information. Equally, they are used by artists for visual effect, entertaining and satisfying the endless fascination human beings have with novelty and creativity.

White's illusion was discovered in 1979 by M. White, who published his findings in the psychological journal Perception in 1979 and 1981.

The effect of the White illusion is opposite to what would be expected from a simple physiological explanation on the basis of simultaneous contrast (the rectangles sharing the long borders with the dark stripes should appear brighter, not darker). While the effect is not fully understood, theories have been advanced to explain the mechanism that causes the White illusion.

Some theories stay within the framework of simultaneous contrast, but propose that the reactions of different parts of the visual system are responsible for the illusion. Other theories propose that the processing of the T-junctions (the area where the gray stripes intersect adjacent stripes) create the illusion.[1]

The fact that White's illusion behaves in opposition to what would be expected by physiological mechanisms such as simultaneous contrast and lateral inhibition has sparked scientists and researchers into an attempt to discover the actual mechanism that causes the effect. The fact that this illusion contradicts previous assumptions about the visual system may help scientists to come to a better understanding of the mechanisms involved in vision and perception.

Retrieved from https://www.newworldencyclopedia.org/p/index.php?title=White%27s_illusion&oldid=1088390
Categories:
Hidden category:
This page was last edited on 21 November 2022, at 20:55.
Content is available under Creative Commons Attribution/Share-Alike License; additional terms may apply. See Terms of Use for details.