Saint Giovanni da Capestrano, known as John of Capistrano in English (June 24, 1386 – October 23, 1456), was an Italian friar, preacher, theologian, inquisitor, crusader, and inciter of anti-Judaism. He was born at Capistrano, near Naples in Italy, in 1385. He studied and practiced both secular and canon law, but later was imprisoned during a war. There, he renounced his marriage and resolved to serve God. After his release, he sold his property and entered a monastery where the Rule of Saint Francis was strictly observed.

For seven years, Capestrano practiced severe austerities, cared for the sick in the hospitals, and preached the word of God. He became a disciple of Saint Bernardino of Siena, assisting him in public conferences and discussions. However, John was accused of having promulgated heterodox opinions and went to Rome to justify his teachings in the presence of the pope and a group of cardinals, where he defended himself well.

Afterwards, he preached all over Italy. Five popes in succession gave John commissions to represent them in important affairs, and he traveled to France, Austria, Poland, and Germany. His negotiations were highly successful, but none of the popes raised him higher than the position of bishop reportedly due to his own resistance.

Capestrano proved to be of great assistance to the Holy See in the fight against heresy and the threat of Islam. He used his gifts to persecute the Hussites and other religious minorities, including the Jews, many of whom were killed by mobs he incited. Later, when Mohammed II was threatening Vienna and Rome, Pope Callixtus III enrolled John Capistrano to help lead a crusade of 70,000 Christians, which won a great victory at Belgrade in 1455.

Saint John of Capistrano died the following year at the age of 71. He was canonized in 1690.

John was born in the village of Capestrano, in the diocese of Sulmona in the Abruzzi region of central Italy. His father had come to Italy with the Angevin court of Louis I of Anjou, King of Naples. John lived at first a wholly secular life, studied law at the University of Perugia under the legal scholar Pietro de Ubaldis, married, and became a successful magistrate. In 1412, Ladislas of Naples appointed him governor of Perugia, a tumultuous and resentful papal fief held by Ladislas as the pope's agent, in order to effectively establish public order. When war broke out between Perugia and Sigismondo Malatesta in 1416, John was sent as ambassador to broker a peace, but Malatesta threw him in prison.

During the captivity, he put aside his new young wife, with the claim that he had never consummated the marriage. Afterward, he studied with the future St Bernardino of Siena and entered the Franciscan order at Perugia on October 4, 1416. His superiors, fearing this vocation to be a passing fancy, tested him severely, even sending him away twice; but he remained day and night at the door, suffering all trials without complaint. His heroic perseverance disarmed their fears and severity, and he was admitted to religious profession.

At once he gave himself up to the most rigorous asceticism, violently defending the ideal of strict observance and the narrowest reading of orthodoxy and the Franciscan rule. At first following Bernardino as he preached, from 1420 onwards, John himself spoke with great effect in many cities.

Unlike most Italian preachers of repentance in the fifteenth century, John of Capestrano was most effective in the north, in Germany, Bohemia, Austria, Hungary, and Poland. The largest churches could not hold the crowds that came to hear him, so he preached in the piazzas: at Brescia he reportedly preached to a crowd of 126,000. When he was not preaching, he was writing tracts against heresy of every kind. This facet of Capestrano's life is covered in great detail by his early biographers, Nicholas of Fara, Christopher of Varese, and Girolamo of Udine. While he was thus evangelizing, he was actively engaged in assisting Bernardino in the reforms of the Franciscan Order, largely in the interests of more rigorous hierarchic discipline.

Like Bernardino, he greatly emphasized devotion to the name of Jesus. He and Bernadino were accused of heresy on this account. In 1429, John, together with other strict Franciscan friars, was called to Rome on the charge of heresy. Capestrano was chosen by his companions to defend them, and the friars were acquitted by the commission of Cardinals.

After this, John was frequently deployed to embassies by Popes Eugene IV and Nicholas V. In 1439, he was sent as legate to Milan and Burgundy to oppose the claims of the Antipope Felix V; in 1446, he was on a mission to the King of France; and in 1451, he went at the request of the emperor as apostolic nuncio to Austria. During this period, John visited all parts of the Empire, preaching and combating the heresy of the Hussites; he also visited Poland at the request of King Casimir IV.

As legate, or inquisitor, he persecuted the last Fraticelli (heretical Fanciscans) of Ferrara; the Jesuati of Venice; the Jews of Sicily, Moldavia and Poland; and, above all, the Hussites of Germany, Hungary, and Bohemia. His aim in the last case was to make conferences impossible between the representatives of Rome and the Bohemians, for every attempt at conciliation seemed to him to be conniving at heresy.

Capistrano and the Jews

Unfortunately, John's oratory was not only used to inspire religious faith, but also to incite mobs to conduct the mass murders of Jews in several cities in Germany.

In his discourses, John accused the Jews of killing Christian children and of desecrating the host. The Jews trembled at his approach, for his sermons seemed like invitations to riot. His admirers called him "the scourge of the Judeans." The Bavarian dukes, Louis and Albert, influenced by Capistrano's agitations, drove out the Jews from their duchies; in some places in Bavaria Jews were forced to wear the degrading Badge on their coats (1452). Under John's influence, the reigning duke of Franconia, Bishop Godfrey of Würzburg, revoked the privileges he had granted to the Jews, and decreed their banishment. 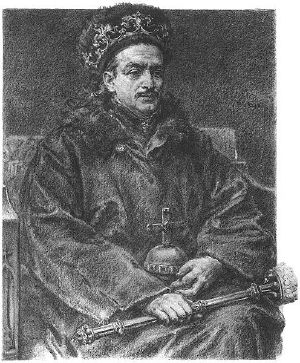 Casimir IV Jagellon at first resisted Juan of Capistrano's pressure to revoke protection of the Jews, but later relented.

When Capistrano arrived at Breslau, a report was circulated that a certain wealthy Jew named Meyer had bought a host from a peasant and desecrated it. The local authorities used this as a pretext to arrest the representatives of the Jewish community and confiscate their houses and property for the benefit of the city. The investigation of the alleged blasphemy was conducted by Capistrano himself. Like many other inquisitors, he used torture to force "confessions" and more than 40 Jews were burned at the stake in Breslau June 2, 1453. Others, fearing torture, committed suicide. A rabbi by the name of Pinheas hanged himself. The remainder of the Jews were driven out of the city, while their children of tender age were kidnapped and baptized by force.

In Poland, John cooperated with the archbishop Zbigniev Olesniczki in pressuring King Casimir IV to abolish the privileges which had been granted to the Jews in 1447. The king at first refused to comply, but when the Polish army was defeated September 1454 in a war with the Teutonic Order assisted by the pope and the Polish Catholic Church, the clergy announced that God had punished the country on account of the king's protection of the Jews. Casimir yielded and revoked the privileges which the latter had enjoyed. This led to persecutions of the Jews in many Polish towns.[1]

Victory over the Muslims

Finally, after the Fall of Constantinople, when Mohammed II was threatening Vienna and Rome, Pope Calixtus III sent him at the age of 70 to preach and lead a Crusade against the invading Turks. At the Diet of Frankfurt in 1454, John succeeded in gathering troops together.

In the summer of 1455, with Capistrano leading a contingent, helped John Hunyadi to raise the siege of Belgrade, which was being blockaded by Mahommed II. Marching at the head of the crusaders, John entered Belgrade at the head of the army. This General of the Friars Minor won a remarkable victory, when 40,000 Muslims reportedly perished, but virtually none among the latter. The saint himself died of bubonic plague at Illok, Hungary the following year at the age of 71.

He is regarded as a martyr, for enemies of the faith twice succeeded in giving him poison, which was ineffectual. “An infinity of miracles” followed his death. He was canonized in 1690.

Saint John of Capistrano, in spite of this restless life, found time to uphold both in his writings and his speeches the most advanced theories upon the papal supremacy as opposed to those of the church councils. He left behind 19 volumes of his writings and more than 700 letters.

After the conquest of Constantinople, the Turks attacked the fortress at Belgrade, with the victory of the Christians, due in large part, to the zeal and prayers of Saint John. The Feast of the Transfiguration was instituted to commemorate the event. Unfortunately, his heresy-hunting and Jew-baiting left a legacy of which the Catholic Church cannot be proud. It is a reflection of the prevailing norms of the Church at the time that in 1690, Saint John could be canonized despite his violent persecution of religious minorities. His feast day is October 23.

St. John of Capistrano is patron saint of the Spanish mission outposts in California and Texas. He won lasting tribute in popular culture in Leon Rene’s famous song, "When the Swallows Come Back to Capistrano," which romanticizes the return of the little birds to the old Spanish mission, San Juan Capistrano.

Retrieved from https://www.newworldencyclopedia.org/p/index.php?title=Saint_John_of_Capistrano&oldid=1092503
Categories:
Hidden category:
This page was last edited on 22 December 2022, at 19:54.
Content is available under Creative Commons Attribution/Share-Alike License; additional terms may apply. See Terms of Use for details.