Bartholomew was one of the 12 Apostles of Jesus. He is mentioned as the sixth apostle in the three Synoptic Gospels (Matthew 10:3; Mark 3:18; Luke 6:14), and as the seventh in the Book of Acts (1:13). He also appears as one of the witnesses of the Ascension (Acts 1:4, 12, 13). In Christian tradition he is known as the unfortunate saint who was skinned alive.

Bartholomew (Greek: Βαρθολομαίος, transliterated "Bartholomaios") comes from the Aramaic bar-Tôlmay (תולמי‎‎‎‎‎-בר‎‎), meaning son of Tolomai (Ptolemy) or son of the furrows (perhaps a ploughman). Based on this meaning, it is likely that Batholomew was originally not a given name, but a family name. Often identified as the Apostle Nathanael little is known of his activities as a disciple other than what is related in the Gospel of John concerning Nathanael's first meeting with Jesus. After the Resurrection, he is traditionally believed to have preached in India and Armenia. He is the patron saint of the Armenian Apostolic Church, and many miracles are reported surrounding his relics.

In the Gospel of John (John 1:45-51), Nathanael is introduced as a friend of Philip and notes that he came "from Cana in Galilee." Hence, some commentators have concluded that Bartholomew was the bridegroom at the wedding feast of Cana. On the other hand, critical scholars point out that John's Gospel seemingly contradicts the Synoptics in portraying several major disciples as determining to follow Jesus at the Jordan River, where they have gone to be baptized by John the Baptist, whereas the Synoptics have them meeting him for the first time in Galilee, where they are working as fishermen. Thus, some scholars are content to simply recognize that the Gospels do not agree about the names of the disciples, and that Nathanael and Bartholomew are probably different persons.

Nathanael is described as initially being skeptical about the Messiah coming from Nazareth, saying: "Can anything good come out of Nazareth?" Nonetheless, follows Philip's invitation. Jesus immediately characterizes him as "an Israelite indeed, in whom is no deceit." Some scholars hold that Jesus' quote "Before Philip called you, when you were under the fig tree, I saw you," is based on Jewish figure of speech referring to studying the Torah. Nathanael recognizes Jesus as "the Son of God" and "the King of Israel." He reappears at the end of John's gospel (John 21:2) as one of the disciples to whom Jesus appeared at the Sea of Tiberias after the Resurrection.

According to Syrian tradition, Bartholomew's original name was Jesus (Yeshua)—a common name at that time, meaning Joshua—which caused him to adopt another name.

Eusebius of Caesarea's Ecclesiastical History states that after the Ascension, Bartholomew went on a missionary tour to India, where he left behind a copy of the Gospel of Matthew. Other traditions record him as serving as a missionary in Ethiopia, Mesopotamia, Parthia, and Lycaonia.

Along with his fellow Apostle Jude, Bartholomew is reputed to have brought Christianity to Armenia in the first century. Thus both saints are considered the patron saints of the Armenian Apostolic Church. There is also a local tradition that he was martyred at the site of the Maiden Tower in Baku, Azerbaijan, by being flayed alive and then crucified head down.

The feast of St. Bartholomew is celebrated on August 24, in the western Church and on June 11, in the Eastern churches. The Armenian Apostolic Church honors Saint Bartholomew, along with Saint Jude as their patron saint. The Coptic Church remembers him on January 1.

The Roman Martyrology says he preached in India and Greater Armenia. Traditionally, he was active in the Armenian city of Albanopolis on the west coast of the Caspian Sea and that he also preached in Mesopotamia, Persia, and Egypt. The apocryphal Gospel of Bartholomew is attributed to him, but it is unfortunately lost. It may be identical to either the Questions of Bartholomew, or the Resurrection of Jesus Christ (by Bartholomew), and was condemned as heretical in the decree of Pseudo-Gelasius.[1]

The manner of his death, said to have occurred at Albanopolis, is uncertain. According to some, he was beheaded; according to others, flayed alive and crucified, head downward, by order of the king for having converted his brother. It is on account of this latter legend that he is often represented in art as having been flayed and holding in his hand his own skin.[2]

The relics of Saint Bartholomew 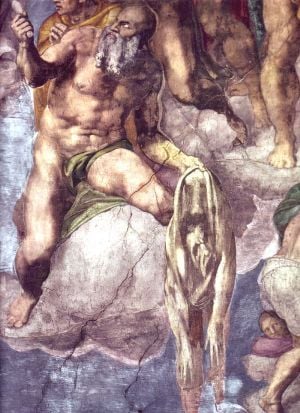 Michelangelo's The Last Judgment shows St Bartholomew holding the knife of his martyrdom and his flayed skin. The face of the skin is recognizable as Michelangelo's

After his martyrdom in (present day) Azerbaijan or Armenia, sometime in the 600s, Bartholomew's body is said to have been transported to Lipari (a small island off the coast of Sicily). In 809, these remains were moved from Lipari to Benevento. In 983, Holy Roman Emperor Otto II brought what had become "Bartholomew's relics" to Rome, to the isle of Tiber, (in the Tiber River) where they were at last housed in the church built in his name (at the basilica of San Bartolomeo all'Isola). In the course of time, the church there inherited an old pagan medical center. This directly led to Bartholomew's name becoming associated with medicine and hospitals.[3]

A cult of Saint Bartholomew developed around his purported relics and was especially popular in southern Italy and England, as they were variously divided and distributed far and wide. One chronicler states that the arm was given as a present to Edward the Confessor from the bishop of Benevento, and that Edward then housed it in a place of honor in Canterbury Cathedral where it is still venerated to this day. Some of his skull was transferred to Frankfurt, and preserved in the Cathedral of Bartholomew.[2]

Popular stories surrounding the relics of Bartholomew's bodily remains have been told and retold for centuries. On the small island of Lipari a tale is recounted of his remains being washed ashore and being first discovered by the local bishop of the time. It is said that this Bishop ordered a group of men to retrieve the body, but that they failed due to its surprising, extreme weight. He then sent out the town's children who, miraculously, quite easily brought the body ashore.

In works of art he is often represented with a large knife, or, as in Michelangelo's Last Judgment, with his own skin hanging over his arm. Tradition holds that in Armenia he was flayed alive and then crucified upside down.