Saint Barbara (d. c. 306 C.E.) was a Christian saint and martyr who died at Nicomedia in today's Turkey c. 306 C.E. Known in the Eastern Orthodox Church as Great Martyr Barbara, Barbara won particular fame for the horrifying fact that her death sentence by beheading was carried out by her own father, a wealthy pagan who had first isolated her in a tower and then denounced her to the Roman authorities when she became a Christian. Her death was attended by numerous miracles, most impressively her father being struck dead by lightning after killing her.

Veneration of Saint Barbara was common from the ninth century until modern times, and she was often depicted in important works of art. She was invoked against the danger of lightning strikes and to insure that a Christian would receive the Eucharist before dying. However, more recently, her historicity has faced major challenges, as there is no reference to her in the authentic early Christian writings. Doubts about the factual basis of her legend resulted in her removal from the official Catholic calendar of saints in 1969. However, she continues to be a popular figure among the faithful in many lands.

Today Barbara is perhaps best known as the patron saint of artillerymen, and miners. Among the many places named for her is Santa Barbara, California. 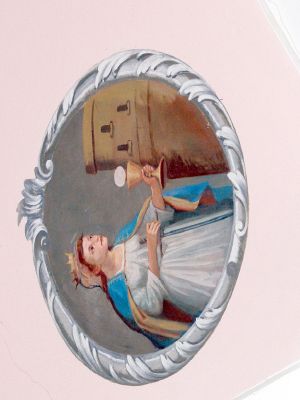 Barbara and her three-windowed tower.

According to the accounts of her life that circulated from the seventh century, Barbara's father was a wealthy pagan named Dioscorus. Because of her great beauty, he carefully guarded her virginity and kept her shut up in a tower in order to preserve her from the outside world.

Having heard the teachings of the gospel by means of a tutor, however, she contemplated life's meaning from her luxurious prison, meditating on the beauties of the natural world outside her window and deciding that the teachings of the church about God and Jesus must indeed be true. Dioscorus' paternal love for Barbara was extremely possessive, but he lavished generous symbols of his affection upon her. Before going on a journey, he commanded that a luxurious private bath-house be erected for her use near her dwelling. During his absence, Barbara altered her father's design and had three windows put in it, as a symbol of the Trinity, instead of the two originally intended. When her father returned, she acknowledged that she was a Christian. He was outraged by this, pressuring her to recant, treating her badly, and ultimately denouncing her to the prefect of the province. This governor, Martinianus by name, had Barbara cruelly tortured and finally condemned to death by beheading. She held to her faith despite her treatment. During the night, the dark prison was bathed in light, and every morning the wounds from her tortures were healed. Torches that were to be used to burn her went out as soon as they came near her skin.

Shockingly, Barbara's father, a loyal Roman citizen who preferred her to die rather than that she remain a Christian, carried out the death sentence by his own hand. In one version of the story, Barbara's beautiful long hair burst into flames after he grabbed it to strike the fatal blow. In punishment for his sin of murdering her, he was struck by lightning on the way home (or immediately in other versions) and his body was entirely consumed by the resulting fire.

In some tellings of her acts, other dramatic details are included. In one, having become a Christian and determined to devote her love to Christ alone, she rejected an offer of marriage that she received through her father. In another, when Dioscorus discovered that she was a Christian, he immediately intended to kill her, but her prayers created an opening in the tower wall, and she escaped. Pursued by her father and guards, she hid in a mountain gorge. There, she stayed hidden until a shepherd betrayed her. One legend holds that the shepherd was transformed into a marble statue, and his herd into a swarm of locusts.

According to a favored tradition, she died on December 4, 306, in her native Nicomedia, Bithynia, Asia Minor. However, other versions place her death in various other locations. 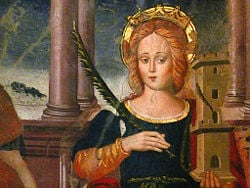 Barbara at the Saint Benedict Church in Nursia

The legendary character of Barbara's story, coupled with the lack of early evidence for her in the historical record, has led both Catholic and secular scholars to doubt the veracity of her life story and even her existence. There is no mention of her in the early martyrologies, and her legend appeared in Christian writings no earlier than the seventh century, a full three centuries after her supposed martyrdom. Her cult did not spread until the ninth century, and versions differ on the location of her martyrdom, which is variously given as Tuscany, Rome, Antioch, Heliopolis, and Nicomedia. Moreover, the name "Barbara" literally means "a barbarian woman," a name which no respectable Roman citizen would give to his daughter. Scholars speculate that the name must have been already in use as a given name at the time when the story came into circulation.

Whatever the facts of her case, Barbara was removed from the Roman calendar of saints in 1969. However, she is still much venerated, both in the West and the East.

Saint Barbara in her tower 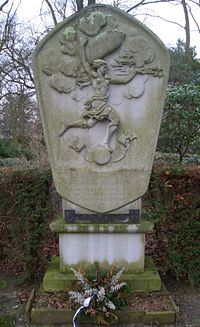 Barbara as the patron saint of lightning storms

The legend that Barbara's father was struck by lightning and consumed by fire caused her to be regarded as the patron saint of people threatened by thunderstorms. To this day, it is also to Saint Barbara that many faithful Christians pray to be protected from lightning and from fires. She was also called upon as intercessor to assure the receiving of the sacraments of penance and eucharist at the hour of death. She was widely venerated from the ninth century onward.

In 1448, a seemingly miraculous occurrence did much to further the spread of the veneration of the saint when a man named Henry Kock was caught in a fire in the Dutch town of Gorkum. Although badly burned, when he called on Saint Barbara for protection, she aided him to escape from the burning house and kept him alive until he could receive the last sacraments.

The legend of Saint Barbara was included in the Golden Legend a collection of dramatic stories of the saints that became a late medieval bestseller, especially after the invention of printing. She is much depicted in art, where she is often shown standing by a tower with three windows, carrying a palm branch and a chalice, sometimes with cannons by her side. 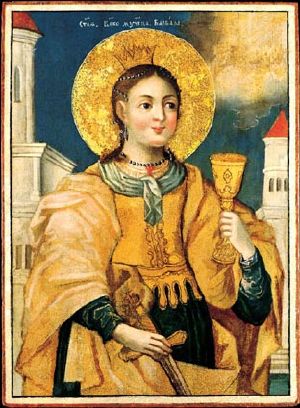 Because of her association with protection from thunder, lightning, and fires, Barbara became the patron saint of artillerymen, as well as armorers, military engineers, gunsmiths, miners and anyone else who worked with cannon and explosives. She may also be venerated by anyone who faces the danger of sudden and violent death in work.

Saint Barbara’s Day, December 4, may be celebrated by a number of military units with roots in the British Commonwealth. In the U.S., the Order of Saint Barbara is a military honor society of the U.S. Army and the U.S. Marine Corps Artillery.

There are many churches dedicated to Saint Barbara throughout the world, including one in Moscow next to Saint Basil's Cathedral and in Yaroslavl. The city of Santa Barbara, California, located approximately 100 miles northwest of Los Angeles, received its name from the Franciscan mission there that was dedicated to her.

Saint Barbara day is celebrated among Arab Christians in Lebanon and other lands in a festival in some ways similar to the North American Halloween. Many Middle Eastern Christians believe that Saint Barbara disguised herself in numerous characters to elude the Romans who were persecuting her, giving rise to the Halloween-style tradition there. The traditional food for the occasion is a bowl of boiled barley, pomegranate seeds, and sugar, offered to masquerading children.

Caribbean practitioners of the Yoruba traditions from Africa sometimes use Saint Barbara's icon to represent the deity known as Shango, who is associated with lightning and holds great powers of determination and commitment.