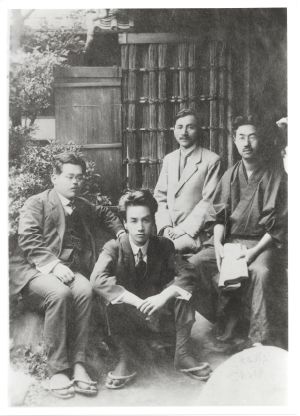 A set photograph of 1919. The second from the left is Ryunosuke Akutagawa. At the far left is Kan Kikuchi.

Ryūnosuke Akutagawa (芥川 龍之介 Akutagawa Ryūnosuke, March 1, 1892 - July 24, 1927) was a prolific Japanese writer and poet, noted for his stylistic virtuosity, and is regarded as the "father of the Japanese short story." Akutagawa wrote no full-length novels, focusing instead on the short story as his main medium of expression. During his short life, he wrote over 150 short stories, including The Nose, The Spider's Thread, The Hell Screen, Autumn, The Ball, In a Grove, and Kappa.

Akutagawa was known for taking trivial objects or events and enlarging on their significance to create a moral lesson or a comment on humanity. The Akutagawa Prize, established in 1935 by Kikuchi Kan in memory of Akutagawa, is Japan’s most prestigious literary award. The winner receives a pocket watch and a cash award of one million yen (about US $10,000). Akira Kurosawa directed the film Rashōmon (1950) based on Akutagawa's stories; the majority of the action in the film was actually an adaptation of In a Grove.

Akutagawa was born at Tsukiji in Tokyo, the son of Toshizoo Niihara, a milkman who owned several dairy farms serving Tsukiji’s foreign residents. He was given the name Ryunosuke, commemorating his birth in the year of the dragon. Akutagawa’s parents were at ill-omened ages when he was born, so to avoid bad luck he was “abandoned” and handed over to his father’s friend, then accepted back into the Niihara family as a “foundling.” Akutagawa’s mother, Fuku Niihara, went insane shortly after his birth, an affliction which Ryunosuke later believed he had inherited. He was adopted and raised by his maternal uncle, Akutagawa Dosho (or Michiaki), from whom he got the family name "Akutagawa." These bizarre events of his early childhood left a deep impression on Akutagawa and left him feeling ashamed and distrustful of others.

During his youth, much of which was spent in the care of his unmarried aunt Fuki, Akutagawa’s interest in literature and the arts was encouraged. He was an avid reader of traditional literature, especially illustrated storybooks (kusazoshi) of the Edo period (1600-1868), featuring ghost stories. Though he suffered from poor health as a child and was prone to convulsions, he excelled in school and started writing stories and poems in elementary school. In middle school, he read widely from Japanese and Chinese literature and translated European authors. During his years at the Tokyo First High School, where he majored in English literature, his friends thought him kind and considerate while outsiders considered him aloof. He graduated second in his class and entered Tokyo Imperial University in 1913, where he studied English literature. He published translations from English and his first original pieces, “Ronen” (Old Age), and “Hyottoko” (The Comic Mask), in a literary periodical. He supported himself by teaching English and editing a newspaper. In 1914, he published his short story Rashōmon, the tale of a peasant in twelfth-century Kyoto who degenerates into a criminal when he steals the clothes of an old woman. This story earned him the praise and encouragement of Soseki Natsume, and he began to attend the Thursday Club meetings at Soseki’s home. Akutagawa first received public recognition for the humorous 1916 story The Nose, about a Buddhist priest’s preoccupation with the unusual length of his nose. Around this time Akutagawa began writing haiku under the haigo (pen-name) “Gaki.”

In 1916, the year he graduated from Tokyo Imperial University, he published more than a dozen stories, including “Imogayu” (Yam Gruel), about sadistic tricks played on a lowly samurai. He demonstrated a gift for transforming grotesque anecdotes into well-crafted stories.

While still a student, he proposed marriage to a childhood friend, Yayoi Yoshida, but his adoptive family did not approve the union. In 1916, while living in Kamakura and teaching English at the naval engineering academy at Yokosuka, he became engaged to Tsukamoto Fumi, whom he married in 1918. His Aunt Fuki lived with the newlyweds and became a surrogate but domineering mother-in-law. They had three children; Akutagawa Hiroshi (1920-1981) was a well-known actor, Akutagawa Takashi (1922-1945) was killed in World War II, and Akutagawa Yasushi (1925-1989) became a famous composer.

In 1917, Akutagawa’s compiled two collections of his earlier stories. The Osaka Mainichi newspaper hired him in 1918 under an exclusive contract, and he became a full-time writer in 1919, publishing a number of major stories. In 1920, at the crest of his popularity, Akutagawa interrupted his writing career to spend four months in China, as a reporter for the Osaka Mainichi Shinbun. The trip was stressful and he suffered from various illnesses, from which his health would never recover. He became engrossed with China’s history, and after his return to Japan, he published his most famous tale, In a Grove (1922).

In 1923, Akutagawa and his family escaped the great Kanto earthquake, but from then until the the end of his life, he suffered from hallucinations and nervousness. His last important work, “Kappa” (1927), although a satiric fable about elflike creatures (kappa), was written in the humorless vein of his last writings and reflects his depressed state at the time.

In 1927, he tried to take his own life, together with a friend of his wife Fumi, but the attempt failed. On July 24, 1927, he committed suicide by taking an overdose of Veronal prescribed by his family doctor, the poet Saito Mokichi. His dying words in his will were ぼんやりとした不安 (Bon'yaritoshita fuan, meaning "dim uneasiness"). In 1935, his lifelong friend Kan Kikuchi established Japan's most prestigious literary award, the Akutagawa Prize, in his honor. The winner of this prize is awarded a pocket watch and a cash award of one million yen (about US $10,000).

Shuju no Kotoba is a collection of Akutagawa’s proverbs or aphorisms and literary works. “Shuju” is a disparaging term meaning dwarf or fool; Shuju no Kotoba translates "Words of a Fool". The foreword contains the following introduction:

Shuju no Kotoba does not necessarily express my thoughts. It merely expresses the changing processes of my thinking. It looks, not like one single blade of grass, but like an earnest vine---- the vine is flourishing and expanding into several branches.

In this work there more than 180 small titles, for example, “Stars,” “Nose,” “Like and Dislike,” “Mysticism,” and “Liberty and Destiny.” In a piece entitled “Shushin” (“Self Discipline”), Akutagawa equates that the word "moral" with "daily needs." He compares the role of proverbs, morals and aphorisms to the road signs that tell drivers to "Keep Left," saying that they replace mental effort and originality. Resorting to proverbs in daily life makes it possible for one to save time and labor, but impossible for us to consider what is really the best solution for a problem. People who easily resort to morals and proverbs lack an economic point of view. People who easily obey proverbs show a lack of courage and effort.

A famous critic remarked that all of Akutagawa’s could fit under the title Shuju no Kotoba since all his works had the quality of an adage or proverb. Akutagawa’s works were all short stories, and his main motifs were mostly trivial things. The trivial things in his works The Nose, Yam Gruel, and Handkerchief, were well described, with wit, taste, and a sense of the joys and sorrows of life. Natsume Soseki discovered Akutagawa’s talent early in his career and encouraged and supported him.

While reading during his childhood, Akutagawa was carried away by the sense residing in the English and Chinese languages. For him a word by itself represented a thought and the process of thinking. For Akutagawa, finding just the right words to express his thoughts signified victory or defeat. His graduation thesis at Tokyo University was a commentary on William Morris, an English artist and writer, best known as a designer of wallpaper and patterned fabrics. Akutagawa indicated that he was interested in Morris because of his concern with the “lesser arts.”

The story was first published in 1915 in Teikoku Bungaku. Despite its name, it provided no direct plot material for the Akira Kurosawa movie Rashōmon, which was based on Akutagawa's 1921 short story, In a Grove. However, the framing sequence of the film reflects certain elements of the story, such as the theft of a kimono and the discussion of the moral ambiguity of stealing in order to survive.

The story recounts an encounter between a servant and an old woman in the dilapidated Rashōmon Gate, where unclaimed corpses were sometimes dumped. The man, recently fired, is contemplating whether to starve to death or to become a thief so he can survive. When he goes upstairs in the building to find a place to sleep, he encounters an old woman, who is cutting the hair off of the dead bodies on the second floor. Disgusted, he decides then that he would rather take the path of rightousness even if it means starvation. He is furious with the woman, but she explains that she steals hair to make wigs so she can survive. In addition, she tells him that the woman whose body she is currently robbing cheated people during her lifetime, by selling dried snake meat and claiming it was fish. The old woman says that this was not wrong because it allowed the woman to survive, and in turn entitles her to steal from the dead person, because if she doesn't, she too will starve. The man responds "Then, you won't mind if I strip you of your clothes. If I don't, I too will starve." He brutally disrobes the old woman, takes her kimono and disappears into the night. In later versions of the story, the last line is "Where the servant went to, nobody knows."

Retrieved from https://www.newworldencyclopedia.org/p/index.php?title=Ryunosuke_Akutagawa&oldid=1092441
Categories:
Hidden category:
This page was last edited on 22 December 2022, at 18:27.
Content is available under Creative Commons Attribution/Share-Alike License; additional terms may apply. See Terms of Use for details.