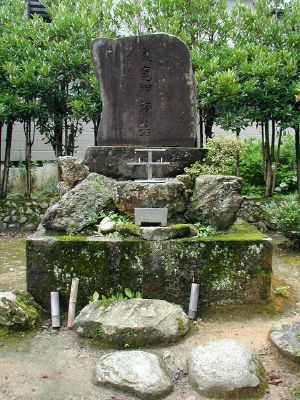 Ryōkan (良寛) (1758-1831) was a Zen Buddhist monk of the Edo period (Tokugawa shogunate 1603-1864), who lived in Niigata, Japan. He was renowned as a poet and calligrapher. He soon left the monastery, where the practice of Buddhism was frequently lax, and lived as a hermit until he was very old and had to move into the house of one of his supporters. His poetry is often very simple and inspired by nature. He was a lover of children, and sometimes forgot to go on his alms rounds to get food because he was playing with the children of the nearby village. Ryōkan was extremely humble and refused to accept any official position as a priest or even as a "poet." In the tradition of Zen, his quotes and poems show that he had a good sense of humor and didn't take himself too seriously. His poetry gives illuminating insights into the practice of Zen. He is one of the most popular Zen Buddhists today.

Ryōkan (良寛) was born at Izumozaki in Echigo Province, on the coast of the Sea of Japan, in 1758. His father, Yamamoto Inan, was an owner of a famous shipping agency, a village headman, a Shinto priest and a haiku poet. The Izumozaki harbor had been prosperous because the gold from a mine on Sado Island, situated off the coast of Echigo Province, was transported through Izumozaki to Edo (now Tokyo). During Ryōkan’s childhood the Izumozaki harbor silted up, and also his father’s ship was wrecked, causing a decline in the family business. Ryōkan was a silent child, indifferent to worldly gain and fond of reading. At the age of eleven, he studied Japanese and Chinese classics.

When he was fifteen years old he entered his father’s business, but did not do well, meeting with failure after failure until he was given the nickname hiru andon (a paper-covered night light burning during the day, a fool or dunce). At the age of eighteen he practiced Zen meditation under the monk Genjyo Haryo in the Kosho-ji temple. He named himself Daigu (big patient; big, wise, and calm) Ryōkan. When he was 21, he met an itinerant monk, Kokusen, and followed him to his Entsu-ji temple at Tamashima in the Bitchu province. There he practiced an ascetic life for 12 years. His mother died in 1783. After Kokusen’s death in 1791, Ryōkan began to travel to various parts of Japan as a mendicant monk (one that relies on charity). His father committed suicide in 1795.

It is not clear where Ryōkan went on his travels; he is mentioned in an episode in the journal of a scholar of Japanese classical culture named Kondo Banjyo, who was traveling in Tosa Province on Shikoku Island. In this journal Kondo wrote about an encounter with Ryōkan. One evening as darkness approached and rain began to fall; Kondo was traveling along a country road in Tosa when he found a hermitage at the foot of a mountain. In this hermitage he found a skinny, pale monk sitting by a fire. This monk said he had no food and no clothes to protect him from the cold winds. After his first greeting, the monk never said anything more, never did Zen meditation, never slept, never chanted Nembutsu (invocation of Amida Buddha). When Kondo spoke to him, he only smiled. Kondo thought the monk was a madman. Next day it was raining and Kondo stayed in the hermitage, but still the monk never spoke. In the hermitage there was only one book, a volume of Chuang-tzu (a Chinese thinker of 4 B.C.E.). Kondo produced his folding fan and asked the monk to write an inscription on it. The monk painted a picture of Mount Fuji with a sentence underneath, and signed it, “written by Ryōkan of Echigo.” Other writers reported interesting episodes and odd incidents about Ryōkan. Because of the strange and beggarly appearance of the mendicant monk, village people mistook him several times for a thief or an arsonist, and he was buried alive and subjected to other abuse.

Around his thirty-ninth year, Ryōkan returned to his hometown, Echigo. Since he had abandoned his home to become a monk, he had no place to stay. His old friends and classmates arranged for him to live at a hermitage named gogoan, which belonged to Kokujyo-ji temple. Ryōkan lived in this “gogoan” for 36 years. During this time he never had a temple, never chanted Nembutsu or did the work of a monk. Part of his hermitage burned, and he lived at a small Shinto shrine for ten years before returning to the grounds of Kokujyo-ji temple. He studied Manyoshu (ancient Japanese poetry) and ancient calligraphy, and carried on literary activities, especially as a poet. Several famous Confucian scholars and calligraphers visited Ryōkan. Around 1826 he met a young nun, Teishin, who became his sole disciple. Ryōkan developed a strong master-pupil relationship with her. After his death in 1831, Teishin compiled Hachisu no tsuyu ( “Dew on the Lotus,” 1835), a collection of Ryōkan’s haiku and waka poems.

Ryōkan’s Poetry and His Popularity in Japan

Several great monks, such as Shinran, Nichiren and Dogen, founded new Buddhist schools and wielded great influence in Japan. Ryōkan, in contrast, never had even one temple. He was a simple mendicant priest, and very often lax and free. However, to this day he remains the Japanese people’s favorite figure.

There are many popular legends about Ryōkan. For example, when a bamboo sprout was growing under the floor of his house, he made a hole in the floor and said it was to encourage the bamboo to grow. After this bamboo grew until it almost reached the ceiling, he made another hole in the ceiling and through the roof. Some children who were flying kites asked Ryōkan to write calligraphy. As he wrote, “The big wind in the celestial,” the kite flew higher and higher right before their eyes. One day he was playing hide-and-seek with the children. On his turn he hid himself in the rice field. The children could not find him, and as it was getting dark, they went home. Early the next morning when a farmer came to the rice field, he found Ryōkan hiding there. The farmer asked in surprise what he was doing there. Ryōkan replied, “Please be quiet! If you speak in such a loud voice, I will be found by the children!” Ryōkan lived a very simple, pure life, and stories about his kindness and generosity abound.

Kawabata Yasunari (川端 康成, June 14, 1899 – April 16, 1972) was a Japanese novelist whose spare, lyrical and subtly-shaded prose won him the Nobel Prize for Literature in 1968. He was the first Japanese to win the award. When Kawabata gave a memorial speech after receiving the Nobel Prize, he introduced a poem by Ryōkan and said that Ryōkan had bequeathed the essence of Japan. There are many men of letters, calligraphists, writers, poets and waka poets who idolized Ryōkan in Japan. Now Ryōkan’s poems are translated into many other languages.

Ryōkan refused many times to be honored or designated a professional Buddhist monk or poet.

"Who says my poems are poems?

These poems are not poems.

When you can understand this,

Then we can begin to speak of poetry."

When Ryōkan was 69 years old, he met a young nun, Teishin, who was 29 years old. Teishin had been born the daughter of Okumura Gohei, the samurai of the domain of Nagaoka in Echigo province. She had married a doctor at the age of 17, and five years later after his death (or a divorce) she became a Buddhist nun. She was said to be a beautiful and literary woman. Without Teishin’s efforts, Ryōkan would have remained an unknown and his poetry would never have reached the people of Japan. Teishin’s Hachisu no tsuyu (“Dew on the Lotus”), a collection of Ryōkan’s haiku and waka poems published in 1835, included several love poems between Ryōkan and Teishin.

TEISHIN
"Playing temari [a ball] with the village children

How fruitful and inexhaustible it is!"

RYŌKAN
"Won't you bounce the ball?

You must repeat again!"

TEISHIN
"Was it really you

I saw,
Or is this joy
I still feel

We doze
And talk of dreams
Dream, dream on,

As much as you wish."

On his deathbed, Ryōkan offered the following poem:

"showing their backs
then their fronts

the autumn leaves scatter in the wind"