Dōgen (also Dōgen Zenji 道元禅師; Dōgen Kigen 道元希玄, or Eihei Dōgen 永平道元) (January 19, 1200 - September 22, 1253) was a Japanese Zen Buddhist teacher, philosopher, and founder of the Soto school of Zen in Japan. Zenji is a title meaning zen master, and the name Dōgen means roughly "Source of the Way." As a Zen master, he presented the idea of the primacy of zazen (seated meditation) and gave philosophical analyses of the teachings of Zen. He conceived the existence of all beings and phenomena as the work of truth, thereby explicating the spirituality of the self and the world. Dōgen gave philosophical analyses of central issues of philosophy such as fusion of being (ontology); knowing (epistemology); bodily actions and practices; the relationship between time and being; temporality and eternity of being; truth and being; and the concept of “body-mind.” His philosophy has been compared with phenomenology.

His major work, Shobogenzo (literally, "Treasury of the True Dharma Eye") is considered by many to be the best philosophical work written in the Japanese language. To this day, the Soto School has been one of the major Buddhist schools in Japan. Dōgen contributed to the formation of the spiritual foundation of Japanese culture through his philosophical analyses of Zen teachings. 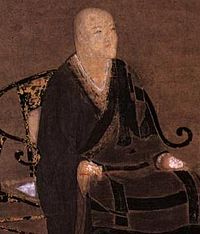 Dōgen came from a noble family and quickly learned the meaning of the word mujo (impermanence). His parents died when he was still young, and it is said that this early glimpse of impermanence inspired him to become a monk. He first went to Mt. Hiei, which was the headquarters of the Tendai school of Buddhism. At a young age, he raised the question: "Both the esoteric and exoteric doctrines of the Buddha teach that Enlightenment is inherent in all beings from the outset. If this is so, why do all the Buddhas, past, present, and future, seek Enlightenment?" This doubt led him to study Buddhism under the Rinzai teachers Eisai (1141 - 1215) and Myozen for nine years.

Continuing his quest for the truth, he made the risky ocean passage to China, accompanying his teacher, Myozen, at the age of 24. After visiting several monasteries he began to study with Ju-tsing (J. Nyojo), the thirteenth Patriarch of the Ts'ao-t'ung lineage of Zen Buddhism in Mt. Tien-tung (J. Tendo). The lineage became known by its Japanese pronunciation, Soto, in Japanese. Two years later, he realized liberation of body and mind.

Dōgen came back to Japan after four years abroad. In 1244 he established Eihei-ji Temple in Echizen, now Fukui, to spread his approach to Buddhism. The temple remains one of the two head temples of the Soto sect today.

He spent the remaining ten years of his life teaching and writing there. Dōgen's masterpiece is the Kana Shobogenzo (literally "Treasury of the True Dharma Eye"), a collection of sermons on the Buddhadharma in 95 fascicles on topics ranging from monastic practices to the philosophy of language, being, and time. This work is considered the best philosophical work written in the Japanese language. Dōgen expressed his thoughts in a highly condensed and unusual expression that resists interpretation. He emphasized the absolute primacy of zazen, or seated meditation, and the inseparability of practice and Enlightenment.

While it was customary for Buddhist works to be written in Chinese, Dōgen often wrote in Japanese, conveying the essence of his Zen thought in a style that was at once concise, compelling, and inspiring. A master stylist, Dōgen is noted not only for his prose, but also for his poetry (in Japanese waka style and various Chinese styles). Dōgen's use of language is unconventional by any measure. As Dōgen scholar Steven Heine remarks: "Dōgen's poetic and philosophical works are characterized by a continual effort to express the inexpressible by perfecting imperfectable speech through the creative use of wordplay, neologism, and lyricism, as well as the recasting of traditional expressions." (Heine 1997, 67)

His most notable successor was Keizan (1268 - 1325); together Dōgen and Keizan are regarded as the founders of the Soto school.

Did you know?
Dogen studied Zen Buddhism in China and then spread the teachings and practice of Zen meditation in Japan

Buddha was said to have reached Enlightenment while he was engaged in zazen - seated meditation. Dōgen conceived the practice of seated mediation as the essence of Buddhism. Dōgen conceptualized the primacy of zazen as Shikandaza (Sheer Seated Meditation): Shikan means “utmost” or “fervently” or “simply”; da means “hitting” in the sense of “throwing oneself”; za means “sitting.” Shikandaza basically means “to throw oneself to and fervently do zazen.”

Dōgen interpreted zazen not as a separate means to reach the goal of Enlightenment, but as a manifestation of Enlightenment itself. Seated mediation is often interpreted as a practical method to reach the state of the Enlightenment. Dōgen developed the idea of the oneness of practice and embodiment; becoming and being; doing and attainment. Based upon this concept of the unity of being and doing, he presented authentic zazen as the presence and the working of Buddha nature. Buddha nature is also conceived not only as a static essence but also as a dynamic working principle.

In the fascicle of “Being-time” and others in Sobozenzo, Dōgen explicated the temporality of being. His concept of Shikandaza is rooted in his ontology. For Dōgen, the fact of to-be or existence is a temporal event or process where eternal truth is manifested. Existence is an event where eternity and the moment, permanence and change, meet and cross over. Existence is possible only when eternal truth manifests itself in time.

Truth: Being and Having

Knowing the truth is therefore not a matter of “having” or “finding” truth as an object. One already exists in truth. When one drops all one’s conscious acts, truth discloses itself. Dōgen’s epistemology is not separate from his ontology, and knowing and being are intricately fused within the context of practice.

Enlightenment is the realization of the fact that all being, including the self, exists in truth. The pre-condition for realizing Enlightenment is the elimination of all conscious acts and disturbances in the mind, including conscious acts of attempting to find truth. If one prepares oneself, truth discloses itself. Dōgen explains the relationship between the self and truth by an analogy of water and moon:

Enlightenment is like a reflection of the Moon on water.
The Moon does not get wet and the water is not disturbed.
( Suigetsu, “Water and Moon” in Shobogenzo, "Treasury of the True Dharma Eye")

This passage explains the relationship between mind and truth. If one reaches an absolutely tranquil state of mind like still water, the truth that is working in the entire cosmos can be reflected in one’s mind. Enlightenment is the state where the truth is naturally reflected in the mind just like the Moon is reflected on still and calm water without distortion. The truth discloses itself without one’s preconception (“The Moon does not get wet.”) and mind also becomes like a mirror that reflects truth as it discloses itself (“the water is not disturbed.”).

It is an irony of the mechanism of consciousness that the more one tries to calm the consciousness and reach tranquility, the more it is disturbed. In “The Issue at Hand” of Shobozenzo, Dōgen warns not to attempt to find truth but to prepare oneself so that one can be opened up to truth in the way that truth shows itself.

One is enlightened by and opened up to truth with the advent of truth. Enlightenment is also an experiential or existential realization that the truth is at work in existence, including the existence of the self.

Enlightenment in Zen Buddhism is also an attempt to arrive at the original state of the human condition by liberating oneself from all kinds of prejudices and preconceptions. While Husserl thought that presuppositionlessness was possible by taking a certain mental stance (such as “epoche”) within the realm of consciousness, Dōgen disagrees with this idea. Dōgen holds that a presuppositionless state is not possible through any mental action within consciousness and that it requires bodily actions, zazen in particular. Dōgen conceived mind and body in unity as one concept “body-mind,” and expressed Enlightenment as “dropping-off-body-mind.” This concept is rooted in Dōgen’s insight that one’s consciousness is inseparably fused with body, and the whole body-mind is also fused with the entire being of the cosmos. Later Husserl realized the limits of his earlier attempt and developed the phenomenology of life world with recognition of the human being’s involvement with the world. As for the realization of the inseparable involvement of the self and the cosmos, Dōgen’s view can be compared with Heidegger’s “being-in-the-world” and Merleau-Ponty’s “body-subject.”